Time for a reality check.

Who do you believe on house prices? Headline grabbing journos or the Reserve Bank?

Who do you want to believe on property prices — sensationalist journalists looking for a front page story, career doomsday merchant Harry Dent or the boring old Reserve Bank of Australia? Well, even though I love making tiring economics and business stuff entertaining, readable and educational, when it comes to forecasting and economic assessments, I rely more on the Reserve Bank of Australia.

That’s not to say the RBA is always right. I called the Bank out ‘big time’ when it kept interest rates too high for too long when the GFC was starting, and then a few years back before it moved to their historic low cash rate of 1.5%.

Forecasting is a tough game but the guys and gals at the RBA are well-qualified, they’re not sensationalists and they know the importance of their job. And understanding how house prices are pulling back in Sydney and Melbourne is economically crucial, so there would be a lot of brainpower going into their best guessing on this subject.

I like the US star doomster Harry Dent as a person only. He keeps tipping doom, knowing one day he will be right! Anyone listening to him and others, who have been predicting real estate and stock market Armageddon for years, could have lost a lot of capital gain.

The Daily Mail in the UK reported this in February this year: “A leading American economist who correctly predicted the 2008 financial crisis has claimed Australian housing prices will plummet by 30 to 60 per cent when the country's stocks crash 'just weeks from now'.

“Harry Dent has predicted Australia's stocks will crash by up to 80% in the coming days, creating an opportune time in the housing market for home buyers to snap up properties.

“The author also warned of a global real estate and stock market crash between the end of the year and 2020, according to news.com.au.”

Right now a lot of people think house prices are already on a big slide, but this chart shows you the slide over the past year and bad news headlines on property have been coming for at least that time. 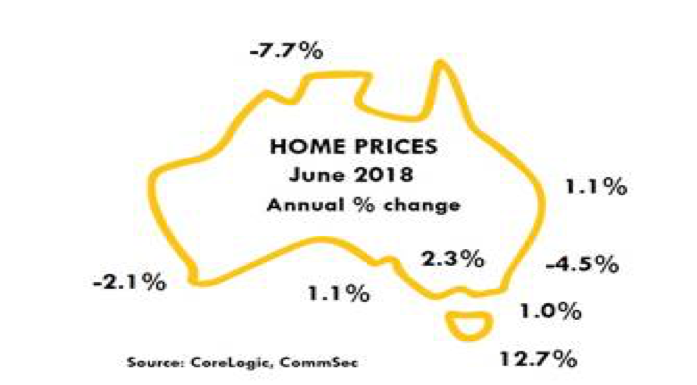 Sydney is down only 4.5% after a 75% rise over five years! Melbourne is still rising. And what about Hobart! Now the numbers will get more negative for Sydney and Melbourne but there are no signs of an Armageddon.

I interviewed Charles Tarbey, the founder of Century 21, for my radio podcast show on Monday. He said prices are coming back and expects places like Sydney to eventually lose about 15% over the next year or so. Charles says some suburbs could lose more, while others will lose less.

It's a buying opportunity for first homebuyers and those who missed out at auction over the past few years. For those who bought at too high prices, well, that’s happened to lots of us over time. But time will eventually repay you with higher prices if you stay in the house long enough.

What’s important is that we all stay employed and our businesses remain profitable, which is why we don’t need house price alarmists spooking consumers, just as consumer confidence is picking up.

The RBA’s latest minutes from its board meeting say the Big Bank likes the house price deflation and it doesn’t see a collapse on the horizon.

In a very calm way, the Bank said: “Housing prices had declined in Sydney and Melbourne following significant increases in previous years.

“Housing prices had fallen by almost 5% in Sydney over the preceding year.”

Interestingly the RBA is comfortable about household debt, but we’re not alone in loading up on debt on our beloved properties. “Household debt has increased by more than household income over the preceding three decades in many countries, but particularly so in Australia.”

But where we are a little more special is that we are more inclined to become landlords or property investors per head of population.

Karen Maley in the SMH has pointed this out today. “Where we are unusual is that we're more inclined than most to borrow in order to invest in housing, and this has helped push Australia's household debt to income ratio to a record high of close to 200%,” she wrote.

What the RBA knows is that as long as we can grow our economy strongly, this high debt to income problem becomes less worrying. That’s why I love our positive economic future via the great outlook for the global economy, which was reinforced by the latest IMF forecast. “The International Monetary Fund (IMF) left its forecast for global economic growth unchanged at 3.9% in 2018 and 2019, above the 40-year average growth rate of 3.5%,” CommSec’s Craig James pointed out yesterday. “If realised, it would be the fastest pace of growth in seven years. While there was no update for Australia, economic growth is forecast to grow by 3.0% in 2018 and 3.1% in 2019.”

If the economic road ahead was weak, all these house price surges powered by too much debt would be a big worry. However, it’s highly likely that we have two solid years of economic growth ahead and with expected wage rises and lower house prices, it makes a pretty economic picture.

This is what the RBA is seeing and they can count me in as a Big Bank believer!