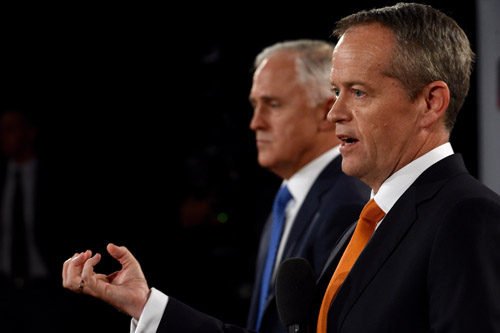 Which Aussie PM will dine with the next US President? Here's my guess

Here’s a relevant question for stock markets and us — will Malcolm Turnbull be dining with Hillary Clinton next year as leaders of their respective countries or will it be Bill Shorten and Donald Trump? Imagine that coupling!

Personally, I think the election will be close. The Coalition’s super changes really leave them vulnerable and undermine the reason for having a double dissolution. On the other hand, the negative gearing changes and the whole Rudd-Gillard-Rudd years, combined with broken promises on matters such as the carbon tax, remain pretty fresh in voters’ minds.

Against that, Chris Bowen looks more credible as a potential Treasurer, though he has some tricky policies to sell, which could raise the accusation that they’re well-meant policies but where’s the money coming from?

Right now, Bill Shorten looks impressive when he points out that the Budget Deficit has risen under the Abbott-Turnbull regimes but he always leaves out that he and the Greens stopped the too hard and fiscally responsible Joe Hockey’s first Budget. Then for the second, the economy was slowing thanks to the end of the mining boom, so deficits always grow in those times.

Isn’t it a pity that politicians rearrange reality to help them win power? Oh well, they all do it — even Malcolm.

This is all well and good but let’s get back to when Bill meets Donald or Malcolm meets Hillary.

An insider tells me that a former Prime Minister, whom I won’t name because my source could be exposed, has made the observation that Labor is under pressure with the primary vote. That said, that was before the Sky News People’s Forum in Sydney’s west, where Bill was declared the winner. This is an eight-week campaign, so a lot can happen over that time. Paul Murray, my colleague at Sky News, says that in marginal seats, the Coalition is still in front and he has a good ear to the political ground but I still see this being a close run thing.

On the other hand, the polls say it’s neck and neck or Labor is in front on a two-party preferred basis. The 8 May Newspoll had Labor ahead 51-49, though Malcolm is the preferred PM — 49% plays 27% for Bill.

While debating the possible outcome with my TV guest, Martin Lakos from Macquarie, last night ahead of the show, I said ‘let’s go to the people who really do the form on the election — the online betting agencies!’

Sportsbet had Labor at $3.20, while the Coalition was $1.24, which in racing parlance makes Malcolm a shoe-in to dine with the US President next year at this stage of the race! And remember, the guys who work out these prices have money on the line, so you have to expect that they’ve done serious analysis on who greets the judge first on Election Day.

To the US and what’s the smart money saying?

A CNBC survey says “83% of CFOs expect a Clinton blowout.” That said, you have to ask how good a judge these number crunchers are. As CNBC points out, “when first polled on Trump as a GOP (Grand Old Party or Republican Party) nominee last September, the business tycoon failed to receive a single vote.” Around 78% thought Jeb Bush would be the winner! Jeb who?

This comes as Donald has been laying into the UK Prime Minister David Cameron on Good Morning Britain and he even gave it to the Mayor of London, Sadiq Khan, challenging him to an IQ test!

As Mark Macias of CNBC argues so eloquently: “In business, you get to be authoritarian. You can tell employees you don't care what they think, even though the most creative and best employees could walk away. But the United States is not an authoritarian state and the President is not an autocrat. Relationships do matter in Congress and abroad. What a President says has consequences.”

Can you imagine Donald and Bill talking about penalty rates and asylum seekers?

Sportsbet has Hillary at $1.36, while Donald is $3.25, so if the betting geniuses are right, it will be a ‘when Malcolm meets Hillary’ get together.

On 4 May, The Canadian Press pointed out what Donald Trump has against him right now. “Democrats have a built-in advantage. Of the six biggest states, four have gone Democrat for a quarter-century; one (Florida) is a swing state; and just one (Texas) is solidly Republican. Never mind the electoral-college math — just the popular-vote polls are nasty for Trump right now. Nine of every 10 polls show him losing, while other Republicans fare better against Clinton.”

I think Bill Shorten has a much better chance than the odds are currently showing and a chart Chris Gray from Property Empire showed on his Sky program last night could be crucial. He showed the property regions of Sydney and clearance rates at auctions over the weekend. All the Liberal-voting suburbs had clearance rates in the 70% region and were not far off their recent highs but out West and in more marginal seat territories, the clearance rates have slumped from 70-80% down to the 50% area.

This is not only bad for sellers out in these areas right now, it’s not good for what home owners out there think about the value of their homes. When people feel poorer they like to have someone to blame and the Government of the day is often the whipping boy.

Malcolm might be saying that Glenn Stevens, the Reserve Bank boss, is cutting interest rates right now and that should make all borrowers feel more wealthy.

My bet is Hillary will be dining next year with the Australian PM but with whom she sups is still an open question. As a punter, I’d go for Mal, but I wouldn’t be putting the house on it!