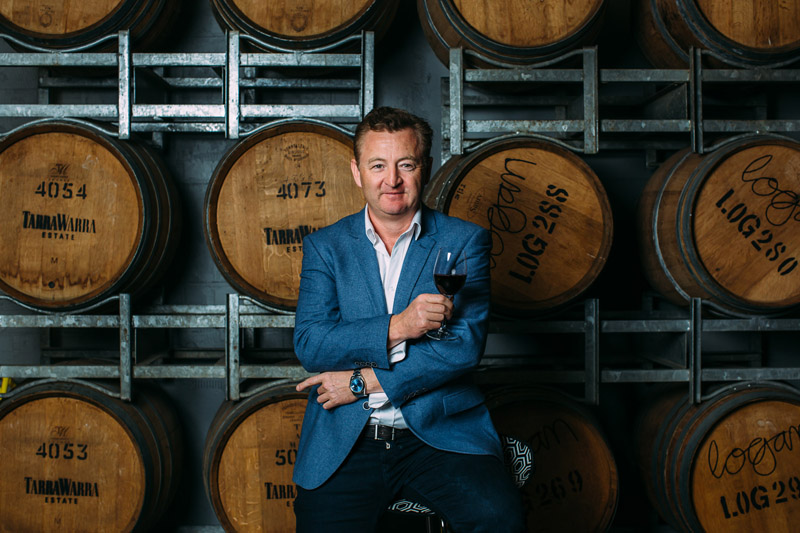 My investigative intrusions into Luke Mangan’s culinary and business building exploits go back well over a decade. I learnt of his unique brand as an up-and-coming chef (he hates the term “celebrity chef” though he’s often called it) when I was wined and dined by one of the top executives of the then ‘millionaires factory’, which was Macquarie Bank, pre-GFC!

I was impressed with Luke’s front of house manner, which was on par with Salt’s great food. He was then operating out of an uber cool building on the edge of Kings Cross but was still able to seduce business lunch types from the CBD, which underlined his evolving competitive advantage.

Much of this trip down memory lane was sparked when I posed the question I have never asked him before, which was: “How do you become a celebrity chef?”

Even though he explained how he was uncomfortable with the tag, he understood why he was called it and could see why I asked it, given the success of DIY cooking programs such as My Kitchen Rules and Master Chef. Our preoccupation with imagining we could be a celebrity chef seems to have no bounds nowadays.

“In my early days, on the way up, I would actually cook for celebrities and from that I’d get endorsements,” he recalled. “And when I cooked for the likes of Tom Cruise and Bill Clinton, what followed were interviews with TV programs such as Nine’s Today program and I was on my way to celebrity status.”

Luke says it becomes a momentum thing, with one public exposure opportunity leading to more media opportunities on TV and in the press, and then one day you wake up and you're a celebrity! 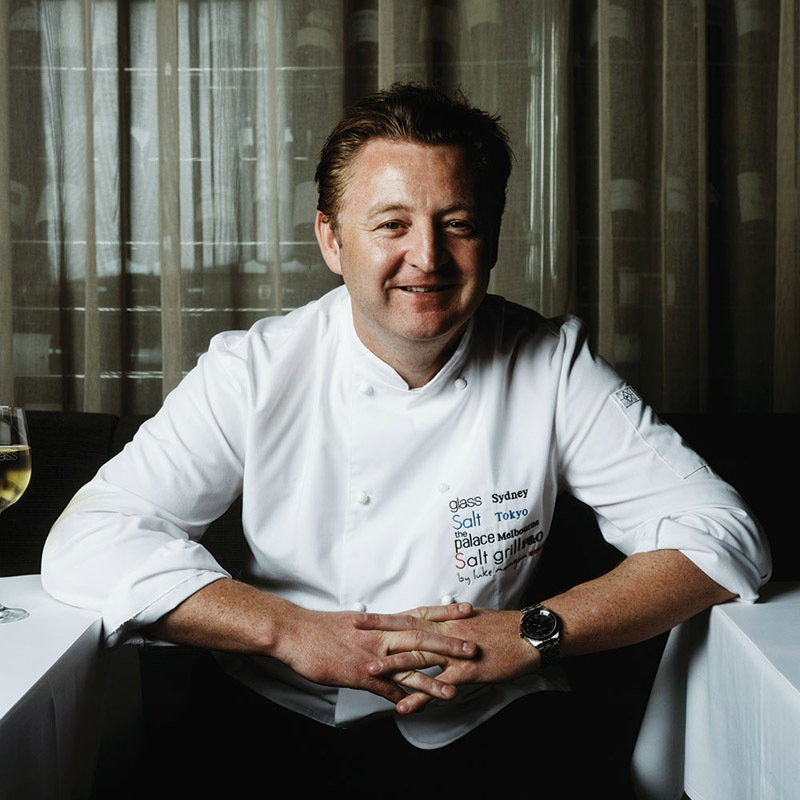 Luke’s lucky break was in 2002 when a group of four businessmen had enjoyed a lunch and had asked one of Luke’s staff if they could meet the chef/owner.

“They said their boss was coming out in two months’ time and they’d like to do a special dinner at Salt,” Luke said.

“I asked them who they worked for and when they said Virgin, I enquired if they were talking about Richard Branson.”

“After that dinner a little while later, I received a call from Sir Richard, who asked if he could book a table for Joan, his wife, and himself, which was a knockout.”

Luke has been associated with the Virgin brand since Sir Richard’s first Sydney visit to his restaurant, after which he was asked to do the Upper Class food for the Sydney-London leg of Branson’s then new Virgin Atlantic Australian service.

He then went on to set up business class catering for Virgin America and worked with Virgin Blue’s international arm, V Australia. 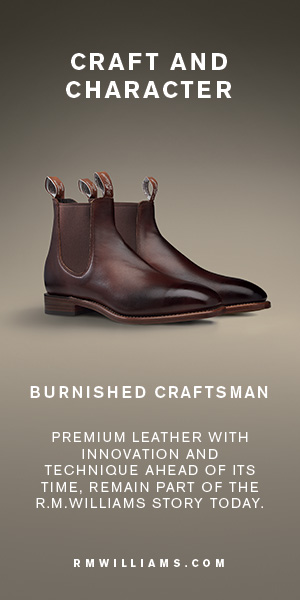 And the relationship has stood the test of time, with Luke now the chef for Virgin Australia’s food offering, which has been important for the airline’s CEO, John Borghetti, as he took on his arch-rival Qantas in the battle for business customers.

I asked Luke if this was seen as a plus for his ever-growing brand and his answer initially surprised me.

“I think putting your brand to an airline where you have a range of caterers is always risky,” he pointed out.

“However, I have known John Borghetti for a long time and I know him to be a stylish, classy man of substance so I had no doubt my brand would be safe.”

Luke comes from a family with seven boys and no girls and admits to being a schoolboy who, at 15 years of age, was encouraged by the headmaster not to persevere with school.

“When I told Dad the bad news about being asked to leave, I wanted to have an option to put before him,” Mangan said. “In fact, I tell my staff today not to come to me with only a problem but also come with a solution or another option.” So he started his cooking life with an elder brother, who worked at a then popular restaurant called Two Faces in Melbourne.

That was where the quality of his fare comes from but he has shown himself to be someone who could take the heat in the kitchen of business, as he has grown his one restaurant business into 19 around the world. His business now employs over 700 staff.

Did I say he not only can cook but can do business as well?

And it’s all run from his headquarters in Sydney, inside his Mojo Warehouse, which is the physical headquarters of lukemangan.com. 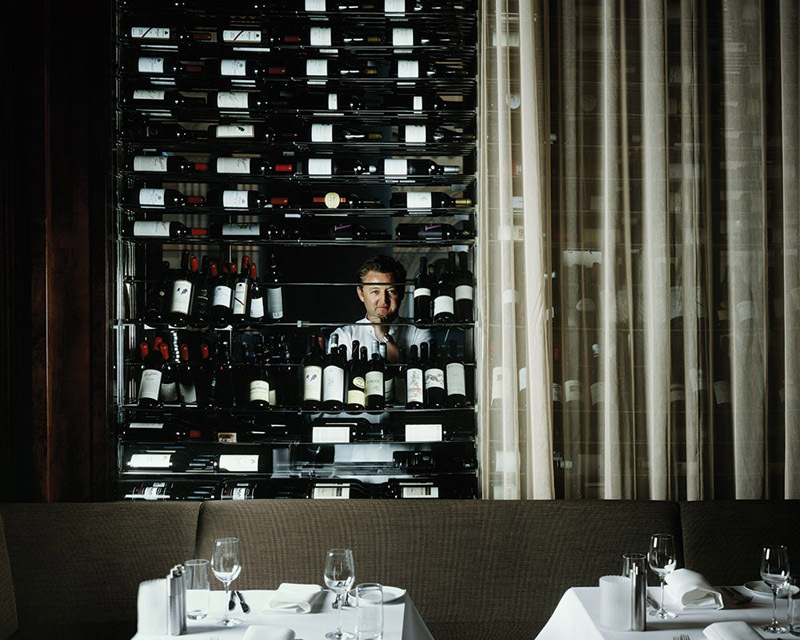 A part of his business success story was another good luck story that came from his belief in fine dining restaurants.

“I think fine dining really has its place and some iconic restaurants do it so well,” he told me nearly a decade ago and he added: “But at Salt we wanted to do it differently.”

This point of difference was the making of a lucky break when diners from the Port Japan Partners organisation, which was building up a stable of 20 or so marque restaurants worldwide, asked if he was interested in selling half of his brand to them.

“They said they had been to some of the best restaurants in Sydney, and that they had eaten at Salt and wanted to partner with me in Sydney and Tokyo,” he explained. “I was knocked out but I remembered the night they referred to and it was a great night at the restaurant.”

Since then, Salt has become the name of the Tokyo establishment, while in Sydney, Mangan’s flagship restaurant is Glass, which is ensconced in the Hilton Hotel.

Asked what the secret recipe has been for his business success, Luke points to his Japanese partner, which he hints strongly was a relationship built in culinary heaven. He also points to business mentors like Virgin’s local boss, John Borghetti, who has been a great sounding board for him. And he also stresses the benefits of diversification.

“Small business can be tough and having two restaurants is great but you never know when that rainy day might happen so having other streams of income is a great idea,” he advised.

That said, it’s not raining in one of the challenged economies of the world — Japan — where his Salt restaurant has celebrated its 10th birthday. And there are plans for two more restaurants in the Ginza soon.

“We’re opening a Salt Grill and a Salt Tapas Bar next year,” he said proudly. “So Tokyo has been a strong market for us but so has Singapore and Jakarta.”

Luke says last year was the best year yet and this coincides with the Oz economy growing at 3%, which was a lot higher than the pundits were predicting. He says it’s a little slower right now and suggests the election has a role to play.

“I’m seeing a bit of slowness in the business trade and I suspect it gets down to the corporates doing a little less entertaining, for God knows what reasons,” he confessed.

What about the future?

“We’ve just signed a deal with Eastern Oriental Trains, so we’re putting restaurants on trains now and it will go from Singapore to Bangkok,” he revealed.

It’s not quite the Steve Martin and John Candy movie but he is running his restaurant and food empire across trains, planes and cities and given his innovative entrepreneurial spirit, he may well have an offering for automobiles one day!

Anyone who underestimates Luke’s potential has ignored his history and anyone out there with a son or daughter, who might not be at one with their life at school, should get them to read this story because failure at school doesn’t mean you’ll be getting F’s for the rest of your life.

Luke Mangan has gone from F to High Distinction because he started doing something that he loved. And hasn’t it loved him back!

Luke on the Weekend

Read: The Weekend Australian – the physical copy and other online newspapers.

Sport: I go for a run or use the hotel gym because I’m often travelling. I used to play squash but my knees have let me down.

Getaway: I go to Melbourne to catch up with my Mum and family and maybe go to the vineyards.

Indulgence: Having some friends over or going to a friend’s place with some good food and good wine.