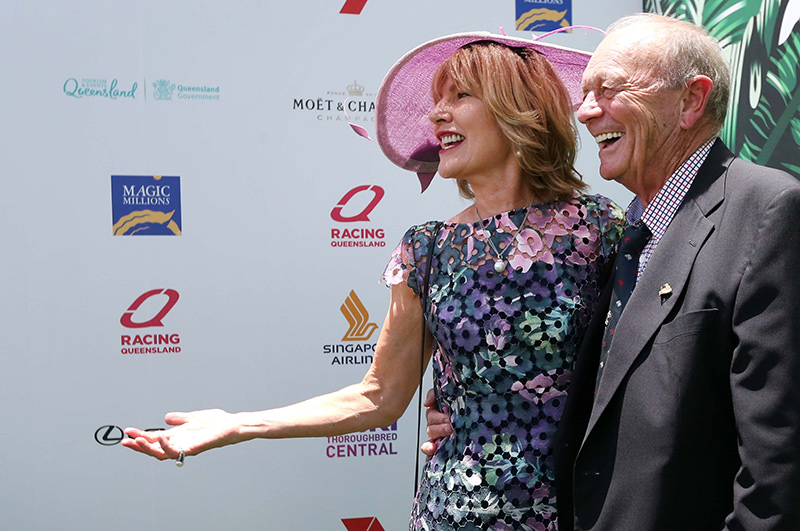 After writing this story and getting to the office this morning, I’ll take my video team out to the headquarters of Harvey Norman (HVN) to interview arguably Australia’s greatest retailer, Gerry Harvey. And the question I’m going to ask him is: “Who knows more about retailing and its future — him or retail analysts?”

Retail is his beat. He breathes it 24/7, though he can get distracted by his horse breeding/racing empire. Lucky for him, doing similar 24/7 retail inhaling is his wife and HVN managing director, Katie Page, who Gerry has described to me as, “just about the best retailer in the country!”

HVN is one of the most shorted stocks on the ASX, with 10.1% of its shares held by short sellers, who are betting that the company’s share price is going down. This number looks even more ominous when you take in what the AFR recently pointed out, that this 10.1% “represents about 20 per cent of the shares not held by Mr Harvey, Ms Page and the estate of co-founder Ian Norman.”

Short sellers think the threat of Amazon and the slowing housing sector threaten not only Gerry’s business but JB Hi-Fi, Wesfarmers (because it owns Bunnings) and Metcash (with its Mitre 10 holding). This chart shows the companies exposed, according to Citi, and HVN looks the most vulnerable revenue-wise, though Bunnings has a profit problem, based on the blue bar in the chart that shows EBIT, which is earnings before interest and tax. 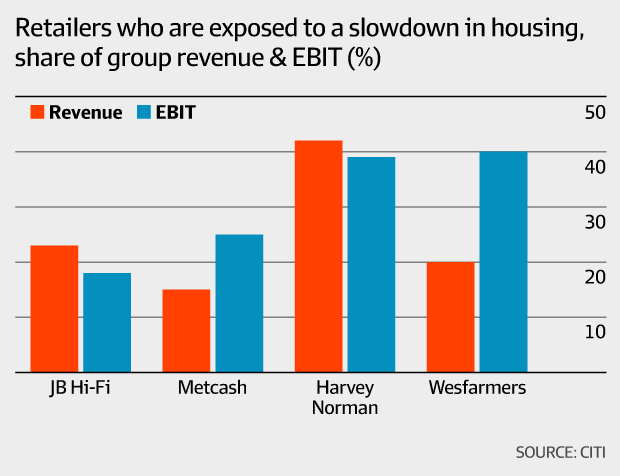 In his typical Gerry style, Gerry has dismissed the Citi analysts’ report, arguing that population growth and technological improvement is more important than softer house prices. Predictably, he thinks talk of house price Armageddon is exaggerated (as do I) so he argues the ‘shorters’ have got it wrong, though they probably have made money since August 2016 when the share price was $5.38 and is now $3.60. 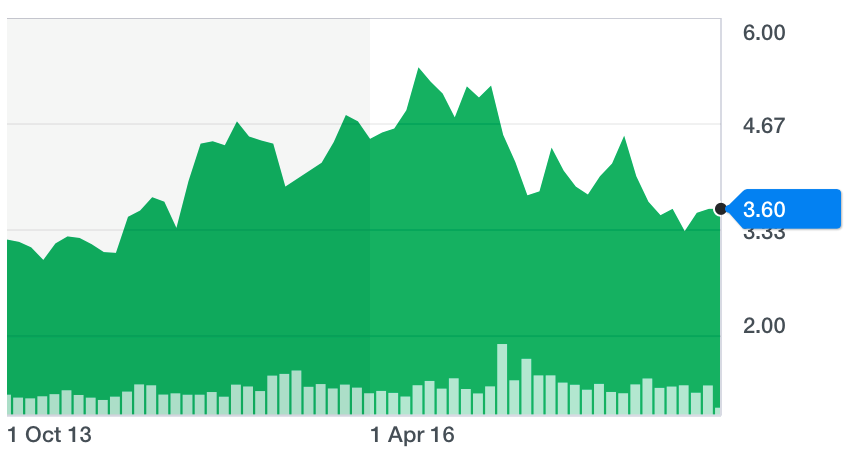 Critics of Gerry and HVN’s future have claimed he has franchising issues, an accounting irregularity and his online strategy is inadequate to compete with the likes of Amazon and even local players, such as Kogan.com.au. This really annoys Gerry, who argues that he has invested in online and it’s one of the best in the country but percentage-wise people still want to go into stores.

On Friday, HVN did their latest company profit show-and-tell to the market and while Gerry says he was “pleased with the results”, its share price fell 5%. Now the reason for the fall wasn’t a bad performance but was linked to an announcement that the company wants to raise $164 million to reduce debt and bankroll an expansion of HVN overseas.

Some were expecting a special dividend from the company, which could explain why the share price fell on the disappointment. However part of the price fall would be that the $164 million would be raised via something called a 1-for-17 renounceable rights issue. If a shareholder takes this up, they will pay $2.50 a share, which would be a 34% discount to Thursday's $3.77 close, which was the share price before the announcement on Friday.

Stay with me on this.

Now companies in a bit of trouble can use a rights issue but so can a company setting its sails for expansion as well as debt reduction. And that’s what Gerry says he’s doing.

Delving into Friday’s numbers, the actual business neither grew nor fell and was described as being ‘flat’, which isn’t bad with all this house price problem talk in newspapers and the media almost daily.

This is how the AFR described it: “Bottom line net profit fell 16 per cent to $375.4 million, reflecting big losses on Harvey Norman's half-stake in a Victorian dairy farm, Coomboona Holdings, and weaker earnings from Australian franchisees, who have been discounting heavily to defend their turf against Amazon, JB Hi-Fi and The Good Guys and to take market share from smaller retailers such as Bing Lee.”

Dairy disaster aside (which was clearly a Gerry idea for diversification that hasn’t worked out and costing about 10% on the overall profit figure), the important bit of the business is doing OK, considering it’s into a battle with Amazon and other retailers. In typical Gerry fashion, this was his take on the profit story on Friday: “All in all, the 2018 financial year has been a strong one, particularly on the back of the previous record-breaking 2017 financial year result.”

The good part of the Gerry story, which was not over-reported, is what the company does with the $164 million. Debt reduction gets a tick but the biggest one is for the plans to expand HVN overseas. The offshore expansion story really looks like the bright spot, as the following shows:

• Ireland made its first profit in this report.

• Nine new stores will open in Malaysia this year, which means there will be 25 there.

• The company has a goal to open 18 new stores overseas.

Interestingly, Citi analyst, Bryan Raymond, told the AFR that “the overall result was in line with expectations but the outlook for Australia remained tough due to the slowing housing cycle and elevated competition.”

So Gerry’s move overseas is his trump card and while it makes his company more risky (assuming overseas is more risky than doing business here), it also gives the business upside potential. And I guess no one understands the old cliché “no guts not glory” better than Gerry.

By the way, HVN increased its final dividend from 12 cents to 18 cents for a total annual dividend of 30 cents. So if you bought a share today at $3.60 and the dividend is maintained, your yield would be 8.3%, before franking credits take you to a 10% plus return. But then Gerry and Katie have to make sure that their battles with Amazon, JB Hi-Fi and the overseas expansion don’t hurt the share price because that would reduce your 10% gain.

One final point, and this is where Gerry takes on the expert analysts, who see the local battle with Amazon and a housing challenge as hurdles for HVN.

On Amazon, he thinks he can compete effectively with them, though he knows in big cities they will eventually be a challenge. He says he can kill them outside those areas. And on the Citi guys warning that the housing slowdown will hit HVN and other retailers’ share prices, the man of experience said this:

“When the housing prices do go down a bit – and I don't know how much they are going to go down, my view is it will be very minimal – the population is still increasing at the moment by 300,000 a year. I'd much rather that than property prices go up and there's no extra people.” (AFR)

Gerry is backing people over property prices. If you want to invest in HVN, you’ll be backing people as well — Gerry and Katie and the team they lead here and abroad. And at current share prices, if you’re a bit of a punter, they might be worth a bet — but it’s no sure thing.