Telstraâ€™s share price surge teaches you a lesson you should never ignore, if you want to be rich.

In case you missed it, Telstra’s share price has gone from $2.62 to $3.27 since June 20, and that’s a rise of 24%. Its biggest one-day spike inside this surge was on Wednesday, with a 7.21% jump. That’s not bad for a company that on August 15 announced an 8.9% fall in full-year profit because of shrinking margins.

Recently, the company’s CEO, Andy Penn, has told us that he was changing the company and investing for the long run to make the business better in a more competitive world.

What happened to Telstra is an important lesson for anyone wanting to build wealth through shares. I’ve often told my subscribers to the Switzer Report, our investment and stock-picking newsletter, that quality companies that are beaten up by an overreacting stock market can be an opportunity to buy what looks like the wrong stock at the right time.

By the way, don’t think all Telstra shareholders are drinking champagne this morning, as the chart below shows you how the company’s share price has performed over the past year. 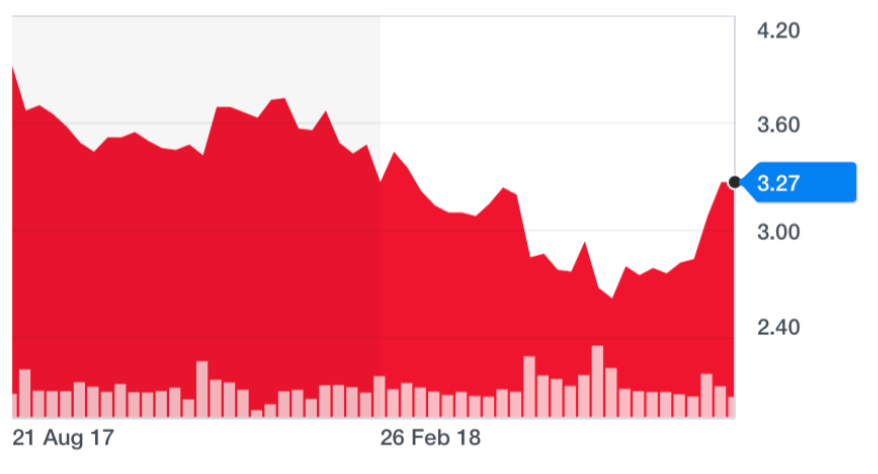 Yep, the slide from $3.92 a year ago to $2.62 really hurt those who bought the stock for its hefty dividend, which over the year has been cut, with hints that more cuts could be coming. To be fair on the CEO, a lot of smarties liked his long run plan to improve the company and only two days ago we learnt that Goldman Sachs tipped its stock would be at $3.60.

Recently, I wrote and talked about Telstra in my newsletter and on my TV show — Money Talks on Sky News Business, with one of my ‘go to’ guys for stock analysis, Roger Montgomery, who’d hated Telstra for at least a decade. However, he fell in love with the stock recently when the price fell to below what he thought was its intrinsic value. Roger also liked the long-run turnaround plan outlined by Andy Penn and, therefore, had become a buyer.

Another ‘go to’ guy I chat with when I’m searching for good companies to invest in is Geoff Wilson. A few months back I asked 10 experts for one stock that they’d invest in for 10 years and Geoff surprised me when he nominated TPG!

This is a smaller telco with big plans to build its own mobile network. This is what they’ve been telling the market: “TPG wants to be Australia's big new mobile telco, and it's offering free unlimited data to convince you.” It’s a company like this that has made life hard for Telstra and explains why its share price has come under pressure.

But that could be about to change, if the ACCC permits a proposed merger of TPG with Vodafone, which could mean an end to the mobile price war, which has been great for consumers but terrible for telco profits and shareholders’ share prices!

Coincidentally, on Tuesday night on The Final Count television programme, I brought up the Wilson TPG call and even mentioned that it could be a takeover target. And low and behold, merger talk bobbed up on Wednesday.

Of course, that was lucky timing but the whole Telstra and TPG talk came about because people like me, and the people I talk to, are always looking for quality assets that are simply mispriced. Now the experts don’t always get it right because company circumstances, government policy and changes in the competitive landscape can create surprises, but the idea of searching for quality assets (be it in shares, property, art or whatever) when the market is too negative, is an investment strategy that will help you build wealth.

You could have bought CBA at $27 in 2008 because of the GFC. And Macquarie, which is now $124.30 was $16.90 in 2008 before Treasurer Wayne Swan rescued them by telling the world that the Government would stand behind our banks, as all Aussie Treasurers would.

This strategy of buying quality at good prices across lots of assets (I like 15-20 stocks in my portfolio) is an important lesson that this Telstra/TPG story tells us this morning.

And if you can’t pick quality assets, then seek help. As I always advise: “Anything worth doing is worth doing for money!”