What would you tell your kids if they asked how they could get rich?

Recently, The Guardian newspaper revealed that “The economy of Australia is one of the largest mixed-market economies in the world, with a GDP of A$1.69 trillion as of 2017. Australia is the second-wealthiest nation in terms of wealth per adult, after Switzerland. Australia's total wealth was A$8.9 trillion as of June 2016.”

And in case you’re curious, a Credit Suisse report, “shows the level of wealth held by Australia’s richest 1% grew to 23% in 2017, up from 22% the year before, with the top 1% owning more wealth than the bottom 70% of Australians combined.”

So what would you say to your son or daughter, nephew/niece or even your granddaughter or grandson if they asked you how could they get rich? It’s not a question enough young people ask. I guess a part of the reason is that most young people don’t know enough older people who can actually answer the question.

By the way, this might be a question you should be asking yourself, especially if you know you could not offer anything reliable to answer this critically important hip-pocket question.

Given my background, I thought I’d lend a hand and give my ‘two pence’ worth on the subject. I put ‘two pence’ in inverted commas because what I’m going to tell you is worth more than a couple of pennies!

To make this engaging, I’m going to use the Socratic method of asking questions, which I like to compare to the great investigative work of the TV cop, Lieutenant Columbo.

The first question I reckon you should be asking and answering is: “What does rich look like?”

The answer could be to own a house, have a million in superannuation on top of an investment property and a great income each year. So let’s take this as a base line goal and think about how someone gets to that?

Nailing a million in super is going to be easy provided a young person can aspire to a decent job. Government is committed to 12% of our pay going into compulsory super by 2025. That will pretty well guarantee that most young people in a good job will have a million dollar plus nest egg in super.
That said, you have tell them to make sure they’re in a good super fund with a history of solid returns and relatively low costs. This table shows the better funds to compare to or to get into. 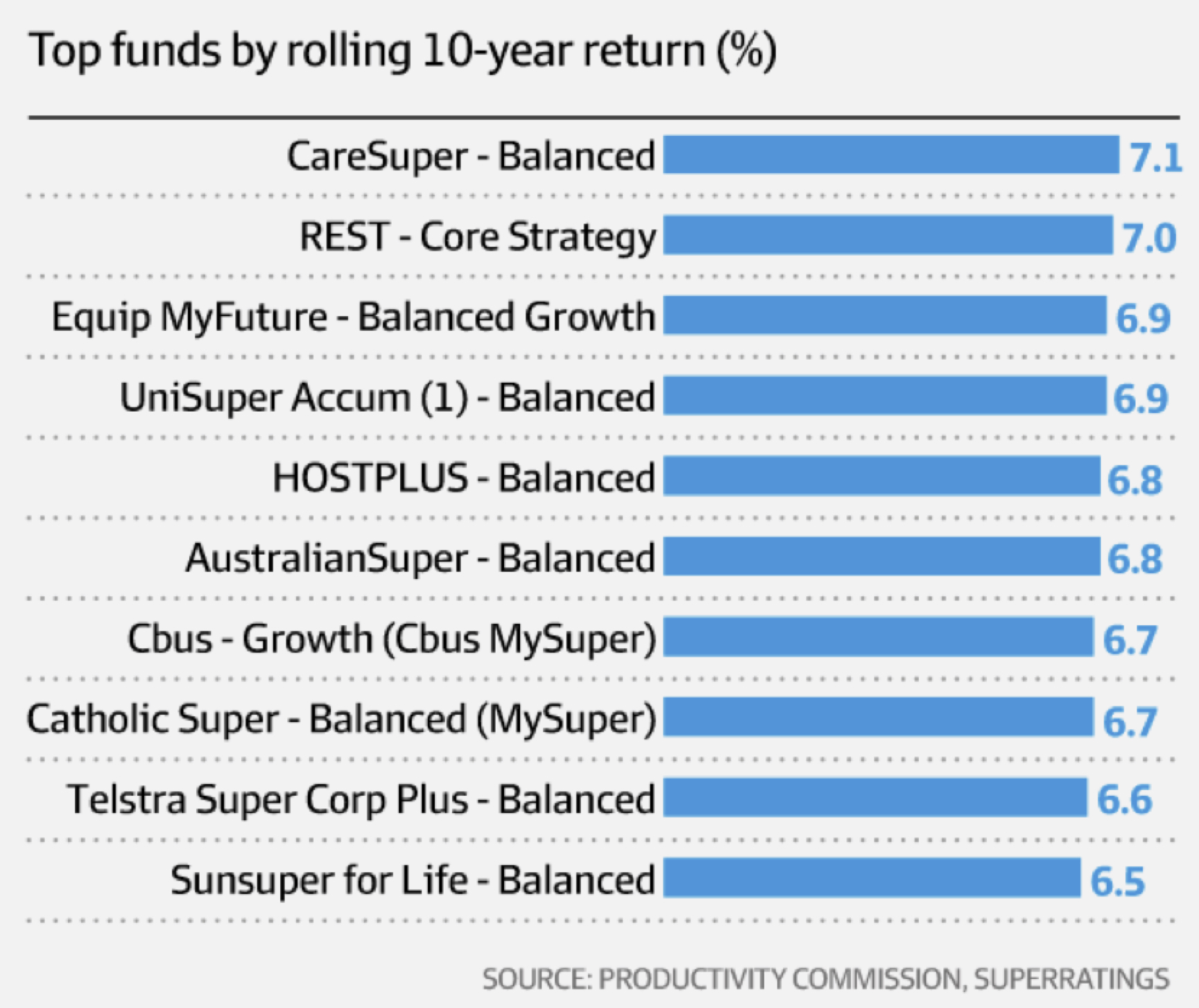 This requires a few things to happen. First, you need a deposit, so you have to save. There are plenty of ways to skin this cat but writing down a targeted savings goal per year is a smart start.

You also could look at a second job on the weekend, purely to make your targeted savings goal. You could also start a part-time business, which the Yanks call a side-hustle, such as a stall at weekend markets, finding stuff in Op shops and selling it on eBay or gumtree.com.au.

Some smarties who want to get rich play a poorer person’s game by buying second hand, going to Op shops and making sure that they don’t waste money.

They are driven by their goals, such as buying that home.

Second, once you have the savings coming in, you then need to invest it to grow it into a decent deposit. Let’s imagine you can save $10,000 a year and you need $100,000 for a deposit for an apartment. How do you grow your savings into that amount ASAP?

Term deposits won’t do it at 3% interest rates. There is a new super/deposit option from the Federal Government called The First Home Super Saver Scheme (FHSSS), which means you can apply to have a maximum of $15,000 of your voluntary contributions from any one financial year, included in your eligible contributions to be released under the FHSS scheme, up to a total of $30,000 contributions across all years.

You will also receive an amount of earnings that relate to those contributions.

Having a life partner/spouse could mean you’d get to $60,000 pretty quickly, if you slammed your $10,000 worth of savings into your super fund. If you both could get $15,000 together, it would take only two years!

If you want to grow your money outside of super, then you’d have to opt for stocks. I love this chart to show people how you can get rich via stocks.

But not all stocks give this return. But if someone invested in iShares Core S&P/ASX 200 ETF  (IOZ) or SPDR® S&P®/ASX 200 Fund (STW), you’d get the top 200 stocks plus dividends, and history says this returns 10% per annum over a 10-year period. Now note there can be bad years, where a market falls 50%. But, over time, the good years cancel out the bad.

(IOZ is an exchange traded product that you can buy on the stock market like a stock and you get our top 200 stocks in one plus a collective dividend of between 4-5% a year. STW is a similar product.)

Given the stock market is now getting long in the tooth, I’d advise a young person to build up their savings elsewhere and wait for the next market crash, which could happen over the next two years, and then go hard on stocks to ride up the market comeback.

The risk-taker could gamble on one or two years before a crash but you have to remember it’s a punt in the short term. Stocks are reliable in the long-term and can be scary in the short term. Even the legendary investor Warren Buffett has confessed: “I don't know when to buy stocks, but I know whether to buy stocks.” He has also advised us: “If you aren't willing to own a stock for ten years, don't even think about owning it...”

Third, once you have your savings plan and your money-growing plan right, don’t be a tightwad and pay for help. If you’re paying a lot of tax, see if it’s in your best interest to maybe borrow to buy an investment property rather than shooting for a house to live in.

The wordsmiths call it “rentvesting”, where you rent where you want to live and buy where you can afford. This can be a good way to bring down your tax bill, gain an investment property in an affordable area while you live where you really want to be but where it might be too pricey.

A big lesson for would-be wealth-builders is that interest on an investment property is tax deductible. I should throw in that if Labor wins the next election, they mean to only allow it on newly-built properties.  This would affect the future resale value of any investment property.

Another expert ‘recruit’ to help you get rich could be a trustworthy financial planner who puts themselves into your shoes, helps you identify your goals, assesses your current wealth-generating strategy and then makes recommendations to boost the pace of your rise to riches.

Of course, if you don’t want to play ball with an adviser, you could learn to advise yourself and there are a whole host of websites, like www.switzer.com.au, books, magazines and videos that are designed to help anyone get money smarter and, ultimately, richer in the process.

But as the old saying goes, you can lead a horse to water but you can’t make them drink.

Finally, the best encouragement you can give a would-be rich-lister is to ask them how badly do they want to build their wealth? They have to be committed or they will end up like most people, where getting rich is a hit or miss affair.

Some people work really hard, study diligently and get promoted. But experience tells me that there are a lot of smart people in universities and big companies who are just doing OK for themselves, money-wise.

The ones that become CEOs, brilliant business builders, highly paid executives, celebrity media personalities, sports stars or greats of the arts, think outside the square, go the extra mile and surround themselves with great people, who show them how to win and succeed. They do all that with exceptional focus on making their dreams come true.

Getting rich is a process driven by desire. Once you’ve got that nailed, you need to write down your plan and visit it regularly to make sure you are committing to it and you are making it better.

Nabi Saleh, the founder of Gloria Jeans in Australia, who started with two franchises and a partner and who then owned the worldwide brand and sold it for a $163 million, told me many years ago that he always had big goals. He argued if that even if he didn’t quite achieve those huge goals, he still was bound to be in a really good place. And by the way, Nabi did hit those huge goals, with over 1000 outlets in just 40 countries and even bought out the USA business!

Here are a couple of quotes to think about that just might help you get rich: