I really want the rally to be extended and better investment as well as growth will be the best ways to ensure it all happens.

What I want for Christmas looks mad but it's the gift that keeps giving!

I’m hoping for one thing for Christmas, well, maybe two things. To a normal person they might look pretty weird but there’s method in my madness.

The first thing I want to do is to say a really big sorry to the Reserve Bank Governor, Glenn Stevens for roasting him for not cutting interest rates on Cup Day. That said, my roasting was not as aggressive as it was when he and his board kept interest rate too high for too long a few years back. This chart shows the mistake and how the Bank made up by eventually cutting the cash rate down to 2%. 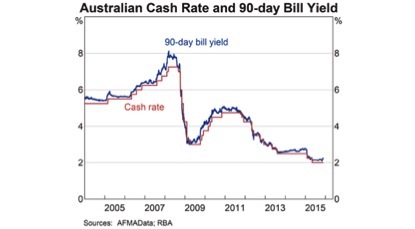 The great 0.9% economic growth result for the September quarter was a nice start and this week I have publicly hailed the RBA’s call on growth a few weeks back. So I say: “Way to go, Glenn.”

However, the doubters are downgrading the good by saying it was driven by exports, which means the domestic economy is weak. It’s funny when the mining boom was on, no one seemed to care that the high dollar was killing retail, tourism, education and manufacturing businesses.

But now it’s all negative stuff when we should be cheering that growth has gone from 0.3% in the June quarter to 0.9% in the September quarter.

I reckon this is the turning point for the economy. I suspect the RBA does too or else they’re a team of idiots keeping their fingers crossed that the economic outlook ‘might’  improve. If they were as negative as some of the ‘expert’ economics commentators and economists, who are worrying about our future, then they’d have to cut rates to go for more stimulation. It would be criminally reckless to think our economy was going backwards and not do anything about it.

So, I’m sweating on the December quarter growth number, which we don’t get until March 2, so Glenn might have to wait for my Christmas well wishes until then!

My second gift is that I want to see businesses embrace the recovery and start to get more confident and begin a process of increasing capital spending on machines, equipment and all the things that go with a solid economic recovery. The ‘experts’, who’ve worried about economic growth going forward, have pointed to the poor business investment figures but they’re September quarter numbers, which started in July. It’s now December, so a lot could have changed since then.

Both business and consumer confidence has turned positive, we have a new PM, growth has spiked, unemployment has fallen from 6.2% to 5.9% and the job market is looking tighter and brighter. Also, the slow process of the lower dollar helping the economy is starting to work, so there’s good reason to hope that business could be more positive and willing to invest than it was in July to September.

We don’t see the December number until February 25 so I’ll be hanging out for that stat too.

I know better growth and investment figures are weird things to wish for Christmas but if these deliver, earnings expectations will rise and so will share prices, which could be the gift that keeps giving for a couple years or so.

While I’m expecting and sweating on a Santa Claus rally between now and New Year, I really want the rally to be extended and better investment as well as growth will be the best ways to ensure it all happens.

Watch this space as you know I’ll be monitoring it all.