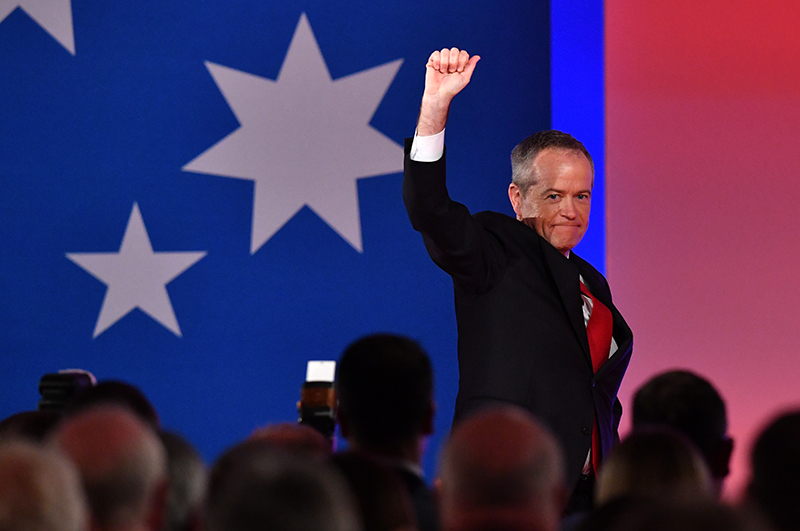 The man calling a 40% fall in house prices ahead for Australia, Professor Steve Keen, thinks it was a good election to lose and he advised such before Saturday’s poll. I think he’s wrong, though I do expect we’ll see a recession worldwide over the next three years purely created by external factors.

And if I was to finger anybody for the crime of triggering a recession, I’d be pointing the finger at one Donald J. Trump. I wrote this opening last night and woke up this morning to the news that Donald and China’s stubbornness is such that Wall Street is now contemplating that this trade war could go on longer than expected. It’s made a 10% correction for stocks (and a global economic slowdown) a real chance and explains why the Dow ended down 286 points — but it was down over 400 points earlier!

How Australia beat having a recession for 28 years says something special about our economy, and us. But I know we can’t always resist those winds of change that blow in a serious economic downturn.

Our last recession in 1990-91 was a consequence of the growth that came out of deregulation here and worldwide that meant lending got out of control and I have to admit that’s where Steve Keen has a strong argument. But where his predictions are based on anecdotal evidence and hunches is the severity of the house price fall and the depth of the recession.

I interviewed the great Canadian economist (but US-based and White House employed) John K. Galbraith during the 1987 stock market crash. I always remember how he put our work into context when I asked him: “What do you think will happen, given the severity of that crash?”

Back in October 1987, when my commentary exploded out of the lecture halls at the University of NSW (where our current PM was one of my students) and in my weekly columns in The Daily Telegraph, not to mention talking to the super big audiences Doug Mulray and The Degeneration attracted (when I worked on Triple M in Sydney and Melbourne), huge debt levels over the decade of deregulation sowed the seeds of “the recession we had to have.”

Those debts created the ‘here today, gone tomorrow’ business ‘billionaires’ like Alan Bond, Christopher Skase and Robert Holmes a Court and culminated in 17% home loan interest rates that led to the mother of all recessions for us, where unemployment topped 10%.

Then, one contributing mistake was interest rate policy that remains Paul Keating’s greatest economic screw up. In those days, the Treasurer had big sway over the RBA boss and Paul had told us all that he had the Governor “in my hip pocket”. He deserves to be praised for most things he did but his rates policy stunk!

Back to today, and like the Reserve Bank Governor, Dr Phil Lowe, who gave the greatest tip about a looming rate cut I’ve ever seen from a central bank boss locally, I think our house price fall “will be manageable”. Steve doesn’t. Professor Warren Hogan of UTS and the former chief economist at ANZ, thinks it is. And so does Dr Shane Oliver of AMP Capital, who this week says he sees a bottoming of house prices in train.

While Steve reckons this was a good election for Labor to lose because it will dodge his expected recession, I’d argue that Labor was more likely to sow the seeds, throw on the manure and flood us with water to ensure a serious recession ‘crop’ would be a certainty!

Now this isn’t me being anti-Labor. This is me being an economist! We have a slowing economy created by a slowing China, a world economy shocked and trumped by Mr T, who’s running the US in an unusual way, a local economy struggling restrictive bank lending since the APRA crackdown and the Royal Commission, which made worse the natural slowing of house prices after five years of runaway real estate mania.

Throw in an election, which always hurts the economy temporarily, and then there was Bill with his ‘treat ‘em mean and they’ll be keen’ suite of tough love policies, and it’s no wonder that business and consumer confidence sunk like a stone. And it explains why economic growth fell from around 3% plus in the last financial year to 2.3% in the past 12 months. And it would have gone lower with a PM Bill Shorten at the helm, unless he welched on his pre-election promises.

Changes to negative gearing and the capital gains tax discount would have scared off investors just when we need them. Spooking small business owners with a promise of higher wages is hardly well-timed, when consumers are feeling the pinch and not showing up to shop or buy services. That policy could have KO’d the one bright spot for the economy — the job market — where there have been record jobs created and the participation rate is at an all-time high!

And it was hardly a great idea to tell self-funded retirees, who are pretty good spenders on cars, caravans, holidays and their families (as they often play the bank of mum and dad), that they’d lose their tax refunds linked to franking credits.

It’s an irony but Bill was the biggest crusader for the Royal Commission (RC) into banks and others behaving badly and while there’s a social and a personal compensation dividend from his efforts, it has hurt demand and economic growth, which creates jobs, via the kind of bank we have today because of the RC that makes borrowers jump through silly hoops to get a loan.

Bill and his Royal Commission could be a recession creator, which gives me mixed feelings towards Justice Hayne. But hell, I guess he’s only a lawyer doing his job! And anyway, the bad behaviour of banks had been ignored by too many government ministers over decades and Bill was one of them, when he was Minister for Super!

My conclusion is a reworking of Steve’s view. Rather than this was an election that it was best for Bill to lose, it was one where we’re lucky the Coalition has prevailed. Scomo will be more supportive of borrowers to help house prices stabilize. He’ll back small business employers, retirees and investors. And given the weakness, such that the RBA boss is about to cut rates, I don't think, timing-wise, we needed the tough PM that Bill promised to be.