Want to be rich? Learn principles from a hedge fund manager!

Here’s a good question for the start of the year: what can you learn from the man who was so broke in the 1980s he had to borrow $4,000 from his Dad to make ends meet, but today is one of the top 100 richest people in the world? Well, he says he can teach us the value of, wait for it — principles!

Ray Dalio is not the kind of person you’d expect to be talking about the importance of principles being a hedge fund manager, and being the founder of one of the best of this, often despised, breed of investing bodies.

Hedge fund managers often take positions against the majority of investors who want the stock market to rise forever. Of course, betting against this pipedream of always rising stock prices is understandable for smart players, and it’s even rational, but some hedge fund managers place bets against the market and then try to manipulate the media to make their bets pay off.

And their collective action can sometimes over-influence markets but, in reality, they do serve an OK function when they play ball honestly as markets are always efficient when there are buyers and sellers competing in a healthy way.

That’s enough on this debatable subject, let’s get back to Ray Dalio of Bridgewater Associates out of Westport Connecticut in the US, who penned the book: Principles.

Dalio is a legend of investment and while he has had some big, no, huge losses along the way of becoming arguably the smartest guy in the room, his success is measured by the fact that his company is ranked as the 5th most important private company in the USA, according to Fortune.com. Meanwhile, Forbes.com puts him in the top 100 richest people in the States!

Not surprisingly, Time.com named him in the 100 most influential people in the USA list.

Does he need any more PR to explain his significance? I don’t think so.

And he’s obviously got something to say about principles when you find out that Microsoft legend, Bill Gates, said of his book: “Ray Dalio has provided me with invaluable guidance and insights…”. But others, like the world’s super life coach, Tony Robbins have rated his book among some of the best going.

“I found it to be truly extraordinary,” he revealed. “Every page is full of so many principles of distinction and insights…”.

This is high praise and it’s not often that I dedicate my Weekend Switzer piece to a book but when it’s significant to me, I just have to share it with you.

I think many see principles as something that belong to the high moral order that we either aspire to or feel bad about when we know we are not doing ourselves proud. C’mon, we’re all guilty of that.

Interestingly, Dalio defines principles as “fundamental truths that serve as the foundations for behaviour that gets you what you want out of life.”

He thinks once you know what they are for you, you then can apply them “again and again in similar situations to help you achieve your goals.”

Our principles help us deal with the many situations we face each day. For example, having high principles about food means when someone offers you junk food, you say no. When someone invites you to break the law, you say no (or I expect you do!).

It’s so fundamental, isn’t it, but I know I’ve never analysed what I do and how what I do is linked to my principles. And the more I think about it now, following reading the book, the more I know I need to be clear on what my principles are.

According to Dalio, and I think he’s right, “to be principled means to consistently operate with principles that can be clearly explained.” That said, I think the more usual notion on being principled implies having good principles as opposed to bad ones that you consistently adhere to.

But let’s not debate this and concentrate on the lesson that all of us need to know - what are the principles that will not only deliver a quality life but also success, however you define it.

Dalio says he’d love to know what principles powered the likes of Leonardo da Vinci, Steve Jobs and Albert Einstein but, given my position in the money world, I wanted to know Ray’s.

Much of what I write about, talk about and think about is around what successful people can teach us. I’m always looking to add to my imaginary board of mentors, which is something I learnt from one of my imaginary mentors — Jim Collins, the author of that insightful book, Good to Great.

Jim actually did this as a young man, using the books he read to imagine what great business thinkers would say to him if he actually could ask them his vital success questions.

We collect our principles from a range of influences and are aware of that old saying “be careful of the company you keep.” But I prefer this from the philosopher Epictetus who advised: “The key is to keep company only with people who uplift you, whose presence calls forth your best.”

So, what are Ray’s rules for principles collecting?

Be clear on your principles as they will affect all aspects of your life. He says he learnt a lot of his principles over a “lifetime of making mistakes and spending a lot of time reflecting on them.”

And this became the basis of his high achievements.

“I believe that the key to success lies in knowing how to both strive for a lot and failing well,” he admits.

He says taking away great lessons from “painful failures” builds up an arsenal of principles that makes you a formidable force.

I took a rough photo of a chart where he shows how he used audacious goals, combined with failures, to lift his principles and his success rate, taking his achievements to a higher level time after time.

This is kind of chart you should share with the people you lead, from your children to your staff to yourself! 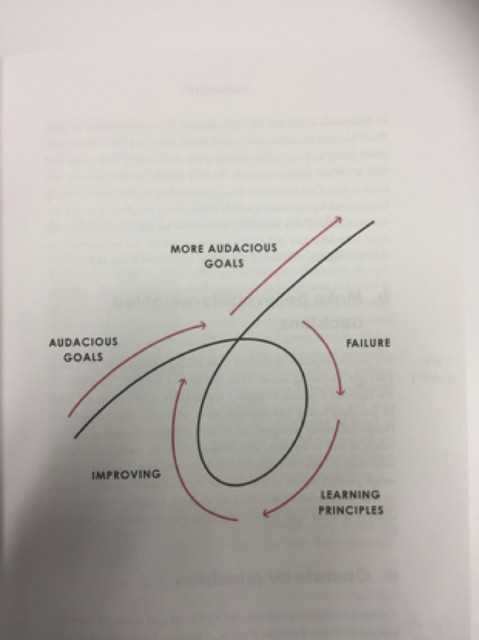 Helping him wind up with the best possible principles was something he labeled “believability weighted decisions”. His early life of painful mistakes forced him to be someone who asked “How do I know I’m right?” rather than “I know I’m right!”

Once you’ve followed Dalio’s advice so far, you would then take his advice to write down the criteria you use to make a decision.

“Experiences taught me how invaluable it is to write down my decision-making criteria whenever I made a decision, so I got in the habit doing that,” he explained.

The final piece in Dalio’s constructed jigsaw puzzle showing the principles of his success is his insistence that you have to systemise your decision process. And this is where he forced me to find the best definition of what an algorithm was.

As the age of the computer came to the world of money, Dalio put his steps or rules for decision making into an algorithm that could he put into a computer. This meant his conclusions from his decision-making criteria could be compared to what a computer would conclude on, say, a subject such as: Will the price of gold rise or fall?

An algorithm is a fancy computer age term for a formula, a step-by-step guide. Even a recipe for a cake is basically an algorithm.

Dalio said he learnt that “the computer could make better decisions than me because it could process vastly more information than I could, and it could do it faster and unemotionally.”

He believes Bridgewater’s success in making money for their clients, and Ray as well as his co-workers, is based on their principle-driven approach to decision making, all wrapped up in a reliable system. But you don’t have to be an over-systemized computer freak to benefit from his advice.

This is what he says is at the core of his success, so I suggest you get writing ASAP, and that’s exactly what my team and I will be doing.