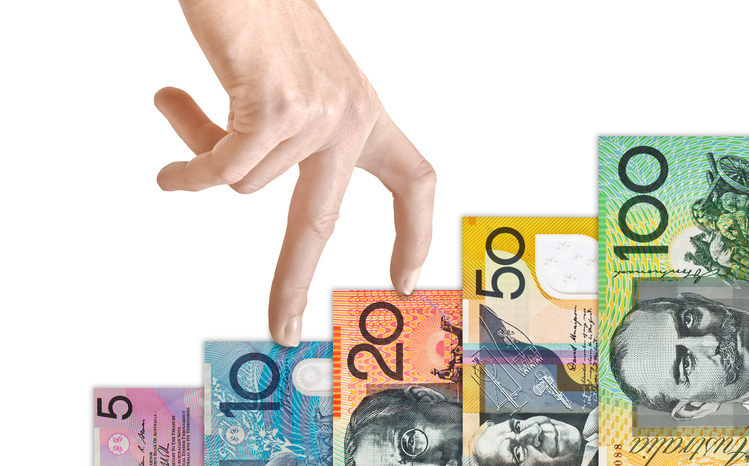 Wages are rising too slowly but will it ever change?

Wages in Australia simply aren’t rising quickly enough and some economists are very negative on our prospects as a consequence. However, they might be victims of their old-world thinking. Frankly, for the sake of the economy as well as my optimism, I hope I’m right.

Peter Martin at the SMH today talks about how a certain graph on wages shows why the Reserve Bank boss, Dr. Phil Lowe, might be in a pickle.

You see, in the past, if wages growth was slow, it hurt the Budget because taxes on wages grew too slowly so it was a reflection of a slow economy, which needed interest rate cuts.

However, the RBA doesn’t want to cut rates more, as it would only fuel housing markets in Sydney and Melbourne.

Let me show you this graphically: 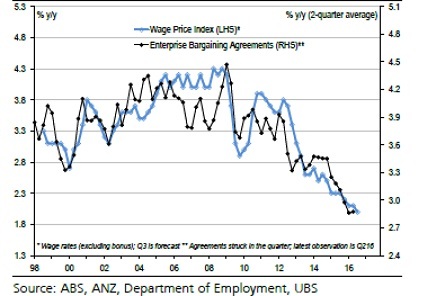 The blue line is the important one and it shows pre-GFC wages were rising normally but the trend has been down. Note there was a kick up in wages growth between 2010-13 and that probably tells you something about the cure for weak pay growth. That was when Labor was in power and they were building school halls and throwing money at the threat of a GFC recession, which we avoided. Also, the mining boom was still on but as it lost steam, wages started to decline. If you’ve been asking for a wage rise in WA, NT or Queensland, you had to be in a great business or sector that was defying the overall slow economies in those parts of Australia, post-GFC and post-mining’s slide.

In the past, this development would be really worrying as it was a sure sign that things were getting worse in the economy but maybe this is a sign of the new world we live in.

Wages are being forced down because of intense competition from foreign businesses that have invaded our shores — Aldi, Airbnb, Uber, etc. — and online where the relative price differences are taking customers away from traditional stores that pay us wages.

These developments haven’t been great in creating willing employers happy to bump up wages, as was often the case pre-GFC.

Of course, wage rises are not uniform so if you’re in health care and social assistance businesses, then pay rises are around 2.4%. However, if you’re in mining, it’s around 1%.

Increased foreign as well as online competition, subdued yet positive economic growth rates, political uncertainty — here and abroad — and the end of the mining boom has seen wage rises be trimmed back. And the ABS says two-thirds of the decline in wages growth is due to bosses giving smaller rises.

A lot of that would be because their businesses aren’t going gangbusters. Some of it would be because part-time work has increased. Some of this would be because employers are responding to the current economic challenges but socially, many Australians want part-time work. Mums at home wanting to build the household income, young people who don’t want the daily grind, work-sharing couples who want to both work but be involved with their children and early retirees, who want or need extra income, are all part of the workforce of the 21st century and it might make these old world charts more difficult to totally rely on.

That said, Donald Trump talk of great infrastructure spending and tax cuts couldn’t come at a better time, as it’s encouraging other governments around the world to think about great spending in their budgets.

This might raise concerns about debt ratings agencies and potential interest rate slugs but maybe it’s time we thought outside the square and endured slightly higher interest rates to see the economy fiscally inspired to pump up growth, create more jobs and to raise wages.

I doubt we’ll see wage rises of the magnitude of pre-GFC days until the world economies are all growing madly and that might take some time.

Also, don’t forget that the Internet has not only made it easy for me to buy a Burbury suit online for hundreds of dollars cheaper than David Jones, I can get bookkeeping, computer support and software programming in India, China and the Phillipines for wage rates that have to be restraining the rise of local pay rates.

We’re living in a world where consumers have so much choice and it’s keeping inflation down and improving the purchasing power of our wages but it’s also helping to slow down the growth of those wages.

It’s a new world problem but might not be as serious as it would’ve been pre-Internet. I hope I’m right.