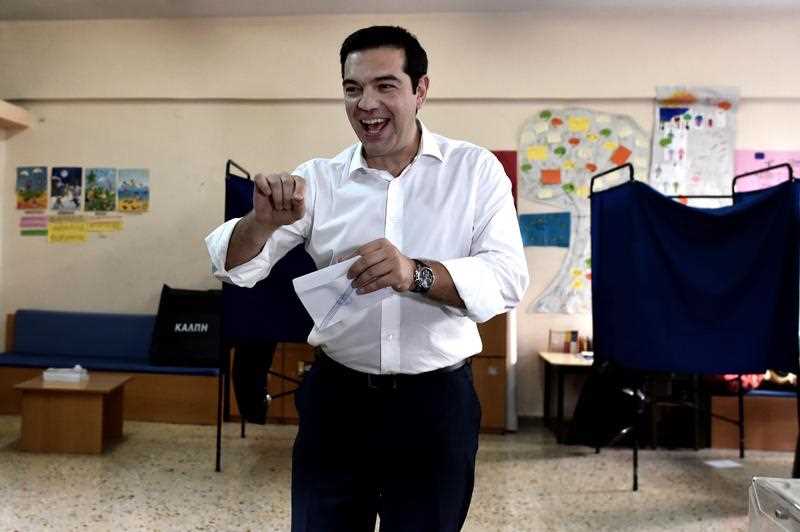 The referendum question was like an economics question set by a mathematical genius who doesn’t understand the IQ levels of normal people!

This is how the BBC headlined their main story on the poll: “The Greek referendum question makes (almost) no sense!”

Here it is — read it and weep.

In case you haven’t followed the story closely, the ‘Yes’ campaigners argued that if you vote yes, then Greece stays in the Eurozone and the euro isn’t replaced by the drachma. The ‘No’ campaigners — PM Alexis Tsipras is the chief supporter, obviously — said you vote no if you want Greece to stay in the Eurozone too!
Tsipras says he’ll get a new debt deal within 48 hours if the country votes no, which is surprising the European lenders and anyone who has any brains.

The PM said he would resign if the no-vote didn’t get up and so did Finance Minister, Yanis Varoufakis.

It now looks like the No-vote is the majority vote which means stock markets will fall  (I’d put my money on that) and the Greeks are set for a rough week, with apparently only 1 billion euros left in the banking system.

Any way you look at it, the Greeks are dependent on the Eurozone — dependent on bailout money, banking system money, tolerance for easier debt repayments and permission to run their economy the way they want to.

However, the Greek Government says it is fighting for the democratic right of the Greek people to run their own country, but debtors nearly always give up rights when they use other people’s money.

Other countries have surrendered their democratic rights when they’ve gone cap in hand to the likes of the IMF. Generally, if they follow the conditions that go with the money, it all works out well.

Undoubtedly, the austerity program has been too tough but the Greeks have been the world’s greatest tax dodgers, the biggest pension payers
and are simply not good at competing against other countries. That’s why they don't have enough exports.

The best export industry is tourism (worth about 30 billion euros a year) but what’s this debacle doing to tourists’ expectations, with queues at ATMs with 60 euro limits and many running out of money, even though tourists can get bigger withdrawals, provided there’s money in the machines.

In a nutshell, here’s my view on Greece and the No vote:

On CNN, a young Greek said he voted no as he does “not think that things can get any worse” but he could be in for a huge shock!

By the way, before jumping on the plane to fly home, my old academic mate Steve Keen, who I often disagree with about debt issues (and who now lectures at Kingston Uni in the UK) was on CNN and surprise, surprise, he’s arguing the case for the No-vote!

Steve is a lefty at heart and is a mate of Yanis Varoufakis. He thinks the lenders need to show more compassion to the Greeks and they could even default on 100% of the money they owe.

Now that would rattle financial markets and that’s why a No-vote will make for market mayhem this week. By the way, I don’t think it would last all that long but it will still be pretty scary.