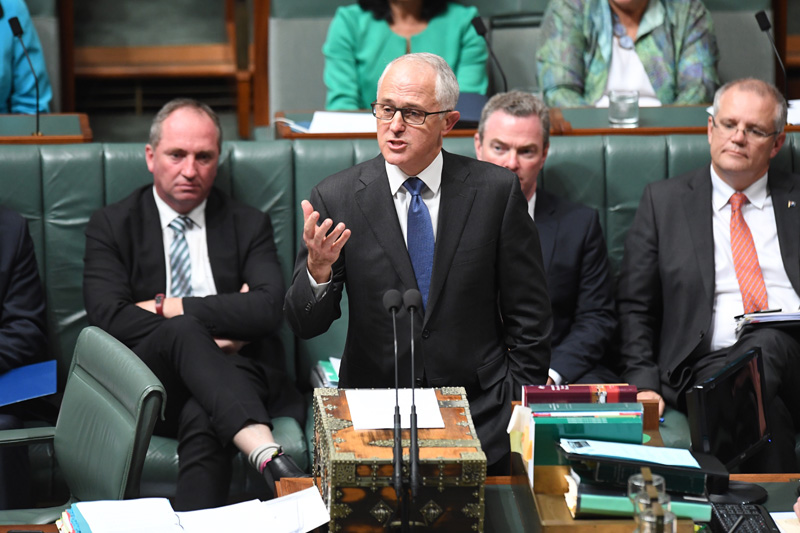 The failure of Donald Trump’s healthcare reforms to gain Congress approval was not well received by financial markets, though the sell off was not dramatic. However this week is bound to tell us how the big drivers of the stock market feel about the Trump trade.

The Dow Jones index lost 59 points, while the S&P500 slipped 1.98 points but the Nasdaq actually rose 11 points! Trump still has his supporters as now, on his own admission, he’ll put the American Health Care Act on the backburner and concentrate on his tax reform package.

But the question the market will wrestle with this week will be this: if he can’t get health up, how will he bring the company tax rate down from 35% to 20%?

Malcolm Turnbull has a tax tussle ahead of him before the second Tuesday in May when his Treasurer, Scott Morrison, attempts to win back the economic agenda and credibility for his PM and his Government.

They too have a company tax cut on sale for the public and, more importantly, the Senate with its ragtag mob of crossbench sitters, to buy. However, it’s going to be harder reform to sell in Canberra than in Washington D.C.!

It comes as the PM’s latest poll was another shocker and indicates the ‘Snowy Mountain high’, with its new power play, hasn’t lasted in the minds of the public.

Who should be surprised when you look at what Malcolm Turnbull has to fight? I will list them:

Is it no wonder that today's Fairfax-Ipsos poll finds that Labor is ahead by 55 to 45? In fact, the Essential poll had a similar result and both of these are in contrast to the one good Newspoll after the Snowy announcement.

So what does Turnbull have to do in the six-week lead up to the May Budget?

Should he learn from Donald and how he responded to his healthcare kick in the bum?

After his defeat, Trump posted a tweet urging his followers to watch host Jeanine Pirro on Fox News on Saturday night. She opened her show by calling on Ryan to resign because "he failed to deliver the votes on his healthcare bill".

He told the Republicans who voted him down that they can keep Obamacare, while he now would try and get his tax reform package through. Unlike Malcolm, he attacks when he’s threatened. I think it’s time Malcolm got on the front foot.

Trump has certainly a lot to learn about Washington. If he fails with his tax reform policy, the stock market will sell off big time. Many experts thought that if he failed, the market could drop big time but possibly his quick switch to tax reform could save the market from a big dip.

Right now, Tony Shepherd, the former Business Council President, has put out a report from the Menzies Research Centre that “warns that the government’s welfare and pension spending is fuelling ongoing deficits and has the potential to cripple the nation’s finances.” (The Australian)

And it comes when we face a Budget dilemma. This is how the Report explains it today: “Australia is entering its eighth consecutive year of deficits, with net debt ballooning from $152bn in 2013 to an estimated $317.2bn in 2016-17. The current level of government spending is simply unaffordable.’’

Here, in Australia, 73% of the Government’s revenue comes from company and individual income taxes, which is one of the highest ratios in the world. “Less than 0.1% of companies deliver 59% of company tax revenue, while 9% of individuals pay 47% of income tax. The government depends on company taxes for 17.1% of revenue, compared to the 8.8% OECD average,” the Report reveals.

The Australian quoted mining magnate Gina Rinehart, who has put the following out: “Lower company taxes wouldn’t just benefit a few wealthy people, but all those families who own shares in companies, as well as those employed and seeking employment, and benefit all who have superannuation funds.”

This is all true but Gina is not easily sold to the population, the voters, the right-wing lovers of Tony, the ABC lefties and the crazies in the Senate.

Malcolm has to become the leader we need. I suggest he starts to fight and gives up on his Mr. Nice Guy or it will be more of the ‘same old same old’ for the next two years before we welcome in Prime Minister Shorten.

Both Malcolm and Donald have a tax test ahead and, if they both fail, the recent stock market optimism could turn to pessimism.