These three headland speeches could be â€˜make it or break itâ€™ events for the Turnbull Government.

Treasurer Morrison is about to speak. I hope he's learnt how to sell!

Get ready to see a lot of my old economics student Scott Morrison, as he’s set to deliver three headland speeches. The message of these speeches should tell us if he and his boss are moving up the learning curve of being really great national leaders and reformers. However, given what I read today in the Fairfax press, we could be set to hear the stuff that Treasury people are known for talking about.

And while there’s always merit in some of Treasury’s worrying and warnings (because they come from economists/accountants who double as public servants), never expect anything uplifting, life changing, or attitude altering.

Scott is set to publicly worry us about a recession, though most chief economists I interview aren’t seeing that over the next 18 months. That said, I do have a bet with the scariest economist in the world, Professor Steve Keen, who tips a recession in 2017. That should surprise you — not!

If I win, he has to take us to the most expensive Chinese restaurant in London, where he now resides.

Back to Scott and he’s going to appeal our shared fear of our children seeing a recession, which he insists he doesn’t want his kids to experience. No one would argue with that but the history of economies suggests that it’s inevitable in their lifetime.

We’ve done something unusual avoiding a traditional recession for 25 years. A recession is defined as two quarters of negative growth, so it’s been a great effort. If we can go 104 quarters without a recession, we’ll break the record set by The Netherlands of 103 quarters between 1982 and 2008, thanks to North Sea oil.

This chart below from Quora.com shows how often recessions show up in the US. Some say every 10 years but it’s safer to say 5-15 years, so our effort has been huge! 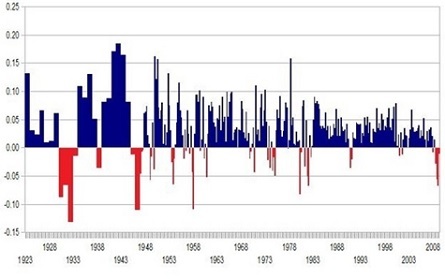 So, Scott me old mate, you and Malcolm T will have to come up with something great to keep the R-word usage in the media under wraps.

I think a recession looks likely when there’s another stock market crash and, as a publicly noted bull on stocks (and as I have been since 2009 when stocks started to rise after the GFC stocks smashing), this will surprise many.

I hate to be unnecessarily negative but recession and stock market crashes are a fact of life, so Scott’s and my kids will see a recession but great leadership (and some good luck) could make it a mild one.

Politicians can’t determine good luck — I guess you’d call that a ‘white swan’ if a surprise bad news event that rocks the market is called a ‘black swan’. That said, as great golfer Gary Player made famous, “the harder you practice, the luckier you get.”

And way before him, the US President, Thomas Jefferson, said: “I’m a great believer in luck, and I find the harder I work, the more I have of it.”

Scott and his boss have three years to make their own luck and these three headland speeches could be ‘make it or break it’ events for the Turnbull Government.

Right now, they only look OK but this week we learnt that the ANZ/Roy Morgan consumer confidence reading was at a three-year high. That’s good and business confidence has been above average for some months.

Has anyone told you that? You might hear that stuff from me, but has anyone from Canberra told you about that?

Scott can talk about the importance of beating down the deficit and mastering our debt, which is more a private debt problem than a government one, but it would be great if our debt was KO’d as it was under John Howard and Peter Costello.

These guys were helped by the China boom but they also had guts, reducing the deficit into a surplus and killing debt. Recall they sold the GST and other tax reforms, which partly explains why we’ve grown for 25 years.

Paul Keating fought the deficits too but the 1990 recession hurt that effort, as those things create big budget deficits. However, he and Bob Hawke sold us a floating dollar, bank deregulation, the Accord, reduced trade protection and the subject that the galah at the local pet shop was talking about — microeconomic reform!

Our former Treasurers sold us reform and that’s what Scott has to do in these headland speeches. However, he has to also sell us the need to spend on roads because our capital cities are choking the overall economy and hurting business productivity.

But here’s my big sales tip to Scott: get out of your office and sell your message to Pauline Hanson, Derryn Hinch and the rest of the Senate’s new kids on the block.

When Tony Abbott and Joe Hockey were having trouble with their first Budget, which was the start of the rot that eventually brought them both undone, I interviewed Peter Costello.

I asked him how he would’ve handled that weird Senate mob, who’d been described as the “Cantina scene from Star Wars”.

He said: “I would’ve got out of my office and went down to Ricky Muir’s, and I would’ve said, ‘Ricky let’s go for a drive.” Ricky represented the Australian Motoring Enthusiast Party and it showed that when it comes to sales, you can’t afford to be long on hubris.

These headland speeches can’t be political speeches designed to embarrass Labor because it won’t work. Labor is basically saying “we agree with you, the deficit must come down but we will get richer Australians to pay for it, while you want poorer Aussies to pay.’

The greats of this world from Richard Branson to Steve Jobs to Winston Churchill to Nelson Mandela were all in ‘sales’, they just had different messages.

I think Scott has the potential to ‘sell’ but he needs work to get to Keating and Costello standards and his boss really needs help.

I watched Malcolm greet home the athletes on Wednesday. GG Peter Cosgrove went up the stairs first and plonked a kiss on Anna Meares! It was so Aussie. It was so us and then Malcolm puts out his hand with a stiff back and looked so awkward!

Napoleon Hill who wrote the book Think and Grow Rich once observed: “The best way to sell yourself to others is first to sell the others to yourself."

Malcolm, given your huge sales task ahead (selling your tougher policies and even harder, yourself), you have to show us the love.

There’s another that both Malcolm and Scott should never forget: “People do business with people they like.”

Great leaders listen and learn and are committed to self-improvement. Scott, I hope your headland speeches want to make me buy what you’re selling.