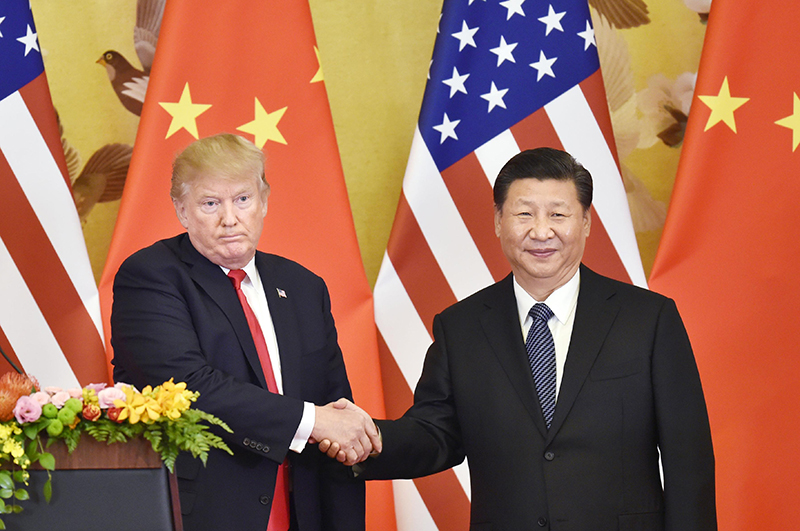 Trades talk progress and you will get richer

There’s been trade war talk progress but don’t dismiss this as irrelevant to you as your super, your job, your house price and your business could be smashed if the US and China can’t come up with a deal. Overnight there were good news stories and stock markets have liked it but there’s more at stake than just stock prices.

And anyone who doubted the fairness of my criticism of Donald Trump’s troubling trade tweeting and its associated negative implications for stock prices got a “I told you so” lesson overnight, when combined positive comments from the US President and the Chinese leadership saw stocks lift globally.

And yep, standby for a great day for stocks locally. Only Donald dumping another left-field barb at China could ruin an overdue bounce-back for local stocks.

Let me be completely transparent here. I not only feel for all my readers’ losses with their investments and their super funds, I also care about the unit price for my listed exchange traded product — the Switzer Dividend Growth Fund or SWTZ as its stock market code goes.

I shuddered when I saw it at $2.30 — intraday — this week as our market plummeted, thanks to provocative trade talk from Donald and a Huawei executive was arrested. 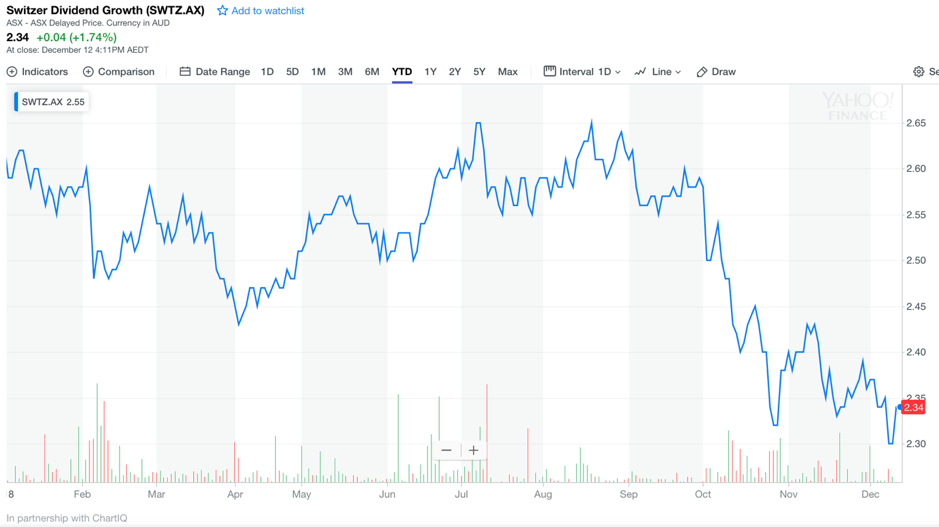 The finance.yahoo.com chart above shows we hit our equal all-time high of $2.65 on August 20. It matched the other high on July 9. And both times it was a Trump tariff tantrum that spooked the stock market and took our unit price down. Also taking the price down have been some pretty good dividends, and in case you don’t get stock markets, if a stock is trading at $2.65 and pays a 5 cent dividend, the stock will usually fall by 5 cents on the day it goes “ex-dividend”.

Most stocks that pay dividends (and not every company pays dividends) pay them half-yearly, whereas SWTZ pays quarterly so we get drops four times a year. But Donald, and fears that the Fed might raise interest rates too quickly, have been hurting the overall Aussie stock market. Given SWTZ is heavily influenced by what happens to the leading companies in Australia and their share prices, it’s held us back too.

Yep, that means SWTZ holds bank shares and even Telstra (albeit a very small holding) because they are great dividend-payers – but these stocks have had an annus horribilis!

Telstra’s CEO Andy Penn has had to face up to the end of the NBN windfall and it comes as his rivals are getting more competitive. Optus has started to ‘run faster’ as a telco competitor and it coincided with its tie up with Usain Bolt in their ads!

And Vodafone has lifted its game, which had been disappointing and then came up with the big play of hooking up with TPG.

Meanwhile, the banks have copped the Royal Commission, with the likes of CBA losing around 18% over the year at its worst! Meantime, the S&P/ASX 200 index has lost around 9% over the year-to-date but from its high this year, we’re down 12.2%, which is a correction. (Any drop 10% or more is a correction and  a 20% or more wipe-out is a crash in the stock market caper.)

SWTZ has dropped 12.4% but we’ve paid three distributions. And as the July 11 distribution was 5.94 cents and the October 2 one was 5.05 cents, it explains why our drop was a little larger than the index.

In total return terms, we’ve beaten the ‘mum and dad index’ of the Big 4 banks + TLS, which was our plan when we constructed a ‘stock’ or ETP that would keep paying dividends during tough times but ride up with the market, albeit at a slightly slower pace because reliable dividend-paying companies don’t see their share price spike as fast as growth or tech-like companies.

I guess we come from the old adage “slow and steady wins the race” but it’s damn hard trying to pick up the price-paying pace when Donald Trump, and China to a lesser extent, keeps throwing curve balls at us!

The good news overnight was Donald and China got it right and stock markets loved it. The German DAX was up 1.38%, the French CAC rose 2.15% and even the UK’s FTSE put on 1.91%, with all of its Brexit dramas!

The Dow spiked over 450 points, after China said it would replace its Made in China 2025 plan, which was pro-China businesses and a tad anti-foreign.

President Trump joined in to say he would intervene in the Huawei’s executive case, if it was to affect the potential trade deal. The company is a huge tech company and the Chinese leadership view it with pride but it has been banned in many countries, including Australia!

The President told Reuters he would not raise tariffs on Chinese imports until all his trade talks have concluded. This tells the market, if he gets what he wants, to an acceptable deal, then there’d be a tariff ceasefire and stock markets would love that.

Showing China’s sensible actions, Reuters also said Chinese state-owned businesses bought 500,000 tons of soybeans from the USA on Wednesday. And there were reports yesterday that China would cut tariffs on US cars from 40% to 15%, which other countries pay.

A mature and fair deal for both parties (Donald hasn’t been all in the wrong, as China has been playing unfair on trade) would be great for stocks and help bolster world economic growth, which helps the economy of a country like Australia. We are an open, trading economy and if the trade war gets even hotter, then we will grow slower, unemployment will increase, some businesses will go broke and stock prices will crash and our super fund balances will fall very substantially.

And my SWTZ will fall with the market, though I’d expect our dividends would do OK, as dividends don’t tend to fall as quickly as stock prices. However, for obvious reasons, I’m rooting for a trade deal to evolve over the truce period — December 1 to February 28 — and so should you.

If that happens and we see the Hayne recommendations from the Royal Commission in February, and then the Government and Labor tell us how they will punish financial businesses after the election, local financial stocks will probably get a boost.

Right now, uncertainty has probably hit bank share prices too hard and as financials make up 33% of the overall stock market’s value, then any rise in these stock prices will really help the S&P/ASX 200 index and SWTZ.

One last point. I created SWTZ to help mums and dads who often simply held the four banks and Telstra in their self-managed super fund, which I always told them gave them too much risk. They would tell me that these are great companies and pay great dividends but they didn’t expect a Royal Commission and Telstra to be taken to the cleaners!

It’s the strongest real world case for being diversified and for holding 20 or more stocks so you are not too exposed to a government decision or a dumb CEO.

SWTZ holds 30-50 stocks, which can be hard for an individual to manage and shows I like diversification. Warren Buffett, one the world’s greatest investors once joked (though I think he was a little serious as well) when he said “diversification is for wimps” and so that makes me a wimpy investor.

For my SMSF, I want good income, steady rises in my stock prices and not too dramatic falls when stock markets get crazy. If that’s being wimpy, I’m happy with that and I’m happy Donald and Xi Jinping are working to improve the performance of our stock market and SWTZ.