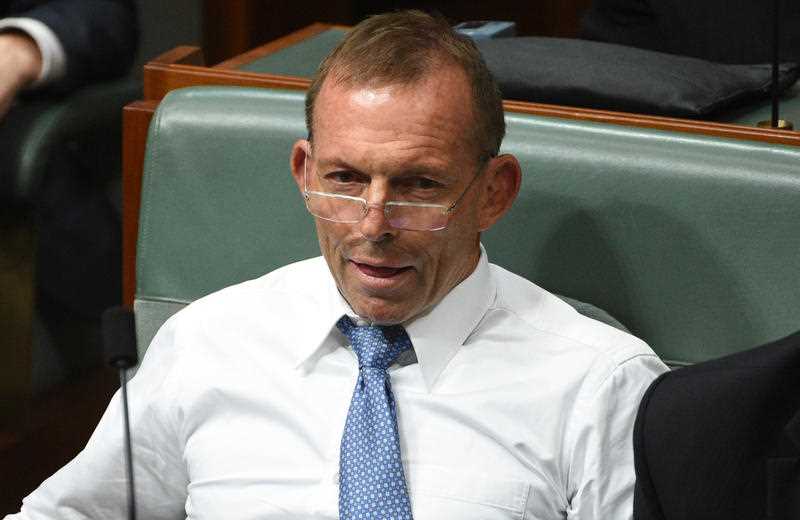 Put two newsworthy people together — even if they are ultra-conservative Tony Abbott and Andrew Bolt — and the media, including the leftish Fairfax outfit, can’t help but report the get together.

News Ltd’s hotshot, right-wing commentator Andrew Bolt has started a new Sky News program at 7 pm — the same time my show starts. Thank God I get repeated three times, with the last one at 5am the next day!

In a wide-ranging interview with Abbott, Bolt asked touchy questions around why he didn’t cut Peta Credlin and Joe Hockey, to which Abbott replied: “I don't think it makes sense to throw people overboard to save yourself.”

Abbott also admitted that he didn’t think there’d be a second coming for himself as leader, which would have disappointed the right wing of the Liberal Party.

It was a well-received interview but no one has reported what he told me straight after the interview and it’s a Budget bombshell!

You see, as Bolt works out of Sky’s Melbourne studio (and he’s making my Melbourne interviews a little bit tricky at times!), Tony was in Sky’s studio 3 in Sydney. As the former PM got out of the chair, I had to jump in, so we caught up for the first time since he’d lost his gig.

I’ve always got along with Tony, though I haven’t always agreed with his ideas and policies but that’s life for a commentator. Being  a Budget tragic and not prepared to let tedious political differences get in the way of economic reality, I said to him: “I supported your and Joe’s last Budget and it did the trick with the 3% growth for 2016.”

He acknowledged the fair call but then said two things that are critical underlying issues for next Tuesday’s Budget.

First, he said “the Australian people respect leaders who make tough decisions”. And second “everyone opposed David Cameron’s tough economic policies after the GFC and see how the UK economy has come back.”

Both these observations say a lot about how Budget time must be seen by Tony as a tragic reminder of two ironies that would have haunt him.

Let’s face it, he’s a very competitive guy and losing to Turnbull would have been gut-wrenching. The first irony was that his first Budget was seen as so tough that the crazy Senate wouldn’t pass it. That lot copped their comeuppance, with a double dissolution election bound to end a number of their careers.

By the way, when Joe Hockey checked out for his last day as Treasurer, I sent him a text wishing him the best and reminded him that he got it exactly right with his last small business Budget and the economy responded well to it. He called me back and thanked me. And when I asked him if it was wise to go for a tough first-up Budget, he revealed that he and Abbott had been given undertakings from Clive Palmer to support them.

That’s a lesson for all of us when it comes to relying on certain kinds of people.

If that Budget got through, the question is: would we be in a better Budget situation? I think the answer is ‘yes’ and the debt ratings agencies would not be saying our triple-A rating could be lost if this Budget is too soft.

However, our economy would be growing at a much slower rate. Tough economic medicine takes time to work and Cameron’s UK economy look stuffed for some time after he handed out his bitter economic reform pills. The Poms were luckier than, say, the Europeans, who opted for a softer response to the GFC, in that the pound devalued, which helped the UK economy grow and recover. It wasn’t just down to hard economic policies.

The second irony was the Oz economy improved strongly after Tony lost his job and I argue that Joe’s Budget, the big fall in our dollar (which our former leader didn’t get much help from) and Malcolm’s new leader confidence effect, explained why our economy rebounded in the last six months of 2015.

Now Malcolm has lost his charisma-rating and he and Scott Morrison have backed down on tough decision, such as a higher GST. Giving support to Tony’s argument, the lack of tough decisions and falling popularity could be linked.

I guess it was argued that him not sacking Joe and Peta were seen as weak points for him.

The bottom line is that it’s easier to talk about and aspire to leadership than it is to actually lead. And that goes triple when you try to lead the country — ask Kevin Rudd, Julia Gillard, Tony Abbott and now Malcolm Turnbull.

This Budget on Tuesday will define not only the upcoming election campaign but Malcolm Turnbull as a leader and economic navigator at a time when the Oz economy is in some very tricky waters.

It will have to be soft enough to encourage business and consumer confidence but tough enough to satisfy the likes of the Moody’s debt rating agency and the media, who know that Malcolm and Scott Morrison need to bring their best game to Canberra next Tuesday.