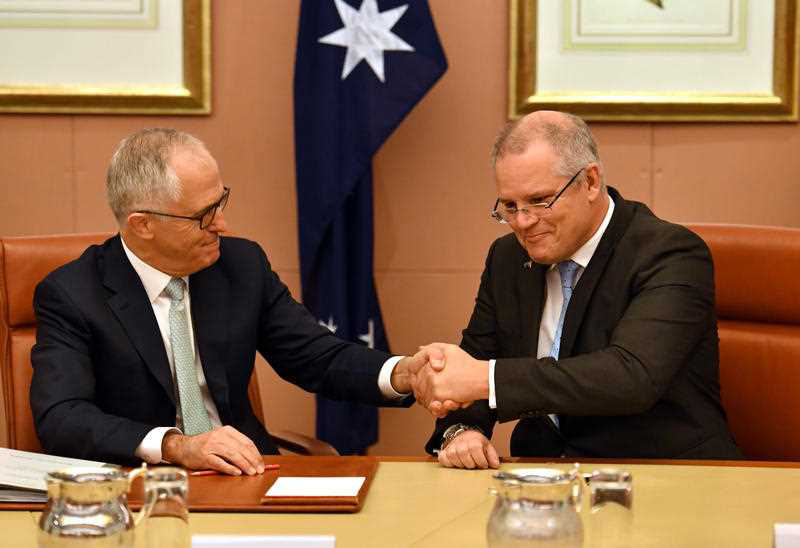 Tonight's the night: is the Budget gonna be all right?

As an economist, who formerly taught economics at the University of New South Wales, I get the Budget. However, because of my teaching of some of the smartest people in the country — which includes the Treasurer Scott Morrison — I know most Aussies really don’t understand the many figures that are thrown at us at 7:30 pm on the second Tuesday in May (tonight!).

For that reason, I want to give an every person’s guide to assessing the big issues of the Budget. The small picture — your microeconomic story — is usually pretty easy to work out after a couple of days of sifting through the news stories. If you gain or lose some Government entitlement, you can rate the Budget on a personal basis but the really important rating has to be what the Budget does for:

These are big and crucial issues for the economy and the people who live in it and while your potential, individual position is important to you, a Budget has to be assessed in terms of its value to the majority today and into the future. Yes, there has to be an intergenerational responsibility considered when a Treasurer comes up with his economic game plan for the year and beyond, which gets factored in when assessing the value of any Budget strategy.

So what’s the best guess on these important tests of a Budget?

On economic growth, I’d be surprised if the Treasurer tips 3% growth. Last Friday, the Reserve Bank said it thought growth would be 2.75% to 3.75% over the upcoming financial year. If that turns out to be right, then unemployment should fall to 5.5%, which both AMP’s Shane Oliver and CommSec’s Craig James are forecasting. So far, so good, for tonight’s Budget.

On taxation, we’re expecting to see something to reinforce the idea that company taxes have to fall over time. The pressure from President Trump’s tax reform agenda is being felt worldwide so it would be surprising if Scott Morrison doesn’t mention lower tax rates tonight.

By the way, while rates might fall, overall tax collections are rising. Over the weekend, Craig James informed me that: “In the 12 months to March 2017, the Budget deficit stood at $38.6 billion (around 2.3% of GDP), up from $37.53 billion deficit in the year to February but better than the average deficit over the past year of $39.3 billion. Average growth in company tax revenues in the last three months has been the best in 4½ years.”

And GST revenues are also lifting, currently at record highs for a 12-month period. “Spending is growing faster than the growth rate of retail trade, suggesting that businesses and service sectors are doing better than goods-dependent operations,” James added.

I’m tipping a tick for taxation in tonight’s Budget.

On spending, I’m expecting more of the kind that drives up good debt, such as outlays on infrastructure, which means the likes of Sydney’s second airport. I’d say some entitlement cutting will be called cuts to recurrent spending — spending that shows up every year, such as part-pensions to those who the Government says don’t need it. Last year’s Budget covered this but expect more cuts of this kind to prove to the debt rating’s agencies that the Turnbull Government has the guts to do the right thing, at least on an economic basis.

On the Deficit and Debt, this chart shows you how disappointing Treasurers have been in the past, in taking us to a beloved Budget surplus. Take the green line, which was the 2012-13 Budget of Wayne Swan. He promised a surplus by 2015-16. The 2013-14 Budget — the purple line — added a year on to the goal but, as we know, that didn’t work out. The conclusion about these promises is that they’re not worth the hot air they’re made on but we’ll still look at Scott’s promise on the matter. 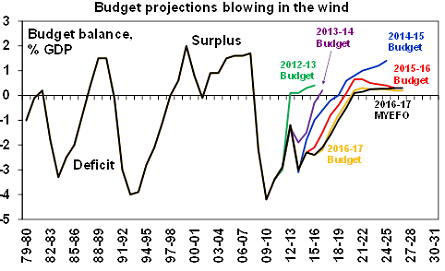 In simple terms, this year’s Deficit will be around $36 billion and tonight’s prediction could come in at approximately $28 billion, showing that there is some improvement.

The slow improvement can only be justified by the importance and the need for infrastructure spending, which will slow up the march towards a Budget Surplus. However, if it works and creates faster economic growth, then the Deficit could disappear quicker than we think.

After all this is taken into account, we then have to work out what happens to interest rates, wages, business investment intentions, the dollar, the stock market, etc.

And this is how I make the final call on the Budget. A good Budget will pump up economic growth, business and consumer confidence, business investment, wages, the dollar, the stock market and interest rates will go up over time, as all the good stuff mentioned in this sentence comes to pass.

This is the importance of the Budget and how it will be assessed but there’s one huge thing I’ve left out. And that’s the crucial role that the Senate now plays in passing a Budget.

A great Budget — economics-wise — is useless if the Treasurer and Prime Minister can’t sell it to the cross benches. And that’s why we’ve ended up with zombie measures outlined in previous Budgets that have never been passed by the Senate.

What I want to know on the day after the Budget is: will Pauline Hanson, Nick Xenophon, Derryn Hinch, Cory Bernardi, Jacqui Lambie, David Leyonhjelm and the other wild and wacky Senators pass this damn thing?

If they don’t, then it’s going to more of the same and one day Moody’s will come knocking and rock us with a credit downgrade, which will push interest rates up without all the good stuff a great Budget can deliver — higher wages, more investment, jobs, etc.

Many Australian voters put our fate in the hands of a Senate that’s not my kind of Senate. Good luck Scotty!