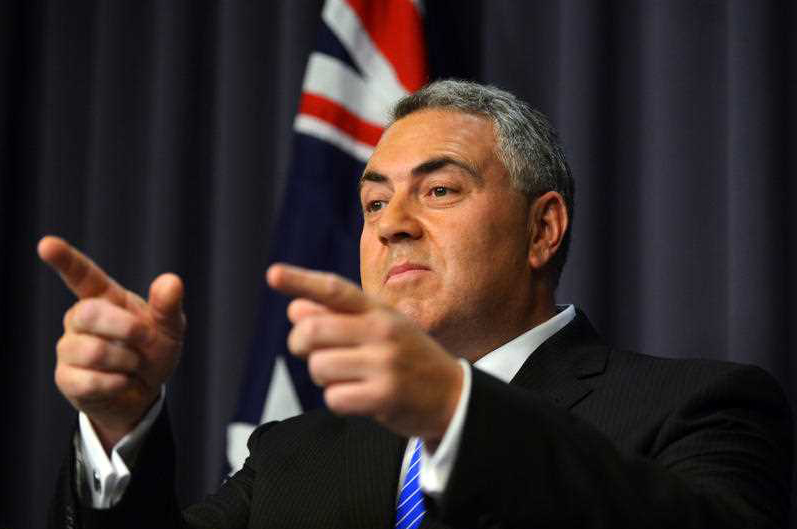 Tonight's the night. I hope Joe's alright, for the economy's sake!

Tonight is huge for Treasurer Joe Hockey — it’s Budget night and he’s under media pressure from the rise and rise of Scott Morrison. And the fact that the economy’s future and Prime Minister Tony Abbott’s job are still looking precarious means Joe simply can’t fail.

If he does stumble over the next couple of weeks — that’s all he’s got — then you can blame the Senate’s intransigence driven by Labor’s desire to get-even with Tony Abbott for his demolition job on Julia Gillard. But that’s an Opposition’s job, I guess. You can blame the media, who either hate Abbott or simply love pouring fire on a political bonfire, no matter the economic consequences. Unfortunately, that has become the media’s prime task — without fear or favour! Well, maybe without fear.

I have to admit I’m terribly conflicted on this whole subject. Regular readers know I’ve been trying to coach Joe from the sidelines and have been telling him to do what he’ll do tonight for over a year. This time, the armchair critic was right. I knew the economy was weakening and that’s why I told him to throw away the political playbook of being tough in the Budget in year one and try to win them back in years two and three.

But as I say, I’m conflicted on this subject. I like Joe, I taught Scott Morrison economics at UNSW — I know he has been well taught! — and I’ve known Malcolm Turnbull since we were teenagers, when I was his patrol captain at North Bondi surf club. Interestingly for Malcolm, our club motto is “Ready Aye Ready!”

Deep down, I’d like to see Joe succeed because if he pulls this Budget off tonight (and the media reaction will be important) then it will be great for both business and consumer confidence, which has been struggling since last year’s Budget. Of course, the media reaction will have to be tempered by this vital question: “Is this Budget good enough to get through the Senate, pronto?”

I know Labor, the Greens (with their new leader, Richard Di Natale), the PUP team and the show pony Independents all have to do their thing but I’m hoping national interest eventually wins through. My naivety even worries me a little!

That said, I have to get it out there that unnecessary Senate obstructionism will hurt the economy, close businesses and lose jobs. Our growth rates are at 2.5%, if we’re lucky right now. Even next year, the outlook is around 2.8%, unless some good stuff happens tonight and in coming months from around the world.

Bond market actions overnight spooked the Dow and US investors and it’s saying that interest rates are expected to head up, partly because of some better signs for economies, such as the US, but also because inflation is set to rise with oil prices on the improve.

We can’t afford to let politics win over good economics. This is what Joe has to beat with his Budget over the next two weeks — that’s all he’s got.

Of course, I’m a realist. If the fiscal document tonight isn’t sellable or won't help growth, then I’ll have to say it. It will mean that the mainstream media will go Joe, Tony Abbott and their so far unconvincing Government.

Tonight’s the night. It has to be good, Joe. I really hope, if it’s a good plan, that it’s given a go, even if a few groups are hard done by. After all, budgets always have winners and losers — ask big smokers, drinkers and car drivers.

That aside, I hope nice guys, like Joe, don’t have to finish last, though recent history worries me.

Successful political combinations show that Bob Hawke was the man of the people, while Paul Keating was portrayed by cartoonists as the undertaker. John Howard became more likeable in the job as PM but Peter Costello was portrayed as the less sellable Scrooge.

On the other hand, Tony Abbott has a queue of haters as long as the Murray River, while Joe is Mr. Likeable. That’s going to be very hard to change, I suspect.

One final thing for those who so easily tear down the likes of Joe and to some extent find it easy to hate politicians. I can’t help but recall the words of Theodore Roosevelt:

“It is not the critic who counts; not the man who points out how the strong man stumbles, or where the doer of deeds could have done them better. The credit belongs to the man who is actually in the arena, whose face is marred by dust and sweat and blood; who strives valiantly; who errs, who comes short again and again, because there is no effort without error and shortcoming; but who does actually strive to do the deeds; who knows great enthusiasms, the great devotions; who spends himself in a worthy cause; who at the best knows in the end the triumph of high achievement, and who at the worst, if he fails, at least fails while daring greatly, so that his place shall never be with those cold and timid souls who neither know victory nor defeat.”