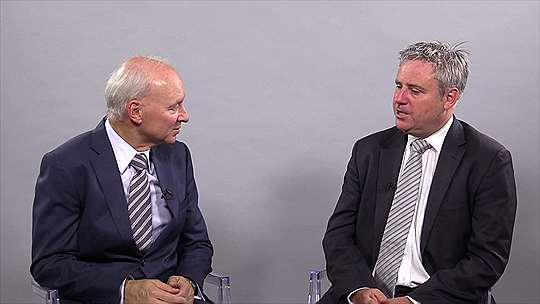 Thinking and investing outside the square with me

One of the greatest non-family influences in my life was the man who coined the term lateral thinking or thinking outside the square — Edward de Bono. I thought of him this week when I wrote an explanation of our new investment fund that will list on the stock market in three weeks' time.

I wanted to tell you about the fund in great detail but my colleagues said we have to get it cleared by the lawyers because the regulators can be picky over anything that might be misinterpreted by potential investors.

That’s fair enough as there have been some dodgy people and products in finance over the years and in many ways that’s why we started Switzer Financial Services. For years, I’d passed on people who wanted financial help from me as I was a finance educator not a financial planner.

Thinking inside the square we started a financial advice business but in those days most advisers were getting under-the-table commissions, so we thought outside the square and rebated commissions and basically went to market with a motto: “Guidance you can trust.”

de Bono told me about 17 years ago on my old Talking Business program, which I started for Qantas, that the high achievers of the world think outside the square and our Switzer Dividend Growth Fund is exactly that. We are looking for companies that pay dividends and grow their dividends and basically the fund has been designed to copy the way I invest.

It’s funny, if I was an inside-the-square thinker all of this regulation and need for lawyers would frustrate me but because I love lateral thinking and I am always looking for insights from others who are ‘out there’, I realise that a lot of people buy on feelings anyway rather than information.

This week, I interviewed Simon Senek who was in New York when we chatted but he comes here in March for a series of lectures.

His TED Talk was one of the most downloaded in history and he’s a signed up member of the ‘lateral thinkers club’.

He says science shows that most of us make decisions about purchasing not based on information, which is processed by the neo-cortex part of the brain but by the limbic part, which operates off feelings!

He says we might often say “it just feels right” or “it doesn’t feel right” and that’s our limbic part of the brain making decisions for us.

Sinek agreed when I suggested that while Steve Jobs was more limbic-centric, his genius partner was more neocortex and that’s why his computer was loved by his nerd mates but Jobs’ one became a world-beater and the basis of one of the greatest businesses of all time.

Remember Apple did not tell us about its great functions but pitched to us via “Think Different.”

Sir Ken Robinson thinks differently. His “Do schools kill creativity” TED Talk was the number one in the top 20 most watched!

He started his speech talking about a little girl in school who was drawing a picture in class and when the teacher asked her what she was drawing, she said: “God”. The teacher replied: “No one knows what God looks like.” And to that the little girl replied: “They soon will!”

He recounted the story of Gillian Lynne who was a troubled young eight-year old, who was not coping with the demands of school. She was taken to a doctor and after a chat he told Gillian that he needed to speak to her mum in private but as he left the surgery he turned on the radio.

Outside he told her mum to sneak a peak into the room and there was Gillian moving to the music and he said: “Your daughter is not sick, she’s a dancer!”

She was enrolled in a dancing school, went on to become a ballerina and later the choreographer for Andrew Lloyd Webber’s Cats and The Phantom of the Opera. She turned her gift that was not detected by the school system into a multi-million dollar business!

Kerry Packer and Richard Branson were dyslexic and school failures but it didn’t stop them achieving unbelievable life goals. It seems to me that if schools won’t do it, then employers and parents have to step up to encourage their people to be the best they can be.

And I think teaching them what Edward DeBono taught me would be a damn great start.

In my early days covering small business I came across a guy by the name of Michael Gerber who wrote one of the best small business books of all time called The E-Myth: Why Most Businesses Don't Work and What to Do About It.

This has sold millions of copies and the bottom line of the book is that most people’s businesses are frustrating and they are because they are un-systemised. They operate off the hard work and time put in by the founder but it’s hard to grow a business that has poor systems and is founder-dependent.

Why has McDonald’s succeeded largely run by people no parent or teacher can control — teenagers? It’s because they have great systems.

I emceed Gerber around Australia and he showed me how you can kill a frustration by creating a system and I’ve employed this business thinking to my general life so I don't lose my keys anymore!

In fact, my access to the pearls of wisdom that I share with you on the weekend has come directly from a system that means when I drive home from Sky TV each night I listen to something like Sir Ken Robinson to make me think outside the square even more and to get a competitive advantage.

I now get 100 minutes extra a week where I’m hanging out with really smart people and so I’m systemised to improve.

Great leaders are listeners and committed to self-improvement and, in that 20 minutes invested each night, I enhance my ability to lead others and gain some really valuable outside-the-square ideas to help me spread wisdom and hopefully happiness.

By the way, if you have a good feeling about my fund, as a financial planner I urge you to read the PDS and even seek advice to make sure it really suits you.