This perceived craziness is more a short-term thing and it creates profit-making opportunities for the long-term investor.

Stock markets and the punters who work in them are crazy. Yep, both the market and the honkies that try to squeeze short-term dough out of stocks, should be committed.

Let me explain why.

If you’re scratching your head about what’s happening on stock markets, then you haven’t be listening, watching, reading or thinking! On Wednesday, our market was down 117 points. It was the worst day on our stock market since September last year.

Then, on Thursday, we were up 103 points. What was it on? What I write below is my best decoding from the consensus of market-types, who watch stocks 24/7, minus a bit of sleep. And remember, I have a TV show on the Sky News Business Channel that hopes to explain what’s going on and what stocks look right to buy and sell. We do the form on the stocks that people care about and the overall market.

Generally, the simple view is that share prices are falling because future earnings for companies are expected to be less than what was thought around March-April last year. However, it’s a guess. And let’s hope it’s wrong and that earnings will actually be higher, driving the market up.

Check this out if you need your memory visibly jogged: 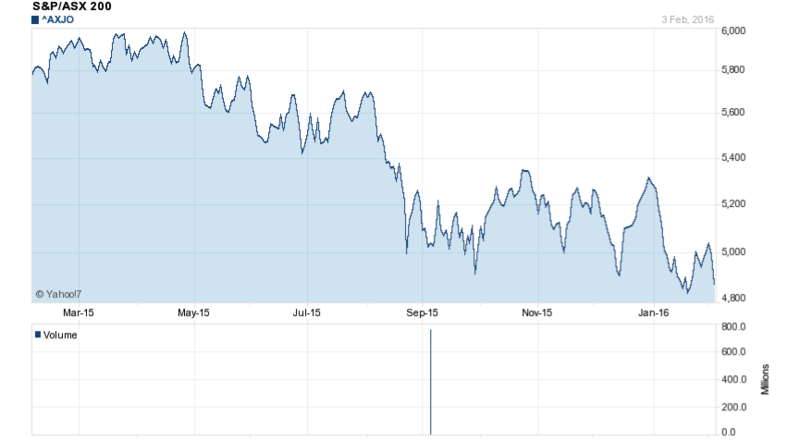 Since that time, commodity prices have fallen, China has looked weaker, its stock market has tanked, the US dollar has gone up (which not only hurts US growth, it takes commodity prices down, as demand is weaker and supplies are being ramped up) and the Fed started its interest rate rise program. There are other negatives but these are the biggies.

But let’s go back to what’s happening now and why it’s crazy.

I get the drop in the stock market from its highs last year but I think the fall to current levels, such as 4980 on the S&P/ASX 200 index on our market, is excessive. And it was more excessive on Wednesday, when it closed at 4876.6! But it is what it is (as the old saying goes) and I have to explain why. Unlucky me!

On Wednesday in the US, there was weaker than expected economic data on the services sector, so it is expanding but at a slower rate than expected. That led to the conclusion that the economy was slowing and the high US dollar would be partly to blame.

This led to the belief that the March interest rate rise in the US would be off the table and, maybe, the once talked about four rate rises could end up being two, or even one.

So the dollar fell and a falling US dollar raises commodity prices that are priced in US dollars. As a result, the oil price and iron ore price went up!

So US economic weakness is good for stock markets? And commodities that always do better — price and demand-wise — when the global economy gets stronger, become more valuable when the US economy looks weaker?

You can see why I think stock markets are crazy!

Of course, this perceived craziness is more a short-term thing and it creates profit-making opportunities for the long-term investor, when silly episodes take share prices down too far, as has been the case recently.

What seems to be going on can be summed up this way: when it was thought that the US economy was really strong, the market thought the Yanks would get four rate rises in 2016 and the greenback went up. This hurt commodity prices and stock markets, like ours. However, as the oil price went down, it hurt energy companies in the S&P 500 index in the US. And there were thoughts that banks that lend to energy and resource companies might be badly affected.

But now it’s believed that the US is less strong, so there’ll be fewer rate rises there. Then the dollar can go down, commodity prices can rise and energy companies are less vulnerable, so stocks can rise. It’s confusing, isn’t it?

So it was wrong speculation that led to stock prices going down. So the current speculation, which could be wrong if the US economy is actually better than expected, has taken share prices up!

This is a pretty good explanation of why I think stock markets can be crazy and why they’re particularly crazy right now.

On Saturday morning, we’ll see the latest US job numbers, which have been great for some time. If they remain great, then four rate rise expectations could be back on the table and the madness of this week could be reversed!

Of course, if the US slowdown is confirmed by the job numbers, then the stock market will have to work out if the pluses from less rate rises and a lower dollar are better than the negatives of a slower economy!

That will be the madness issue for next week, or some other week out there waiting to disturb our happy thoughts about how wealthy we are now and in the future.

By the way, Wall Street was up and down on Thursday, as the oil price went up and down, with new reports that OPEC and Russia might meet. If that happens and they agree to cut the supply of oil, then oil prices will rise, which will be a new crazy curve ball for stocks.