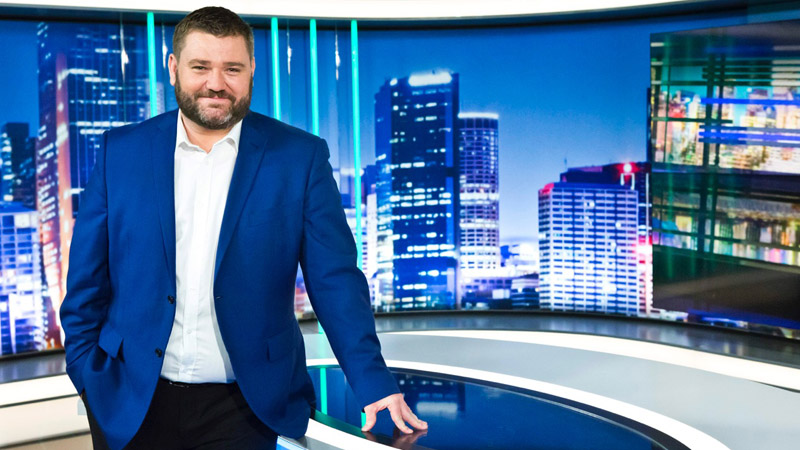 There's something about Murray

Paul Murray is becoming one of the most influential political commentators in the country with his nightly program on the Sky News channel attracting some of the country’s leading political and social figures. If you have never seen Paul Murray Live then you have missed what current affairs TV in the 21st century is, but more importantly, you have missed knowing one of the greatest human beings to have been given a gig that a hell of lot of us would have killed for.

Where were you raised?

Born and bred in Sydney. I’ve got a younger brother who is one of the most impressive people I know. Love him.

What was your schooling and family make-up in the early days?

I went to Epping Boys High School. In the early years I was the class clown and did almost anything but study. But as the years rolled on I calmed down, took it seriously and am pleased to say it gave me friends for life.

I’ve been with my now-wife, Sian, since high school. We made it through uni, first jobs, career changes and lives’ twists and married in 2008 in New York City. We’ve had the heartbreak of losing our little boy, Leo, in 2012 and the joy of meeting his sister Asher on Christmas Day 2014. Without doubt I wouldn’t be talking to you know if I didn’t meet Sian. She gives me confidence to be myself and never lets my feet get too far off the ground.

Any journalists in the family?

Not even in the slightest. My Dad’s a small businessman who used to drive buses and was a greens-keeper before that. Mum has always worked in the community sector specialising in mental health services. I didn’t grow up in a newsy house but I was inspired by my grandfather, who bought the paper everyday to take an interest in the world. By the end of primary school I read all the papers every day and was listening to talkback radio.

Early experience in journalism – how did you get into it?

Well, before news I had the best job a teenager could dream of. At 14 I worked at Triple J for a year. But by the end of school news was more my thing and I was lucky enough to meet my great mate Jason Morrison – now, Channel Seven News Director – who worked at 2GB. I shadowed him and hung around the newsroom for months before getting a cadetship. Before long I was one of the station’s main reporters before moving to 2SM and Nova969 in its first year.

I loved being a radio reporter – it forced you to cover lots of ground, be across lots of topics and find sharp, clear language to explain a situation.

I first heard of you when you got the Triple M gig, how did that come about?

A couple of years after joining the Nova newsroom I convinced them to let me stretch my funny muscles and they gave me a late night show. The guys at Triple M heard it, liked me and opened the door. I loved every minute of working at Triple M. The people were great, the bosses always backed me and it was the most fun I’ve ever had in radio.

Did you always have strong opinions or did they creep up on you?

Yes, I have always been certain of what I think, but have always been open to debate. The trick isn’t learning how to have an opinion, the skill is how you express it. Sometimes making a joke about something is the best way to cut something down. It’s really important to say my attitude has always been mine but it’s just one opinion, albeit strongly expressed, however, unlike many in TV or radio, I don’t think it’s the only one worth listening too.

Were you ever a leftie?

Oh God yes. At uni, I was really into humanities subjects with a post-modern twist. While my world- view has changed, uni was a great time in my life because it taught me about the power of making an argument you can back up. There’s not a right answer to many of the world’s big questions, but solutions start with passionate, informed discussion.

How would you describe your views?

Lazy people say ‘right-wing’, but that’s bullshit. I’m a Libertarian. I’m for as little government intervention as possible. I believe in real free speech – that’s the kind where you defend the stuff you don’t want to hear too. I believe in balanced budgets unless you need debt to build infrastructure. I find the idea of a country borrowing money to pay its welfare bill offensive to the very people who need the help.

How did you land the PM Live job?

I’ve known the people at Sky News for a very long time. In fact my first gig was working on the 2004 election in the tally room. In 2008 I’d just finished working on a cool little news show for Channel Seven when the call came to do some editorials on Sky News.

We did a couple during the day and that lead to a Friday night show. A couple of years later, [Sky chief] Angelo Frangopoulos offered me the chance to go full-time and I’ve had the best gig in TV ever since.

Now that sounds like a wank, but let me put it this way: I have an hour on national TV to do with what I want and the bosses back my right to say whatever I like. It’s not a blank cheque to be an idiot of course, but it’s their confidence in me that makes it a very safe and supportive place to be.

Was it what you always wanted?

I don’t look like the sort of person they put on TV so I never thought I’d be on TV but I’ve come to learn, that’s the genius of what Sky News saw in me and that’s what helps you visually stand out. From there it’s up to you to hold their attention.

Does it satisfy the crusader in you?

Since Leo died I have definitely become more of a crusader, but it’s not my whole ‘act’. His loss really cleared the way to see what matters and that life is too short to be afraid of liars and bullies who BS us every day.

What’s a typical day for PM to get ready for PM Live?

My approach to the show is a bit like my approach to obesity, constantly snacking. I stay up very late at night so to get a chance to read most of the papers online before I go to bed. In the morning we follow up and set a bit of a plan for that night’s show. Then I try to live a non-news life for a couple of hours in the middle of the day to get perspective and see what real people are talking about before going into work and getting my hands dirty in the making of the show.

Is PM Live a case of seeing wrong and trying to right it or is it a plea that common sense and fair play prevails? Or do you just want Australia become your kind of Australia?

I hate being patronised or seeing when political, media or business figures try to do it to other people. That’s when I fire up.

What is your kind of Australia?

One that’s proud of its past, protective of its future and one where your right to say NO doesn’t limit my right to say YES and vice versa.

How does Paul Murray relax on the weekends?

Apart from playing with the family and hanging with mates like everyone else. I love the movies, watching too much TV, hooking into a good steak and lighting up a big cigar.

Is anyone trying to stop your cigar smoking and coke drinking? After all, you are worth preserving, mate!

Of course and they are right and it’s pig-headed not to listen but I like it! I know it will probably kill me, but I like it! I think my attitude to health is part of a bigger self destructive risk-taking behaviour thing I’ve always had and one I don’t ever think I’ll get my head around.

I hope he does as this young bloke stands to one day be remembered as a national treasure and I have not said that about too many of my media colleagues, despite my very healthy respect for many of them!

As I say, if you miss seeing Paul Murray each week, you are a missing a lot.