The Wall Street meltdown reminded me how valuable a kick in the pants is!

I’ve always loved the inspirational advice that your “attitude determines your altitude” and it had special meaning for me this week as the Dow Jones Index’s record high readings were ripped down by the second before my very eyes!

It was Tuesday just past 7 AM and I was watching US business TV as Wall Street moved towards a 4 PM US-time close, marked by the famous ringing bell on the New York Stock Exchange. I’ve been on the floor of the NYSE on two occasions when I took my Sky News Business program to the Big Apple.

The first time I went there was in 2010 when we were trying to work out if the US economy and stock market could beat the economically depressing implications of the GFC-Crash of 2007-09.

The US Government was bailing out the biggest banks in the world, the most famous carmakers ever and the greatest insurer on the planet in IAG. Interest rates were set to zero and the fingers were crossed that this revisiting to, what economists called, Keynesian economics would stop us from doing a 1930s Great Depression rerun.

Over here in Australia our Treasurer, Wayne Swan, did a very un-Labor thing in throwing his support behind our banks, and tossed $900 cheques at battlers who went off to Harvey Norman for a big TV, while some put it through the pokies, but the trick worked and we dodged even a recession with unemployment staying below 6%. That was unbelievably good fortune, because every other Western economy did it a lot worse than us with their banks taken to the cleaners. An unbelievable number were actually bailed out by their governments.

The USA, Japan and the Eurozone got a huge kick in the pants and surprise, surprise their economies and stock markets are roaring back like never before.

Let’s look at a numerical comparison to show how a bigger kick in the pants for the USA has helped their stock market compared to Oz.

In reality, there are other reasons why our market has so underperformed the US market, but some part is the re-engineering of American lives and businesses as a consequence of the GFC’s well-placed kicks in the butt of the USA.

Some ‘bush’ sociologists think Australia has its problems because we have not seen a national recession for 26 years, and as a country we seem to be worried about issues that other countries see as small beer.

For example, our newspapers want to tell us to care about mortgage stress when home loan interest rates are at historical lows of under 4%.

We’re arguing about whether negative gearing should be preserved, and the need for a smaller capital gains tax discount, when in Spain youth unemployment at the start of 2017 was an incredible 41%! Now that’s an issue for national debate.

As a country, we need to start talking about the issues that are important but it’s not just up to politicians to set the agenda, I reckon it has to start with families and individuals having the same commitment to understanding the value of a reality check.

In the USA, the stock market, as measured by the Dow Jones Industrial Average, had risen 25% and so a correction was always going to happen. This 10% plus drop this week in the stock market gives investors a reality check and they should set their going-forward strategy accordingly.

So, what has been your ‘correction’ for this year and what new strategy are you coming up with?

Last year I was pretty unsuccessful at losing weight and so I set my New Year’s resolution in place before New Year’s Eve, as I recommended you do, and I put in place the people and the processes to bring my weight down to 83 kgs before the end of January. Christmas was a joy, and I had shot up to 89 kgs, so I had to get serious to lose 6 kgs in a month!

On January 30, I saw my goal kicked and it was clearly my new and improved attitude that determined how much I achieved in the weight-loss department. And it created a virtuous cycle as I ‘ve now decided to shoot for 81 kgs, but to commit to a weight-lifting program — success is leading to a drive for more success, the setting of new goals.

My attitude will determine how high we go and I have to say a part of this new energy has come from me reading Ray Dalio’s Principles book and my wife reading Anthony Robbins’ Awaken the Giant Within.

This story today has been inspired by a photograph taken by my son Alex of his son and my grandson — Teddy Switzer — who turns one today!

This pic of him cuddling Tony’s legendary book was so prophetic and it has made me hope that young Teddy won’t need too many kicks in the butt to awaken his giant within but I can assure you I won't be upset if he does because history has shown me just about everything in life we want is just outside our comfort zone. 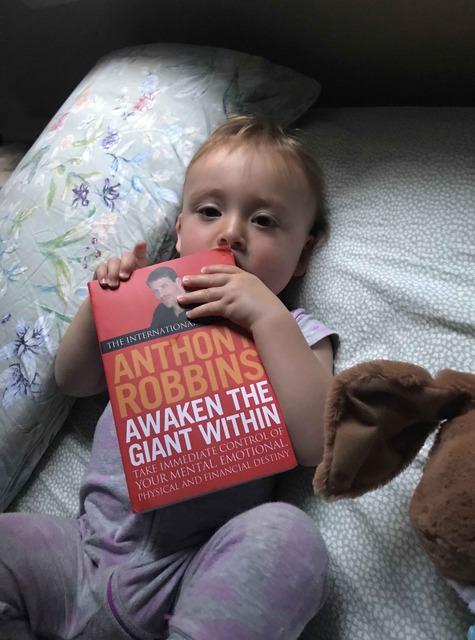 And to get out of our comfort zone we often need a well-placed kick to our rear ends.

Go Teddy! And go you — I hope you get some timely, life-uplifting kicks this year.