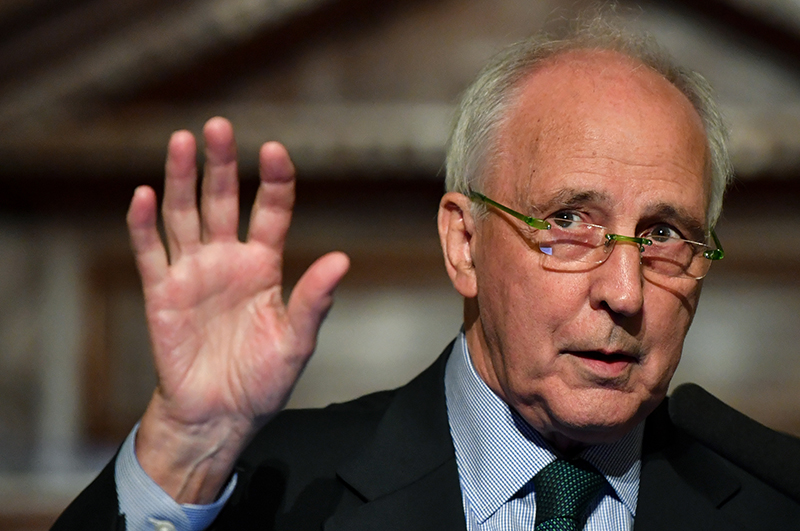 The super gospel according to Paul Keating

I always thought of myself as one of this country’s greatest advocates of superannuation, which potentially makes me one of the most boring dinner party guests in Australia. Hey, it could explain why we don’t get many dinner party invitations!

Another Aussie who might have the ‘boring super guy’ or ‘super bore’ tag is former PM Paul Keating, who branded Government MPs lobbying for killing the hike in the compulsory super slug from 9.5% to 12% as participants in a super “grand theft” incident.

I watched Keating and commented on his policy decisions on radio, TV and in newspapers from 1985 until he retired in 1996.  And most Aussies know that this guy is not boring. But his bleating about super is suggesting to me he needs to rehire his old speech writer!

He really is crapping on.

Don’t get me wrong. I know why he’s bellyaching and there are good reasons for this. But he’s thinking long-term when our problems now need some short-term good ideas.

Early this week, PK and the country’s biggest super fund, Australian Super, piled in to ‘pooh pooh’ the idea of delaying or dumping the rise in compulsory super from 9.5% to 12% by 2025.

Showing his political skills, which at times were superior to his economic knowledge, Keating pointed the finger at those damn ‘enemies of the people’ — employers!

This is what he told the SMH: “They would be not only paying no real wages and letting the companies simply pocket all the productivity, but more than that, they would actually be robbing working people of 2.5 per cent promised to them by the Parliament.”

He called this “wicked” behaviour.

This was classic Keating.

It implies that a delay or dumping would be a bonus for employers but there are those who are saying let the scheduled increase in super be paid as a higher wage, which is a good idea.

It helps consumers who are desperate for wage rise and should help bolster retail spending, which should be good for an economy that needs all the help it can get.

Australian Super’s boss, Ian Silk, wonders how all employers would transfer the super pay increases into wages but it could simply be made law, just like a minimum wage rise.

And some time down the track, when the economy is humming, that pay increase could be turned into a super payment, by law.

Don’t worry, stunts like this have been pulled off by governments before when Paul Keating turned his L-A-W tax cuts into compulsory super contributions. Yep, Labor went to an election with the ‘grand theft caller’ himself promising a tax cut and he turned it into a super payment instead.

People who voted for him and his tax cuts were told to shut up and wait until you retire to collect on his promise.

Keating is not the political messiah but he was a genius Treasurer, for a Labor man. And though he screwed up on interest rates, as most global finance ministers and central banks did in a new deregulated world, he politically reformed our economy, which partly explains why we’ve gone 28 years without a recession.

However, that does not mean he’s right on his super call. Let’s get the economy growing before we start raising saving levels via super.

One of the first shocks to me that made me interested in economics as a young student was something called the Paradox of Thrift. This defied common sense and said if we all try to save more, we’ll end up saving less!

Imagine a government-sponsored scare campaign to make us stop consuming was successful. The act of saving more out of income would mean we’d consume less, which would take demand away from the economy. Production would then fall, jobs would be cut, incomes would drop and there’d even be less consumption but also less saving!

Saving more therefore has led to less saving! I suspect turning potential wage increases into super payments would be a real world example of the Paradox of Thrift. I don’t think we need less economic growth encouragement right now. Do you?

Anyone who doesn’t know much about Paul Keating should look up some of his quotes/baggings of rivals. One colleague was the very articulate Jim McClelland, who used to challenge him on certain matters. “Just because you swallowed a fucking dictionary when you were about 15 doesn't give you the right to pour a bucket of shit over the rest of us,” Keating once said to him.

On that vein, let me say: “Paul, just because you created compulsory super in this country (and we’re so lucky that you did) doesn’t mean you’re a freaking super man with all the answers when it comes to the economy.”

And I say that with the greatest respect. If I’m in any way a little rude, let me say that Keating was a damn great teacher!

(By the way, I just bought tickets to see The Gospel According to Paul so expect a whole lot of Keating references over coming weeks!)