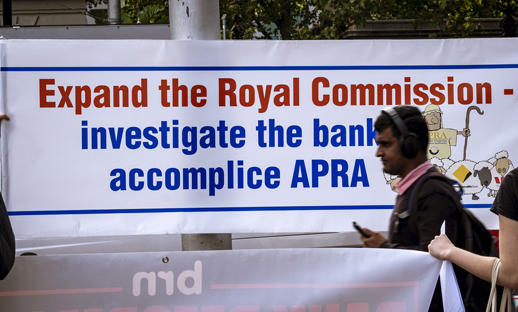 The Royal Commission is a super killing bloodsport and political pygmies are the accessories!

As bankers and other financial institution employees are dragged out for public execution in the Haynes Royal Commission, I have mixed feelings about this tragic show.

On one hand, as someone who has always questioned publicly why the banking ombudsman was so ineffectual for customers who thought they were hard done by, I know it’s high time something be done to turn the tables on those who’ve had the whip hand. The Royal Commission is doing that in spades.

However, I knew that a Royal Commission via the media exposure would be bad for bank share prices and therefore our super funds. I know this sounds so gratuitous but our super funds make us accessories before the fact!

We expected great returns and as the biggest owners of banks, collectively through our super funds, we were, in effect, our own worst enemies!

Whenever people whinged about banks on my various media outlets, I always advised: “If you want to get even with the banks, just buy their shares!” This is why I railed against the Royal Commission and warned about the hip-pocket consequences of making financial institutions play fair.

Of course, everyone should want that, and I do, but this is why I had mixed feelings about it all.

The biggest annoyance about all this is that I’ve been writing and giving out my views on major newspapers and websites since 1985, very few finance ministers or Treasurers have ever got serious about the finance sector.

Labor tried with its Future of Financial Advice and the guy who spearheaded that — Bernie Ripoll — really was the most committed pollie to fixing up financial advice that I’ve seen.

The sector is better because of his efforts but the fact that so much other bad stuff is now being revealed shows that other finance and superannuation ministers, which includes the likes of Bill Shorten and Kelly O’Dwyer (albeit well-meaning politicians) never really exerted their powers to clean up the sector.

And our super is being negatively affected, though it’s not all Royal Commission created, as there’s also a fair bit of Trump tariffs and tweeting in the market slump since March.

This week, SuperRatings.com.au looked at the recent performance of super and, short term, it’s not pretty. “Australian super fund members have suffered a second monthly decline in returns in as many months, as volatility shakes global markets and creates an environment not seen by most super members in a decade,” its press release told us.

Of course, our long-run returns are very good but if the Royal Commission keeps killing the banks, there could be a super-cost for this witch-hunt.

Banks have been under the pump for a couple of years, with the Murray Financial System Inquiry and APRA making them issue more capital. Short-sellers have been linking a housing collapse to a banks’ bad balance sheet story. And then there was the Austrac debacle for the CBA. On top of that, the handling of all these share price killing media stories by top executives has left a lot to be desired. It’s no wonder their stock prices have slumped.

And in the start of the year, it was an $81 stock, so this year’s bad news for the bank has cost it 10%. That’s a correction, and the Royal Commission is certainly correcting the bank.

But much of this could have been avoided if previous governments had looked seriously at something that people like me have always thought would have been a great idea.

The financial sector needs a dedicated consumer claims tribunal system (like the ones we see in the state government sectors), so a consumer can confront their financial supplier and have an independent assessment made about the disagreement, with no lawyers!

These cheap ‘days in court’ (which aren’t in a court and which are run by fair-minded conciliators) would have quickly solved a lot of these terrible stories of rip-offs that bred family tragedies.

Political pygmies create giant problems, like we’re seeing at the Royal Commission. Our super funds have a big exposure to financials because the financial sector takes up over 30% of our stock market. This means we have the biggest exposure to their stocks than any country in the world, apart from money hideaways like Switzerland and the Caymans!

This Royal Commission is super painful in more ways than one.