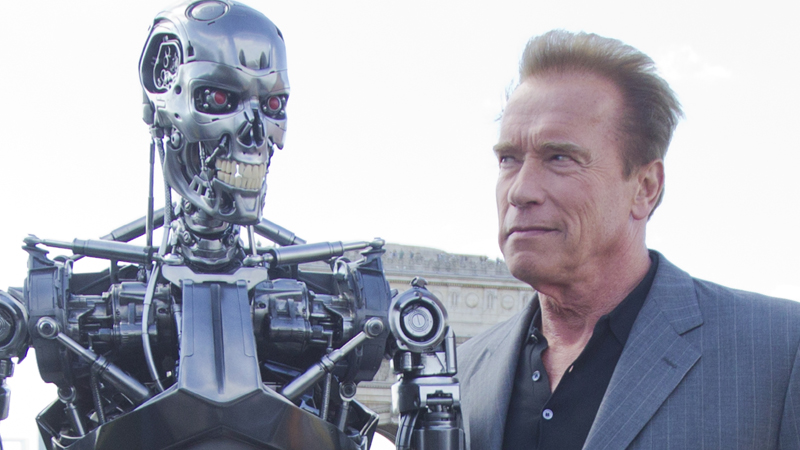 The robots are coming, outthink them!

The world is changing and western human beings are under challenge from disruptive digital entrepreneurs/businesses, artificial intelligence, robots and under-developed countries’ populations armed with smart phones! What do we do to protect our incomes and prepare ourselves, and our kids, for the world ahead?

One group of people I left out of the threats to ourselves in a changing, globalised and increasingly digital world is ourselves! Yep, we are accessories before the fact to the technology that threatens our jobs, our income and our futures. And as a supreme optimist, I don’t find it easy to write this kind of stuff but the evidence of what lies ahead makes me nervous for more fellow Aussies than ever before.

Right now, drones and driverless cars threaten delivery people. Amazon hovers over retailers, such that two great businesses — JB Hi-Fi and Harvey Norman — have been beaten up on the stock market over the past four months because of the perceived impact of Amazon.

Uber has changed the taxi industry forever and Airbnb is telling the hotel and accommodation industry that revenues and customers will never be the same because there’s a new and a very big kid in town.

Free-to-air TV is clobbered by digital advertising on websites, by the younger generation that gets their media very differently from their parents and by the likes of Netflix. Eyeballs are being led away from the likes of TV behemoths (such as Nine and Seven), while newspaper groups such as Fairfax have become less valuable than their real estate website — Domain!

Department stores like Myer, Macy's and Nordstrom, even in the shop-til-you drop USA malls, look to be on death row, or at least on permanent life support. This week, the Aussie division of UK’s Top Shop went into voluntary administration, and this comes as companies like Surfstitch went into a trading halt as it faces a $100 million class action from very cranky shareholders!

Meanwhile, fine dining restaurants are giving way to bistros and tapas bars, while airlines (such as Cathay Pacific) are struggling and cutting staff like never before.

This is what economists call structural change. It has happened here before but never so spectacularly, and never with so many occupations and industries set for so much upheaval.

Of course, like a lot of Aussies, the galah might have been talking about this reform of over-protected industries that needed to reinvent themselves — at a micro-level — as internationally competitive operators but they didn’t understand what would happen to their lives as a consequence. Anyone who worked in the textile, clothing and footwear industries, the printing game, the car-making business and so on has come to understand it, as there is a very real social consequence when the structures of an economy are either changed by new government policies or a changing world that brings online rivals.

Quite appropriately, the big online life and business game changers are Facebook, Amazon, Netflix and Google. In recent times, they have been nicknamed the FANG group. And boy, haven’t they been biting the businesses in their way!

But it’s not just existing businesses and people’s way of life under threat. It’s also profits. And, in part, it would explain why business investment is subdued right now. In part it also explains why wage rises are subdued.

How could you expect a boss to risk more money invested in a department store or hotel when he or she doesn’t know how the future will play out? And if prices are being beaten down by digital-driven discounting, as new age Internet businesses always compete on price, then how could bosses raise wages?

Only businesses unthreatened by the new world, or redefining themselves as unique, have the power to raise prices and pay higher wages. And these are the industries and businesses that you and your offspring should be thinking about to protect your/their income and lifestyle going into the future.

Many occupations are under threat. Many of us will be surprised who the experts think could be at risk.

A story in The Guardian told us: “Two-thirds of Americans believe robots will soon perform most of the work done by humans but 80% also believe their jobs will be unaffected.”

In New York, a McDonald’s outlet has a “Create Your Taste” kiosk, which has KO’d a pile of jobs.

The Guardian says that “experts now predict that a tipping point in robotic deployments is imminent – and that much of the developed world simply isn’t prepared for such a radical transition.”

The report even pointed to an Aussie company — Fastbrick Robotics — which has developed a robot that can lay 1,000 standard bricks in one hour, making it equal to two brickies!

The World Economic Forum calculated five million jobs would go in 15 countries by 2020 because of robots. But it might be worse than that.

“The International Labor Organization states that as many as 137m workers across Cambodia, Indonesia, the Philippines, Thailand and Vietnam – approximately 56% of the total workforce of those countries – are at risk of displacement by robots, particularly workers in the garment manufacturing industry,” The Guardian revealed.

In 2016, a McKinsey report found: “Last year, we showed that currently demonstrated technologies could automate 45% of the activities people are paid to perform and that about 60% of all occupations could see 30% or more of their constituent activities automated, again with technologies available today.”

And while factory jobs are at risk, so are white collar activities.

“The jobs of bookkeepers, accountants, and auditing clerks, for example, require skills and training, so they are scarcer than basic cooks,” the report explained. “But the activities they perform cost less to automate, requiring mostly software and a basic computer.”

The report says the more you are involved in managing others, applying expertise, involved in stakeholder interaction and unpredictable physical work, the safer your job will be from robots.

So what’s the lesson here?

We need to work on our uniqueness and our indispensability to ensure we beat off those pesky robots that want our jobs!

That said, as consumers, we can’t ignore what we can do to slow down the march of the robots.

Our love of lower prices is feeding the success of businesses, such as Amazon and Uber, that do not pursue profits like a normal business. Their size permits them to build revenue by foregoing profits, which then kills off opposition — you know, old-fashioned businesses with real people.

The problem of succumbing to the digital-disrupting age is that we could be doing ourselves out of a job and/or creating lower wages, as we have to compete with low income workers in poorer companies, who now can do work on smartphones like never before. And then, of course, there are damn robots with their artificial intelligence.

So the obvious defence or maybe attack strategy is to build up your natural intelligence because naturally intelligent people will always be in demand!

Someone with natural intelligence, Hamish Douglass — a cofounder of the Magellan Financial Group, which manages more than $37 billion — thinks the ride-hailing service Uber has a less than 1% chance of surviving the next decade, Business Insider reported this week.

"It's constantly losing money, and its capital-raising strategy is a ponzi scheme," Douglass, told a stockbrokers’ and financial advisers’ conference this week.

Let’s hope, for the sake of humans and normal businesses, he’s on the money.