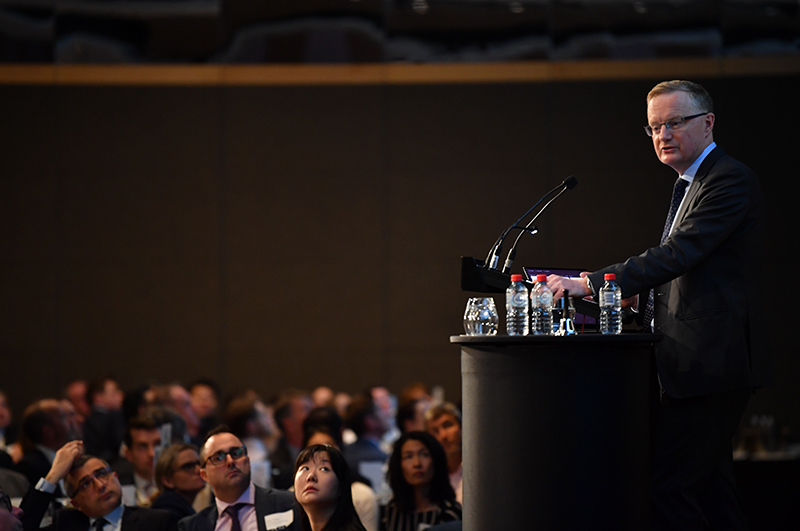 If the Reserve Bank Governor, Dr Phil Lowe, is braindead, the financial markets are paying a 24-carat gold nincompoop a lot of respect. The guy uttered a few words yesterday and the stock market went up and the dollar dropped. But I guess it’s possible that the majority of economists, financial product professionals and high-end smartie pants investment bankers could be braindead as well.

The AFR put together a long piece on how communicative Dr Phil is compared to his predecessors. And amongst the economist fraternity, he’s seen as a pretty smart guy. But in my interview with Dr Steve Keen this week, he bluntly called the RBA “braindead”, which clearly implies Dr Phil is a dope on Steve’s assessment.

Why? Well, Steve thinks our central bank governor doesn’t worry or even care about our internationally high household debt and his interest rate cuts will only fuel another house price spike and set us up for a huge real estate Armageddon.

On the other hand, many respected economists think Steve’s a dope and has been consistently wrong on house prices and will continue to be so. Only time will tell. I can’t subscribe to the view that either men are braindead, though they do see the economic world very differently.

Economists and those who debate economics, do so with passion. They advance their argument as though everything is so bleedingly obvious. But just like the collective humanity that economics tries to explain, economics itself isn’t straightforward.

I’ve seen the smartest economists make big calls about recessions, stock market crashes and booms and be wildly wrong. And it’s not because they’re dopes. It’s because an economy and what the decision-makers (consumers, business leaders and politicians inside an economy do) can defy logic.

That’s why J.M.Keynes, whose economics helped us dodge a Great Depression in 2008, once observed that ““The market can stay irrational longer than you can stay solvent.”

Meanwhile, what Dr Phil has to do and what Steve Keen thinks he should do, are two horses of a different colour. Keen wants action to reduce the household debt-to-GDP ratio. That would mean the RBA should not cut rates and risk getting people to borrow more and thereby increase the debt.

As RBA Governor, Dr Phil is supposed to keep inflation in a 2-3% band and work to get unemployment down. That’s his job. So imagine if he told us, the business community and Scott Morrison that he would not cut rates because he’s afraid of our debt levels!

I reckon ScoMo would do a Trump and effectively put him in a headlock in the court of public opinion for risking a big rise in unemployment. It reminds me of the GFC when some well-meaning but unrealistic types argued against the handouts to Australians. “In the September and December quarters of 2008, the cash payouts to pensioners and low-income families saw government consumption contribute strongly to GDP growth at a time when household spending was falling. Throughout 2009, the $12.7bn given to all families (the cash splash) saw household consumption contribute very strongly to growth,” wrote Greg Jericho of The Guardian.

At the time, I used the argument that these handouts could be compared to mouth-to-mouth resuscitation for a very fat guy who’d had a heart attack at the MCG during a grand final, while some well-meaning modern men were calling out: “Put him on a low-fat diet!” If he survived the attack, that’s the long-run solution.

Even if Lowe really agreed with Steve about the unmanageability of the household debt, the reform process is too drastic for a central banker and the politicians (who effectively rules him) to publicly put in place.

Dr Phil and Treasury would be hoping that economic growth, a falling dollar, government spending and tax cuts will make the process of adjustment possible, even if it will be a long and drawn out story.

One thing’s for sure (and Steve Keen admits this): lower rates, tax cuts and a lower dollar could make his 40% house price calls, once again, a slow train not coming for some time. Professor Keen and his supporters will be left with the ominous warning that the day of reckoning is near but it could be years before that comes close to happening.

And that effectively is Dr Phil’s job — get growth happening to create jobs and maybe push up inflation and wages but this could reduce the household debt-to-GDP ratio by pumping up GDP growth. It has happened in a small number of cases worldwide and maybe a post-Trump trade war truce boom could do the trick.

An economy can remain buoyant longer than doomsday merchants’ predictions seem credible but it’s not always the case, I’ll concede.

In Dr Phil’s speech at the Anika Foundation get-together to business economists who don’t think he’s braindead, the Governor said the outlook remains reasonable for the Australian economy, with the tax cuts, lower interest rates and a pick-up in resource sector investment set to help. “And I'm hoping after a very large adjustment in the Australian housing market that process has run its course and that will give people a bit more confidence to spend,” he said. But he doesn’t expect the house price boom to resume, which will be another test for his heavily criticized grey matter.

He’s very concerned about the trade war and how it has rattled business confidence. “And when businesses are nervous, they don't want to invest. Their option value of waiting goes up and so businesses sit on their hands.”

His solution? “The best outcome here is to remove that uncertainty. But at the moment, I don't know”. This is really code for “it’s in Donald’s hands and he’s too hard to read, even for a brainy central banker!” (My words not Phil’s)

Unlike Steve and his followers, I don’t doubt mainstream economics but I remain respectful of those who fear our household debt-to-GDP ratio. However, the great Max Walsh taught me as a young business commentator that the “muddle through” thesis often trumps the Armageddon scenario.

Depressions happened in 1837, 1873-1896 (that was a long depression!) and 1930s but how long is it since we’ve had a Great Depression? Could it be because ‘braindead’ economists, central bankers and Treasury officials have learnt how to delay or even defeat recessions turning into depressions?

Only time will tell but I can’t ignore the fact that debt explosions and real estate booms have generally gone before depressions! It’s why I don’t dismiss Steve Keen as braindead.