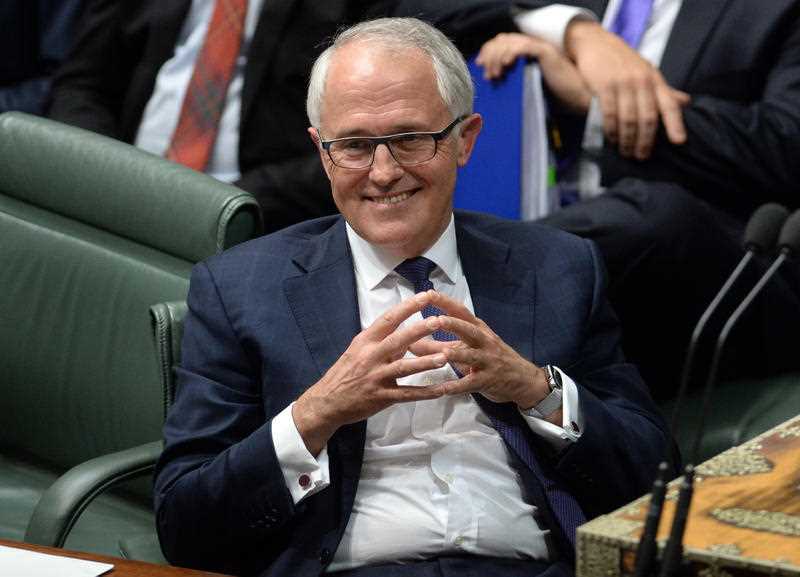 The Malcolm Turnbull rally is one day late

The Malcolm Turnbull rally is set to come one day late with a strong showing on Wall Street. The Dow Jones index was up over 250 points at one stage, and closed up 228.9 points, ahead of the all-important Fed decision on interest rates on Thursday, US time.

Of course, this stock market surge is all Fed-related but it’s bound to keep things positive here for the All Ords, and gee, wouldn’t Malcolm have loved a strong stocks day to welcome him to the top job? But it’s not all about Malcolm and that’s why I’m slightly disappointed that we didn’t have a great day for stocks yesterday.

You see, the switch from Tony Abbott to Malcolm Turnbull can be seen as being related to a lot of things. It should help the Coalition reverse the 30 Newspolls that have been good news for Labor and Bill Shorten but there’s something more important and Malcolm underlined it before the vital vote was taken on Monday.

He kept telling us that confidence has been the victim of what has gone on since Tony Abbott became Prime Minister. I made this point on Monday in this column and showed charts of both business and consumer confidence to prove it.

I also said I thought the economy was turning around and the last Budget, the record low interest rates, and the falling Oz dollar were behind the improvement I expect to see in 2016.

However, a missing part of the delayed economic comeback puzzle has been confidence.
Some part has to be the big fall of the local stock market from where it nearly hit 6000 on the S&P/ASX 200 but is now at 5018. That’s a 16% fall! That will make even optimistic Aussies cautious.

And then there has been the Greek drama that spooked economists, currencies and stock markets. This related fear was put on steroids by recent China economic and stock market shocks and then there’s the Fed hovering over everything with the possible first interest rate rise since the GFC.

This stock market surge since the 2008 crash has been created by low interest rates so there’s an expectation that when rates start going up, the stock market could drop another leg down. However, it could be argued that it has already happened in advance of the big decision so it could be a case of “sell-the-rumour and buy-the-fact”. Today’s Wall Street spike could be pre-empting a rally when the Fed decides!

Yep, instead of falling with a rate rise, US stocks could surge because there has already been a big sell off and the decision to raise rates could come as a relief and a confirmation that the Fed thinks the US economy is really good enough to cop a rise.

On the other hand, it could be that market smarties think the Fed will hold fire so they’re buying on that assumption. Both views are valid but I prefer the first one.

The above reasons explain why Aussies are lacking confidence for external causes but locally, we have a slower than wanted growing economy, the mining boom is petering out, wages growth is low and confidence readings are also not helping confidence, like a non-virtuous circle.

But wait, there’s more. I’ve always argued that my mates in the media have made too much out of negative news and have downplayed or ignored good news. The previous government started their regime talking too much about debt and deficits, with their first Budget adding to negativity. The crazy Senate didn’t help either but in the end, confidence is down to government.

All the above didn’t help economic growth, tax collections, unemployment and therefore government outlays on things such as the dole.

Talking too much about debt and deficits actually worsened the debt and the deficit! We needed growth to reduce the deficit and then the debt and that’s why this year Joe Hockey has been talking small business tax concessions, jobs and growth.

But wait, there’s one thing more — the Abbott haters have indirectly hated our economy as the continual criticism of the nation’s leader, who he is, what he stands for and his shortcomings bothers some businesses, consumers and voters.

The alternative is a national government that everyone respects, believes in and which makes decisions that the media largely gives positive support to. This builds up national confidence.
This is what Malcolm was and is alluding to and you have to hope for the sake of the economy, the unemployed and for confidence levels it actually happens.

I have always argued that Fairfax and the ABC were unfair on Abbott just as News really gave Gillard a hard time. That said, Abbott and Gillard’s performance also contributed to their unfair bollocking.

This is why I wanted to see a Turnbull victory. I want to see our Aussie economy given a chance to really make a big comeback. I think 2016 will be better for the economy and so does the Reserve Bank, so it’s not just a too optimistic Switzer thing. The two chartists on my TV show say the squiggly lines on the charts they showed on the show point to the resumption of the bull market trend in coming months, if not earlier.

If the confidence deadweight that has been hurting growth can be partly taken away because the media is fairer to Malcolm compared to Tony, then the latter’s sacrifice has not been a waste.

There has to be a confidence and then a growth dividend from the turn to Turnbull or else this was not only a waste of time, it has also been bloody unfair!

I’m hoping for a one-day-late Malcolm market rally and I’m praying we get a run of positive developments in coming months to ensure 2016 will be good for the new PM and the rest of us. Of course, today’s rally won’t really be a Malcolm rally but it would’ve been nice to see it yesterday because some commentators might have said it was a  reaction to a new PM.  And that might have been one mistake I would’ve ignored for the sake of the economy. I’m that kind of guy.

P.S. When I was 21, I was Malcolm’s patrol captain at North Bondi Surf Club and even then, he looked like the guy who could be PM. And also many years ago at the UNSW, coincidentally, I taught the guy who is expected to be our new Treasurer — Scott Morrison — so I know he understands economics, which is a good thing for the country’s top number cruncher!