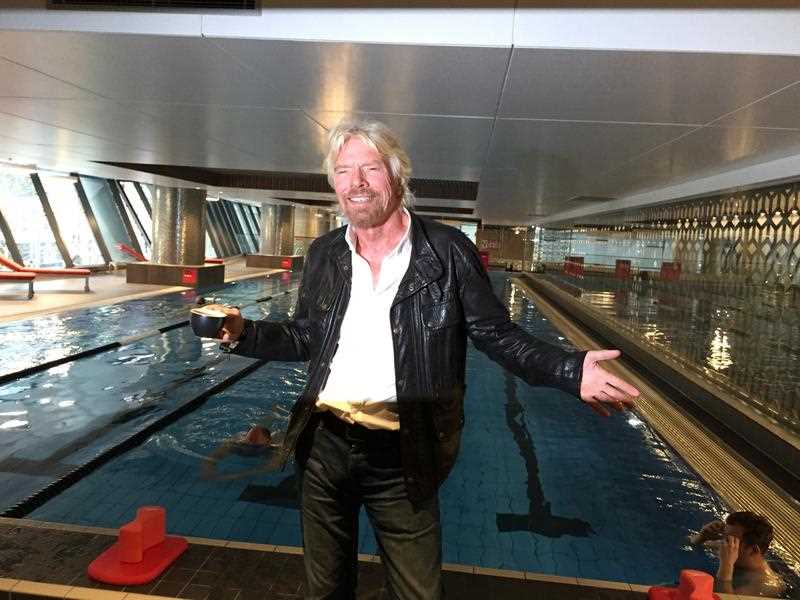 The economic case for Abbott to learn from Richard Branson

It’s five days out from the Canning by-election in WA and this could well be named the bye-bye election for our Prime Minister Tony Abbott. If the political pundits are right that Malcolm Turnbull is poised to challenge, then we have to ask the question — what’s wrong with our leaders nowadays?

Let’s face it, we’ve had three virtual failures in a row in Kevin Rudd, Julia Gillard and now, if the polls are right, then Tony Abbott could be disposed of into the dustbin of political losers.

Rudd was dumped by his own party. Gillard became PM via independents and not the majority of voters and then was dumped by her party and now the man, who promised so much, looks to be on death row, if you can believe the political experts.

One Abbott supporter asked me recently what hasn’t Abbott done in relation to his pre-election promises? My friend said: “He’s stopped the boats, killed the mining tax and the carbon tax, so what’s the beef?”

All true but the polls show Australians want more. He did say Australia was “now open for business” in his election winning speech and the free trade agreements are consistent with that. However, business confidence has struggled under the Abbott Government but I will say business conditions spiked in August from 6 to nearly 11, which says businesses are starting to feel good about their operations right now. It’s progress but it has been two years in the making. Interestingly, New South Wales, which is led by the “boy wonder” Mike Baird, has seen its NAB business conditions reading go from 9 to 22, which is huge!

And while I know the improving economy and housing boom have been a big help for Baird, his positive leadership has helped as well. No one hates Baird. He comes up with gutsy decisions but can look like a real person when he has to, with his positive Syrian refugee response  a classic case in point.

Meanwhile, Tony has been struggling to connect to the population generally, with his Prince Phillip knighthood standing out as a beacon for how disconnected he is on a public level. One-to-one, Abbott is very personable — I’ve experienced it — but he has difficulty pulling this off publicly.

He looks stiff, defensive and uncomfortable while his mode of communication does not generate confidence that this guy is on top of his game and will lead us where we want to go.

In simple terms, Tony could sell his messages about the boats and taxes but he can’t sell other stuff that Aussies want.

Contrast him with that poor excuse for a politician, Donald Trump, who a whole pile of Americans are currently in love with. He is a masterful seller and can bring people along on his journey but we can only hope that a majority of Yanks will be able to recognise that he has the sizzle but when you get to the sausage — it’s sausage mince and not fillet steak!

So if Tony could sell like Donald, he would be in a better position but he still has to have something great to sell and that’s where our PM is struggling.

This week I interviewed Richard Branson, arguably one of the greatest entrepreneurs of all time. He’s not an excessively confident guy. He suffered from dyslexia as a child and it looks like this has made him a great listener, thinker and recruiter of great people.

Despite his communication weaknesses, it’s difficult not to be inspired by his ideas, his innovations, his commitment to social responsibility and his spectacular achievements!

One quote that sums up his approach to life and business goes like this: “Business opportunities are like buses, there’s always another one coming.”

I asked him last week how important fun is in business and for great people achieving success, and he insisted it was crucial.

I’ve tried to work out what Tony Abbott — our leader — has missing in his messages to us, followers, and Branson might have given me the clue.

In the past Branson has explained that: “Entrepreneurial business favours the open mind. It favours people whose optimism drives them to prepare for many possible futures, pretty much purely for the joy of doing so.”

The Abbott message is not optimistic but it could be. He has stopped the boats and less people are drowning. He has backed 12,000 Syrian refugees coming here and while it made it a good week for him, it came like dragging a tooth out, and then there was the Peter Dutton gaffe.

The Free Trade Agreement is a plus for our economic future and Trade Minister Andrew Robb has been good at leveraging credibility off it, but the PM is fighting a battle on whether he is killing Australian jobs.

Abbott’s best defence is that the unions said all this when Paul Keating was tearing down tariff walls in the late 1980s and we’ve had 25 years of continuous economic growth since.

Labor should be seen as negative dinosaurs and Abbott should be a positive leader showing us the way for a better economic future, but he hasn’t been good at telling this story.

He started with debt and deficit fear talk when he became PM and scared the pants of consumers and business — it was a mistake and I told them that before the 2014 Budget because I could see the economy was slowing and a tough and a tough-talking Budget wasn’t timely.

American Dr. Wayne Dyer wrote a great book called You’ll See It When You Believe It and I think this is where the PM has to do some work and fast.

We will see the “it” he stands for and either like him or respect him when he can make us believe in that “it”.

Entrepreneurs like Branson make you positive, optimistic and hopeful. Once people knew I was interviewing him, others wanted me to help them get to him. It was crazy but it shows that we want to hang out with great leaders, we want to buy into their dreams and we want to learn from them. 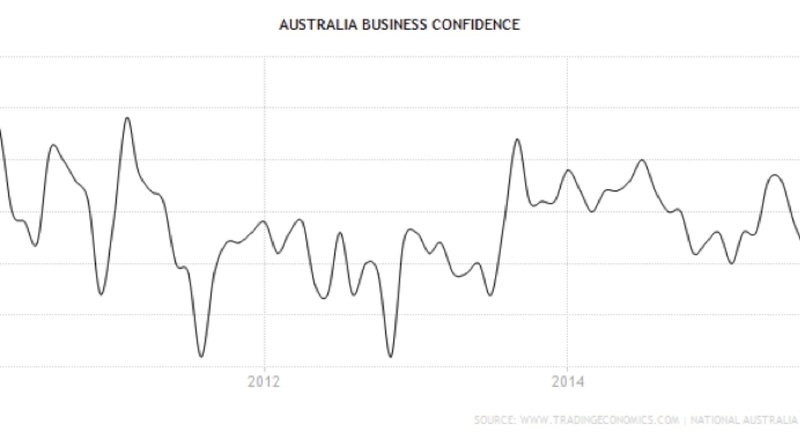 The chart shows how the Abbott Government hasn’t turned around business confidence. It rose strongly on the election win — see the spike just before 2014. Now draw a line from there to the last reading and it’s a line pointing downhill, which partly explains why Tony is in trouble.
The chart for consumer confidence tells the same story. 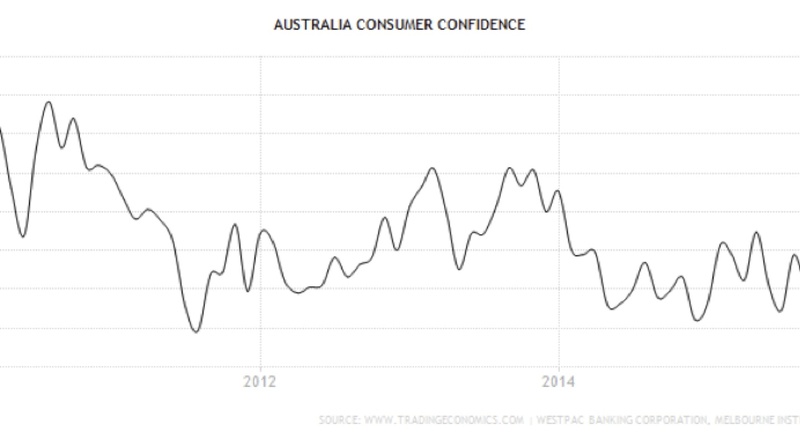 The leader of a country can learn a lot from the likes of Steve Jobs and what he built into his Apple brand. First he had a “relentless and passionate commitment to what customers want” and this is what he said of his creation: “Our brand is the embodiment of trust.”

That’s what Tony (or our next leader) has to become or he’ll continue to be on shaky political foundations, and our economy and what it delivers to business and consumers, won’t create confidence either.

If the PM survives Canning, he really has to change and fast or else Bill Shorten and his wife will be the next to remodel The Lodge!