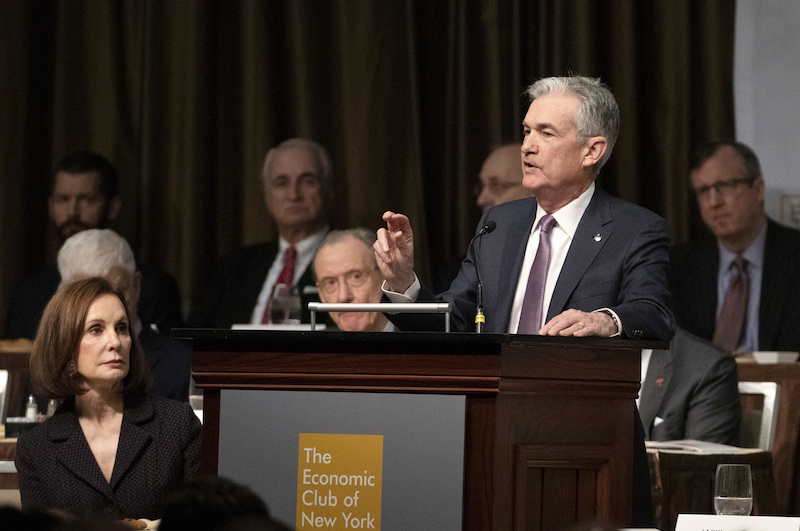 Stocks surge on a non-mad man! Will other mad men ruin things?

Stocks surged overnight because one important guy, Fed boss Jerome Powell, got it right. Now it’s up to the other guy, President Donald Trump, at the G20 meeting over the weekend to complete the double with a trade deal with China’s main man, President Xi Jinping.

Gee it looks like a man’s world, doesn’t it? I know it’s changing, and it’s about time, but when it comes to the big money decisions in the world right now the unfairer sex (is that the opposite of the fairer sex?) are calling the shots.

With the Dow Jones index up over 500 points, with a little over than an hour to go, you can see the stock market wants to go higher but a few really big issues have to get sorted. They are:

• The Fed needs to indicate that interest rates won’t rise too quickly and that was the message the US got last night.

• There’ll be a Trump-Xi deal on tariffs and fairer trade for the US relative to China. That will be discussed at a cosy dinner in Buenos Aires, Argentina, on Saturday night! (Can you imagine the Argentinian steak these two guys will consume?)

• The Brexit deal has to get a parliamentary ‘yes’ or else the UK could be thrown into recession!

• China needs to show its recent slowdown is short-term and a steady pace of growth is likely.

I can name more, such as Italy needs to play budget ball with the EU, but this is a lower order issue right now. But like Grexit, an It-exit would spook global financial markets.

On the man/woman count, two important players in the above scenarios are the UK Prime Minister, Theresa May (who could lose her gig in a bad world for PMs nowadays) and the IMF’s Christine Lagarde, whose position looks assured, given the outlook for the global economy.

That said, a trade deal knocked up over the weekend would stop people like me using the headline on Monday that might go: “Don’t cry for our markets, Argentina!”

A great agreement/solution to these trade tantrums we’ve endured since early this year will push local stocks up, like the Powell utterances will do for our share market today.

The Fed Chairman told the markets that he thought his official interest rate was close to neutral and that was the message that told investors that he would be in no rush to push rates higher. Well done, Jerome! You ‘is’ the man!

It has been a battle between the trade war and the threat of rising US interest rates to understand what mostly was scaring the big influencers of the direction of stocks on Wall Street, which in turn has a big bearing on other stock markets, as we see nearly every day.

We might get to see the answer about what the market was most worried about next Monday, if Donald and Xi lock arms, in a manly way of course, and come up with a fair trade deal that both helps the USA and China. These charts will show you why Xi needs a deal.

That Chinese stock market has fallen 26% this year. If that was us, we’d be calling it a crash and we’d be talking about a bear market. Donald Trump knows this but he has to use his best negotiation techniques with Xi, as he is a man who runs the second biggest economy in the world, heading to become the biggest.

With all that understood, it should be pointed out that Donald, though he won’t admit it, needs a deal for Wall Street to head higher to ensure that increasingly gloomier forecasts of slowing US economic growth next year (and possibly a recession in 2020) doesn’t show up. This unpleasant sounding script would not be great for a President who just copped a relatively negative mid-term election result and faces a new election in the year experts think a recession shows up!

Throw into the mix that the Poms vote on December 11 on Ms May’s Brexit deal, which hasn’t got a lot of UK pollies doing handstands in joy, and we have another reason to have market anxiety. If Grexit can worry world markets, why wouldn’t a suggestion from the Bank of England Governor, Mark Carney, who said a ‘no’ to the Brexit deal could throw the UK into recession?

The BBC summed up what a bad Brexit would do:

“Scenarios drawn up by the Bank of England show that GDP would fall by 8% in 2019, against its current forecast. Growth would quickly resume and the economy would expand again by the end of 2023 but be smaller than where it was before. Unemployment would rise to 7.5%, house prices fall by 30% and commercial property prices collapse by 48%. Interest rates would reach 4%.”

Sure, this drama for the world of money is driven by a woman in the UK’s PM May but it’s a tribe of blokes who are causing her grief over the Brexit deal.

The world of money remains in the hands of ‘potentially’ mad men. I hope they tap into their more sane resources and help our stock market get out of its current malaise.

If all these market tests can avoid failure and we finally get the Hayne Royal Commission recommendations and the Government and Labor tell us how they’ll punish our financial businesses, then I reckon we could see stocks have a nice move higher over 2019.

Men might have a lot of explaining to do, if my optimistic wishes for our stock market don’t come to fruition!