Rethinking a very negative view can result in strange market reactions, so I hope thatâ€™s what weâ€™re seeing right now.

The US Federal Reserve did nothing on interest rates and the Dow Jones index went from positive to negative, despite oil prices remaining elevated, around $US32 a barrel. This response looks a little loopy and was similar to what happened to our stock market yesterday, when higher oil prices helped most Asian stock markets but not ours!

Now that was loopy, especially when Woodside lost 1.63% and Santos dropped 2.7%!

Loopiness can be a good sign because it can suggest that what was thought since 2016 started (ie. that things look really worrying and hence the sell off) might need a rethink.

Rethinking a very negative view (just like rethinking a positive view) can result in strange market reactions, so I hope that’s what we’re seeing right now.

When you review what the Fed said and implied, it either means that it’s not as worried as many stock players think about the falling oil price and stock market response or it means that the Fed is made up of a team of dopes!

Personally I’m running with the non-nincompoop line on the Fed, instead betting that the current market assessment is too negative. Last night was my first night back in the Switzer seat on my Sky News Money TV show and economists Craig James of CommSec and BIS Shrapnel’s Dr. Frank Gelber both had relatively positive views on our economy and the global outlook. In varying degrees, they’re in the “market reaction has been too negative” camp. I think we’re seeing a bit of that today, with the Fed not showing it’s as worried about the hedge funds and short sellers when it comes to stocks.

Looking at the Fed’s communiqué, there was no clear sign that it’s changing course, so those who think there might be only one rate rise this year could be disappointed. However, that should be seen as a good thing — the Fed looks more bullish on the US economy than the market.

Of course, if they’re proved wrong, they can reduce the number of planned rate rises. That’s exactly what they’d do but market players need to respond to stimulus, such as this Fed decision so today’s reaction has been to sell first and think later.

This is how CNBC summed up the central bank statement: “… economic growth is slow, labor conditions are improving and the persistently low level of inflation would change. Fed officials maintained their belief that the ongoing plunge in energy prices is merely "transitory" and will pass in the medium term.”

I like that and it’s consistent with oil experts I respect, who see a bounce this year, though I have to say these are still speculative guesses. I did get excited about talk yesterday that OPEC and Russia could be close to an oil supply agreement that could arrest the recent falls in the oil price. However, I’ll believe that when I see it, though it makes sense that good sense has to prevail some time.

Sure, stock market indexes fell after the Fed decision but imagine if the central bank had said they’re concerned about the oil price and the big sell off of stocks! How would the market have reacted? OK, the view would’ve been that rates won’t rise in the first instance but in the second, the conclusion would have to be that QE wasn’t working. The US economy would be faltering and in the worst case, recession scenarios suggested by the recent slump in stock markets would be a distinct possibility!

Now that would’ve been a reason for a real sell-off. That’s why I prefer to say that we’re in a loopy phase for the stock market, which hopefully will give way to more rational responses to improving economic and company earnings data.

Not long ago, oil was 21% lower at $US26 a barrel and China was expected to grow slower than the 6.8% rate we saw recently. The negative views have been proven to be too negative so I expect to see some positive retracement of stocks. So does Shane Oliver of AMP, with the graph below explaining why. 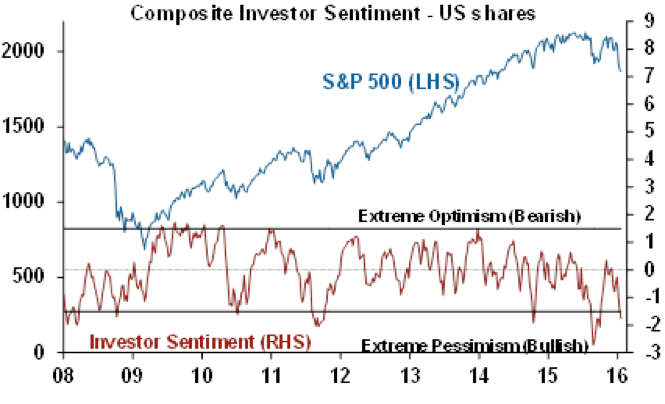 This is what Shane sees in this chart: “Signs of extreme pessimism and investor capitulation are continuing to build, with our investor sentiment index on US shares nearing levels associated with bounces.”

He sent this late last week and a bounce happened on Monday but a bit of it was taken back yesterday, after big rises on other markets on our Australia Day! I thought we followed Wall Street, which had a nice rise on Tuesday, so with a rising oil price, we should’ve gone higher but we didn’t!

As I said earlier, these are loopy times but they don’t worry me that much!

By the way, this is Shane’s longer view on stocks: “Our high level view remains that if there is to be a US/global recession, then share markets have much further to fall, for example, another 20% plus, but if recession is avoided and global growth continues to muddle along around 3% pa, then further downside in markets is likely to be limited and they are likely to stage a decent recovery by year end.”