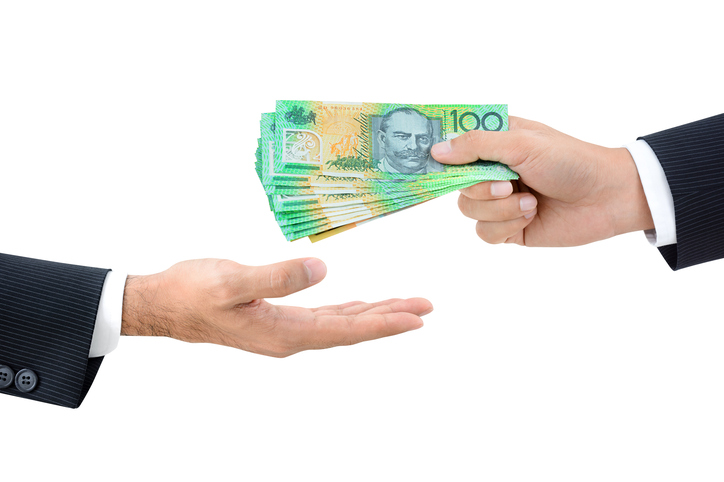 Slow wages growth won't be here forever so buck up

In 1952, Norman Vincent Peale wrote a book called The Power of Positive Thinking that was on the New York Times best seller list for 186 weeks, sold over five million copies and is still popular today. And it has given birth to a virtual army of positivists — from professional personal services providers like psychologists to amateurs — who use it to help themselves, their business, their sporting team and their family.

So what does a positive person do with the dual problem of slow wages growth? This question came to me after seeing the headline: “ANZ Bank's Shayne Elliott sounds warning on low wage growth!”

That’s my explanation point but given the tragedy of the news, if it’s right, it deserves an exclamation point! (That did too.)

To answer my question, I looked at what Shayne actually said to see if it was the power of negative thinking that brought the interpretation from the scribe in question. This is a power that affects a lot of journalists but it’s not necessarily a valid or valuable power for those who go along for a negative ride.

Shayne worries about low wages growth with high credit or loan growth and what might happen, as rates rise and mortgage stress is one likely outcome.

However, that’s only one worry and I’d say Shayne would also be worried about how his bank makes money if wages growth is slow. It will affect his share price and it could be bad news for the overall economy, if something like another mining boom comes along.

That said, something could come along, such as a global economic boom driven by technological advances, infrastructure spending and lower taxes worldwide. And it could bring with it higher wages.

The chart below shows loan or credit growth, which Shayne is genuinely and rightfully worried about, but it has been bad before without Armageddon consequences. 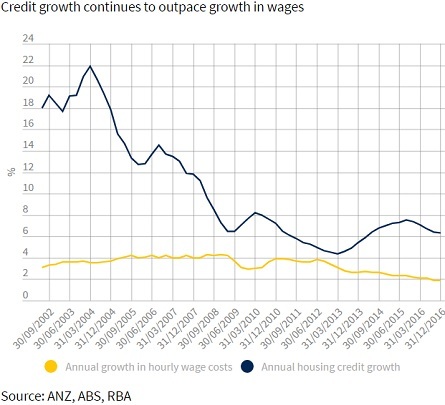 There are a lot of doomsday merchants out there warning about when interest rates rise that there could be a spike in bad debts and mortgage stress. However, right now, even these prophets can’t see rates rising this year. Some think it could be well into 2018 before rates rise. That was the conclusion by many after the RBA’s statement yesterday, when it left the official cash rate on hold again!

I can’t see the value of worrying about a wage and interest rate future you can hardly change. If anyone in Sydney or Melbourne is in potential debt danger, they could sell now. It’s a great time to do so but so long as our economy does well, there’s less reason to stress out with the negative nervous Nellies.

I would worry if I thought the Oz economy was a certainty to go south and bring high unemployment. But, even News Corp’s business and economics commentator, Terry McCrann, who doesn’t do positivity lightly, told me last night that he’s more positive on our economic future across 2017-18. Watch the interview here.

Don’t worry, one day the economy will go gangbusters and wages will rise for those not threatened by the age of Uber, Airbnb, Amazon, Artificial Intelligence, et al. And you know that with the next scary, negative issues we’ll get headlines about rising inflation and interest rates!

Then it will be a stock market crash and a recession. All these things happen in the economic cycle and in a thing called life!

I started writing in newspapers analysing the economy, business and markets since 1985. The market crash of 1987 and recession of 1990 were life-learning experiences, let alone economic enlightening experiences. One thing I’ve learnt is that there are too many ‘experts’ who predict economic problems and huge disasters and they have been terribly wrong.

Australia has gone over 25 years without a recession, which has made monkeys out of so many of these experts. Clearly, they’ve had a life of being fed a hell of a lot of peanuts!