We need to talk about what this drop really means.

Should you stress out about the biggest house price drop in 6.5 years?

The media’s obsessive love affair with telling horrific housing stories continues this morning and this time I blame economists, who had the temerity to tell the truth about the fastest fall in house prices in six and a half years! Yep, a fact like that deserves an exclamation point but in the pursuit of honesty and providing my fellow Australians with the facts of the matter, you need to look at what that drop really means.

Until the story was nearly two-thirds completed, the newspaper story I read left out what I’m going to tell you now. Maybe if the writer did what I’m going to do now, that is, reveal the facts, then maybe he wouldn’t have created the scare factor and then got a top headline for his yarn.

Take these facts in to hose down your property worries:

• The actual fastest drop in house prices in six and a half years was, wait for it, 0.6%!

• This demonstrates how many endless months we’ve had house prices rises for!

• The predicted fall in house prices in Sydney and Melbourne is 10% over two years, which would be 5% per annum, which hardly looks like Nightmare on Elm Street.

• House prices in Sydney and Melbourne have risen by varying amounts over the past five years. The story today says 45% but others have said 75%. However, if I found a $1 million home too expensive at auction last year, if the price falls by 5% to $950,000, I reckon I’d still find this price pretty challenging.

I could go on, but I think I’ve put these housing horrors into perspective. What worries me is that headlines like this, on top of the plans Labor has to nuke the property market for investors next year if it wins the federal election, could actually turn this property correction into something more scary.

In the financial markets, if a market falls 10%, we call it a correction, meaning price rises might have been a little too silly and needed to be corrected like a badly behaving child. A 20% slump is a crash and that’s what a lot of media headlines have been predicting for about two to three years, so the better headline for newspapers should be: “We exaggerated the property fall out! Sorry.”

I’m not expecting such a headline, however, they might not have to apologise if they keep putting out horror housing headlines and spooking consumers, who are now starting to look much more confident. And if Bill Shorten, as PM, goes with his negative gearing and capital gains changes that could end up being like Kevin Rudd’s mining tax (which was unwisely delivered as the mining boom was ending), then it could really hurt the economy and turn a 10% price fall over two years into a 20% (or more) collapse.

I don’t mind the media telling an accurate story that could have negative economic implications, especially by hurting confidence. But it’s when they exaggerate negative developments and implications of a 0.6% price fall, that really gets me cranky.

And maybe I’d be less reactionary if my media mates occasionally took positive economic stories and looked at the promising future ahead because of these optimism-creating developments.

Only this week, there was a good news economic story and that old journalistic chestnut was pulled out of the oven by journalists who were quoting an economist who had got his forecast on the subject wrong — “but it’s not expected to last.”

This is why I do what I do. When I turn negative, that’s when it will be time for you to panic. I hope that will be some years off.

For those who want to see the annual house price changes, see below. What you’ll notice is that half of the nation’s capitals are still seeing house price rises and even Melbourne has only had a minus 0.5% movement in prices over the year. Also, real estate experts think Perth’s on the comeback trail and will probably see price rises this year, and so might Darwin. 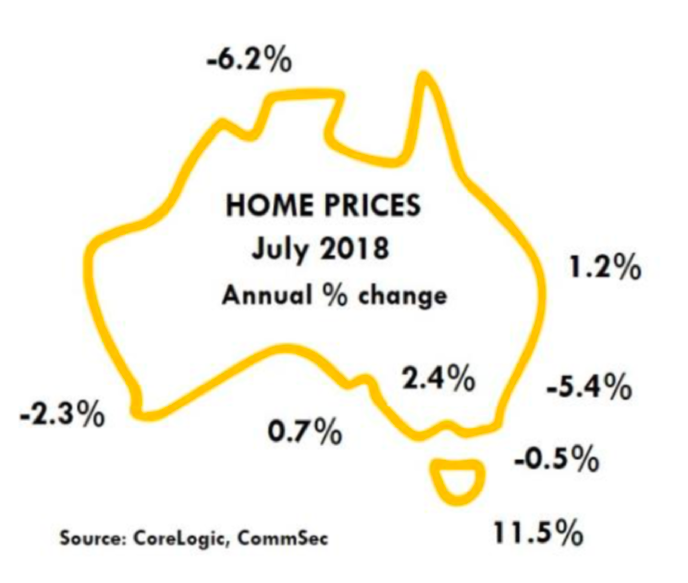