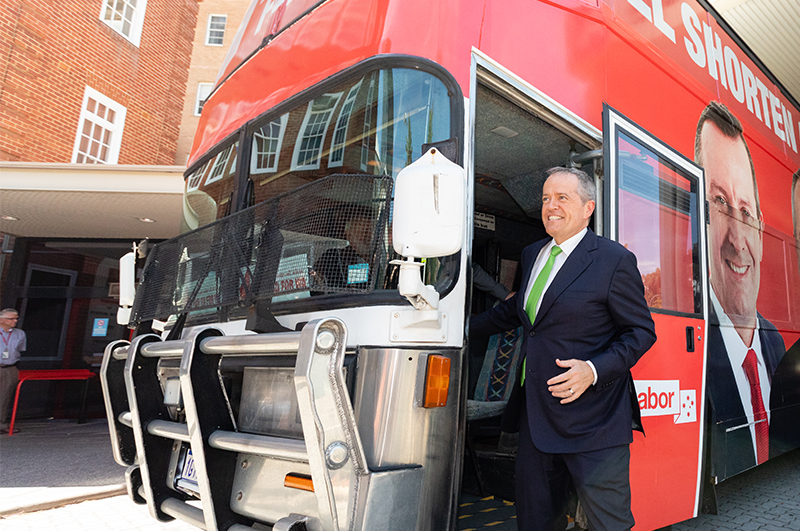 Bill Shorten stepped up and did his best impersonation of a Prime Minister on P-plates with a move to slap down the trade union bosses who think they can use our super money to pressure big companies to pay higher wages and offer better working conditions!

As I’ve been happy to bag Bill when he’s looked like a desperate Opposition leader saying and promising anything to win votes, I have to give him the thumbs-up when he sticks it to misguided union leaders, who think they can blackmail companies to get better pay and conditions for their workers.

Don’t get me wrong, I have no problem with trade unions doing what they’ve been formed to do, which is to pursue a fair day’s pay for a fair day’s work because historically not all employers have played fair. But when a union plays bully boy with our super, you have to have a leader who tells them what’s what.

In case you missed yesterday’s column I pointed out that a director on Australian Super (the biggest industry super fund in the country — and one that we’ve recommended to clients when we’ve thought an industry super fund was appropriate for our financial planning clients) was being bullied to blackmail some of our biggest companies.

This director (a trade union leader) contacted other union bosses who sit on boards and suggested that they get the boards to tell companies such as BHP to pay higher wages, implying that the stock could be dumped by the super fund and the company’s share price would fall as a result.

It’s interesting as this kind of thing has been tried before for environmental support reasons but here a super board could argue that coal is a bad, dying industry and its share price could soon fall and that would be bad for the future nest eggs of super members.

On the other hand, simply singling out companies and strong-arming them for higher wages will raise costs, cut profits and hurt share prices. And share prices and dividends paid out of profits are what’s used by industry super funds to build retirement balances of money for members in the future.

So the plan was to rob super members of future money to pay trade union employees now. This might have helped trade union members now but there are only 1.5 million signed up trade unionists but super members could number 10 million or more!

But the potential ‘crime’ could be more serious, as super fund directors have to make decisions that pass the sole purpose test, which means money has to be invested to maximize the nest egg in retirement of his or her members.

This blackmail stunt is at odds with the “sole purpose” test and that’s why Bill, if he wants to be Prime Minister, had to stand up to the unions.

“Let me be very clear here,” he said from WA yesterday. “The superannuation legislation is black and white. Trustees have to act in the best interest of their members. They've got to hang up the hat of whatever organisation they might work for or sponsor them at the door of the meeting.”

Put on the spot when asked if he agreed with what one union boss said to justify the arm-twisting of employers by super funds, this is what Bill came up with: “He's entitled to his opinion but I've given you mine. He's not running for Prime Minister – I am.” (AFR)

This is a positive sign that Bill won’t be at the beck and call of his union masters and mates if he ultimately becomes Prime Minister.

Of course, he has some policies that he needs to tweak, such as the timing of his negative gearing changes and the severity of his franking credits/tax refund ban for self-funded retirees.

Of course, if he becomes PM, he’ll have to deal with a Senate who might help him come up with more sensible decisions, but don’t underestimate the change that can come over an Opposition leader when he or she becomes the nation’s leader.

Last week I interviewed David Morgan, the ex-CEO of Westpac and the Deputy Secretary of Treasury under Bob Hawke and Paul Keating. And he made the point that the great reform policies of those Labor Governments bore no resemblance to the policies they took to the election win in 1983!

And one has to hope that Bill has learnt from Julia Gillard who went to a poll telling us that “there will be no carbon tax under a government I lead”. But under pressure from the Greens, she changed her mind in power and ultimately lost her gig in the revolving door of Prime Ministers called Canberra!