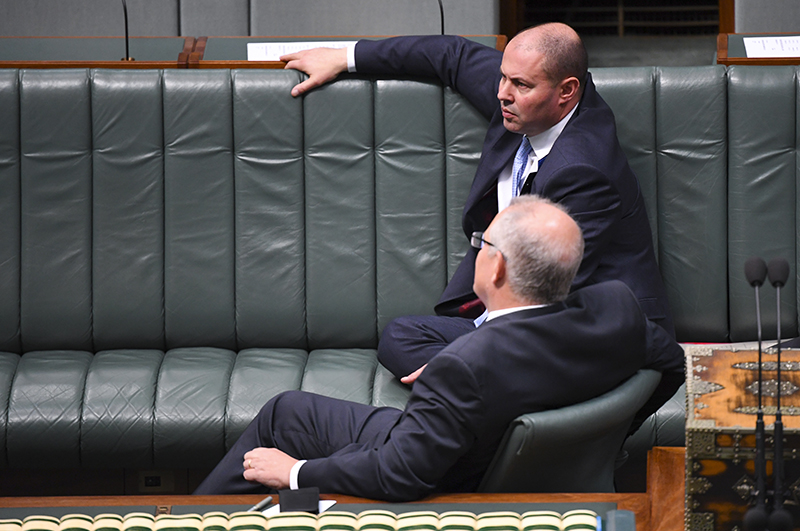 Scott & Josh, it's time to learn a thing or two from Mr Trump

If there’s one action I’d advise both the Treasurer and Prime Minister to ramp up, it’s their talking up the prospects for the economy. And if they need a role model to channel, I’d suggest Donald Trump!

This wild and wacky conclusion came to me as I perused the latest Sensis Small Business Confidence survey, which said the drivers in the engine of the country’s growth — small business owners — weren’t too positive on the prospects for the economy over the next year!

The AFR reports that: “While 22 per cent of the 1000 businesses in the survey expect an improvement in the coming 12 months, 30 per cent believe the situation will get worse. The results are consistent across all states.”

Yep, I know Donald has his shortcomings, and aren’t we glad that both Scott Morrison and Josh Frydenberg aren’t tweeters of a Trump-kind! But when it comes to talking up the US economy, he is without peer.

This chart shows US small business confidence, which has a long-term average of 98.3 since 1975.

See how it fell as the trade war and the expectation of rising interest rates spooked Wall Street. That clearly worried US small businesses. And in the most recent survey, the expectations for better business conditions increased five points, while those reporting the current period as a good time to expand advanced two points.

These guys are actually having to deal with Donald and his trade war. And while some would be beneficiaries at the expense of Chinese rivals, others would be facing higher costs if they’re using imports from China.

Many are a little nervous, with the Uncertainty Index surging in June to its highest level since March 2017, but in July the Index fell 10 points. You can only put this down to the rhetoric from the fearless leader.

Our economic growth has been slower at 1.8% against the Yanks, who have averaged 2.3%. But we’ve had a host of recent developments that should be boosting small business confidence. Like what?

In case you’ve forgotten the mounting positives (and this is my point that not enough of the heavies in Canberra are trumpeting the good stuff like Donald would), let me list them:

• Tax cuts are now being embedded into many Aussies tax refunds. About 70% of taxpayers will get up to $1,080.

• The dollar is falling. A year ago, it was 73 US cents. It’s now 67.93 US cents. And someone (other than me) should be telling Aussies that a low dollar is good for economic growth and jobs.

• On Friday we learnt that the annual number of permanent and long-term overseas arrivals rose to a fresh record-high of 850,770, up by 5.2% over the year to June. That was a record migration number! These have to be new customers for small business.

• Banks are now lending more freely and this should continue following the court decision to stop ASIC's fine for Westpac over a failure to lend responsibly.

• House prices have stopped falling and auction clearance rates are on the way up.

• And there’s better news on wages. In seasonally-adjusted terms, average weekly ordinary time earnings (AWOTE) rose by 3.1% in the year to May – the fastest growth in six years. The average annual wage is $85,010.

I could go on (and you know I could!) but as you can see, there’s a better economic story happening but someone has to take up the Trump trumpet and start belting out the fact that things are on the improve.

Despite the trade war, we have recorded 18 trade surpluses in a row and are set to register the first current account surplus in 44 years! That’s huge! And it says our exports are so good that they’re bigger than out repayment of interest, dividends, etc to overseas!

I know the media wants to distract the likes of Morrison and Frydenberg with what it cares about, but, for the sake of the economy, small business owners, the people they pay wages to and the future of the place, I think it’s time the Government started ‘controlling’ the political conversation.

And I reckon a lot of Australians would like to know that our economy is poised to improve rather than going backwards, as too many small business owners have been guessing.

It’s time to do a lot more Trump-talk to us about the good stuff that means jobs and growth.