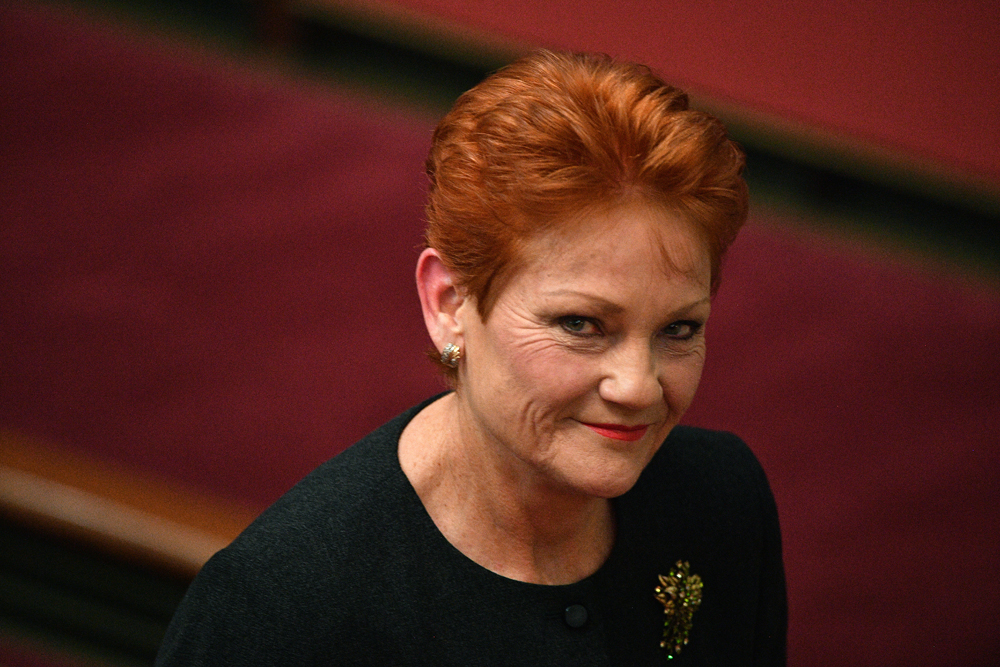 Read all about it: Pauline H rescues Mr T!

Pauline Hanson has turned out to be less taxing than her dissenters would have it, with the boss of the One Nation political party (which is shrinking before her very eyes) playing her most relevant card in supporting the Government’s tax cut legislation.

In fact, this could be seen as the former fish-and-chip lady rescuing the investment banker who always coveted the Prime Minister’s gig. And her action could be a critical rebuilding block in Malcolm’s reconstruction of his party’s political popularity.

Who would have thought that Pauline could be so important? She might’ve once wrapped hot fish and chips in old newspaper but nowadays she can be the lead story in daily newspapers!

The irony can’t be totally completed because no one wraps fish and chips in newspaper anymore! And many of us don’t even buy newspapers. But if you put aside your bias, objectively, Paul Hansen has been a massive over-achiever. And this significant political play demonstrates exactly that.

On 1 June, Pauline and her party whip, Brian Burston, had a public break up over his decision to support the Government’s tax cuts, which she had also once supported. Burston has shown himself to be a ‘good’ judge by joining Clive Palmer’s new party, with the hilarious name of the United Australia Party. Of course, the name has a nice ring but how it can be promoted by one of the most divisive blokes in Australian recent history makes it great fodder for comedians and satirists.

Clive is the gift that keeps on giving to political smart Alecs!

But I digress. Back to the big story that Pauline will support the tax cuts. In case the whole Canberra charade has left you cold, Labor wanted to pass the first year tax cuts only but the Government kept arguing it would be the whole package or nothing.

The tax package doesn’t need Labor as long as it can get most of the crossbench Senators to support it.

After welching on her former undertaking to support the tax cuts and remembering her loss of Senator Burston was linked to him wanting to honour their deal with Mr T, this change of heart by Pauline is a U-turn ripper for the Government.

This is how Fairfax Media’s David Crowe reported it: “In a dramatic day of Senate talks, Senator Hanson signalled she would not vote to block the entire plan, despite her concerns about the cost and capacity for the federal budget to return to surplus as forecast.”

If you’ve forgotten what was on the table, here’s a quick summary:

The Government says its tax cut deal helps workers on $75,000 or more, but Labor’s calculators say it helps those on $120,000 plus. Who can trust politicians throwing around numbers all based on their own favoured assumptions?

Today we learn about the fate of the tax cuts, the political future of Mr T and his Government and the relevance of Pauline Hanson and One Nation.

Pauline now only has one other Senate mate, Peter Georgiou. Once she had three! Apart from Burston, she has lost Fraser Anning to Bob Katter’s political outfit — Katter’s Australia Party!

Seriously, if taxes and who runs the country wasn’t so important, all these strange people we have in Parliament nowadays could be seen as an hilarious hoot!

Let’s hope sanity prevails today and we see the elected Government get to pass the kind of stuff it was elected to do.

The only thing I worry about is this from Crowe: “Finance Minister Mathias Cormann has negotiated support in the Senate from David Leyonhjelm of the Liberal Democratic Party, Cory Bernardi of the Australian Conservatives, Brian Burston of the United Australia Party and Fraser Anning of Katter’s Australian Party.”

Throw in Pauline and Peter and there’s a lot of unpredictable personalities who could ruin Malcolm’s Thursday.