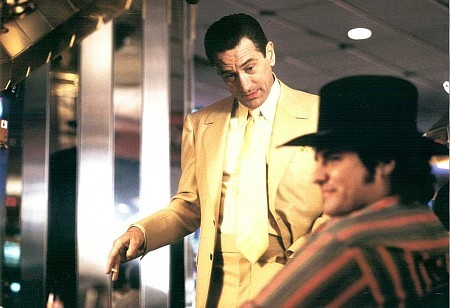 My old economics student, Treasurer Scott Morrison, has stepped into the house price problem. He is offering the idea that if we increase the supply of houses and apartments then the fact that first home buyers can’t beat investors and Chinese property collectors at auctions would substantially change.

The Labor Party, groups such as Grattan Institute and journalists such as Fairfax’s Peter Martin (who I have a lot of time for) think the combined impact of negative gearing and the capital gains tax softness explains most of our property price problem.

But I beg to differ. I think deregulation and decisions by the likes of former Treasurer Paul Keating unleashed what I call the De Niro Syndrome. More on that later.

In a story this week, Peter showed a neat chart that showed median dwelling prices were locked into a band of about 2.5 to 3 times household after-tax income, then all of a sudden it spiked to four times after-tax income. Martin emphasises that it has stayed there ever since.

As to what explains this huge jump in 1999, see the chart below, where the blue line spikes up big time. The related cause was the Howard Government’s halving of the capital gains tax, which made negative gearing more popular. 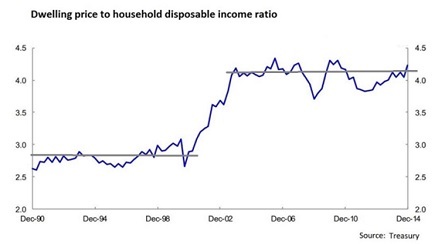 Peter is right. The tax change made it rational for smart Aussies and advisers to push property, though many didn’t in those days, because they made more money out of pushing their clients into shares. That said, it became a great encouragement for investors to go long property. However it also should have led to more supply. I suggest that Scott’s argument that barriers to developers building more supply put up by crazy State and local governments and the ludicrous tax/costs of building a home hasn’t helped the property price problem.

Figures vary from state to state and property to property, but few people argue with the suggestion that at least 30% of a newly developed property can come from government slugs or impositions.

In a nice piece from The Conversation website, entitled Inefficient tax slugs on all homebuyers, Lyndall Bryant points out: “In Queensland, where developer charges are around $28,000 per new house, this one fee alone could be responsible for over $110,000 of the house price. Over the term of a 30-year mortgage, this could be costing homebuyers in excess of $338,000 or almost $1,000 per month in extra mortgage payments.

“This is not to say developers are profiteering. The competitive nature of the development industry ensures developer margins are kept within a range reflective of the risky nature of property development. Developer fees are a supply side cost that often aren’t locked in until many years after the land is first bought for subdivision.

“Demand factors, such as low interest rates and limited supply, force up prices and land owners quickly adjust their expectations, asking more for the undeveloped land that will help with supply. Holding costs, time delays, limited supply of serviced land and imperfect data and models are all thought to contribute to this problem.”

These charges hurt supply just when historically low interest rates have been pumping up demand so house prices have gone mad in Sydney and Melbourne but in Perth they’re negative!

Sydney’s house prices went sideways for nearly a decade before the past three-four years. Why didn’t negative gearing work then to make houses unaffordable?

By the way, the GFC brought house prices down in places such as Palm Beach in Sydney and the Gold Coast by over 30%, so what goes up does come down. Maybe first homebuyers should either go to cheaper regions, states, suburbs or wait for a property price pullback.

Some first homebuyers are actually a part of the problem Peter Martin talks about, as they have become investor/landlords themselves! Many are renting and living where they want and buying an investment property that is tax-effective for their circumstances, or it might be somewhere they’ll move into when their incomes rise.

This is a rational response to the economic and tax regime they live in and is another example of what I call the De Niro Syndrome.

Laws change all the time. We see it with superannuation at nearly every Budget! The 1980s brought industry and financial deregulation and the changes wisely forced through by Paul Keating partly explain why our economy has grown for 100 quarters without a recession.

During that time however, Australians were told not to think that they’ll get the pension. Super was introduced and middle- to high-income earners were told to make their own arrangements for their retirement. And it gave birth to people in the media such as yours truly and a lot of my colleagues such as Nine’s and 2GB’s Ross Greenwood. Our job was to help people build their wealth.

A group of money savvy Aussies has developed since the 1980s and they’ve virtually said to governments “Somebody messes with me, I'm gonna mess with him.” (De Niro might not have actually said this but a hell of a lot of us think he did!)

Every time governments change the rules, all those Australians who work hard, try not to depend on the state and are wise enough to seek help via self-education or from an adviser (accountants, financial advisers, lawyers, mortgage brokers, etc.) respond to those changes. The part that annoys me is that there is a group of commentators who suggest that these people are doing something wrong. As De Niro said in Casino “There are three ways of doing things around here: the right way, the wrong way and the way that I do it.”

These people have been targeted as Aussies who need to look after themselves and when they do it, they’re seen as parasites. That’s demonstrably unfair, as they are often people who employ, train and mentor millions of Australians in the workforce and pay the top tax. They often pay other taxes that most of us don't pay such as payroll tax, which is the craziest tax of all — you tax someone for providing a job for another Australian?

Our housing price problem could be improved by increasing supply. If you don't believe me, then work out why the experts are telling us that an oversupply of apartments in places such as Brisbane and Melbourne’s docklands will lead to a pretty big price fall?