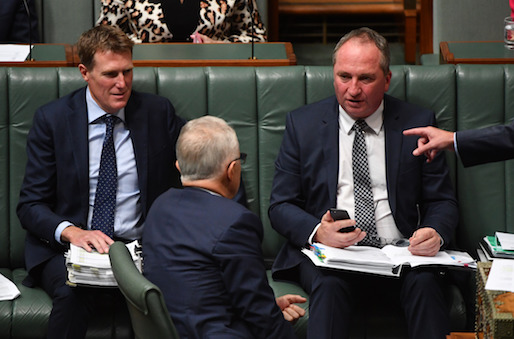 Politics and the economy need adults to take charge!

When you look around our political landscape, with the need for a Barnaby bonking ban showing us loud and clear that our leaders are struggling to look like grown ups, the question is: when are the adults going to take charge? To be honest, I like Barnaby. I’ve interviewed him on TV show and, occasionally, his rye, down-to-earth takes on life and politics can be heroic as well as refreshing. He can sound a bit dopey at times but he’s no dope, though his performance with his lover does nothing for his political credibility CV.

Quite frankly, his lover hasn’t covered herself in glory either, particularly as a media adviser. In that role, she’s supposed to improve her boss’s media image, not trash it.

This issue aside, it has surprised me how ineffective, dysfunctional governments like the Turnbull one, which has been frustrated by a Senate dominated by unusual politicians, including the Greens, has not excessively hurt the economy.

The odd upper house has meant a lot of policies that would have been good for business and the economy haven’t been passed. It can’t be proved but it’s not hard to argue that the economy would be a little stronger, unemployment would be lower, wages would be growing a little faster and so on, if business-friendly policies had been passed.

A capitalist economy tends to respond positively to business-friendly policies, though it doesn’t always deliver the social dividends left-leaners like.

Let me go back to my desire to see grown ups take over the body politic of Australia. We’ve seen new businesses (such as Uber), which break laws that taxis had to, and still have to follow, be allowed to grow without recognising the unfair competitive edge they have. Politicians have even ignored the fact that there is a potential insurance issue.

London had a grown-up moment when bad Uber behaviour saw it banned. In Texas, there is a texting in the car ban and officials say one in five car accidents are linked to drivers being distracted.

In WA, a young driver severed the foot of one police officer and injured another, while texting last week, when he ploughed his car into them while distracted by his mobile phone. This has led the Australian Medical Association, a body predominantly made up of grown ups, call for stricter enforcement of laws covering the use of mobile phones and electronic devices in cars, with a "zero tolerance" approach towards L-plate and P-plate drivers.

And the need for adults in governments worldwide was underlined by the co-CEO of Village Roadshow, Graham Burke, who thinks Google is “facilitating crime” by doing precious little on its search engine to kill piracy of movies. Burke is happy for Google to sue him as he thinks the issue needs to have its day in court. Now that’s the attitude of a grown up!

He says illegal downloads of films such as Lion and Mad Max: Fury Road caused losses of millions of dollars to his company. He told Fairfax Media that “If piracy isn’t nailed ... the Australian film industry will be over.”

In Korea, where Google is not the dominant search engine, local search platforms remove links to pirated content themselves. And while Google does say it takes the fight against online piracy seriously, it’s time politicians took the adult’s option and started making laws to improve society and the economy!

It’s staggering that the US isn’t more serious about the issue, considering how important Hollywood and its products are to its economy.

Five years ago, the US statistician investigated the importance of the arts to GDP and “creative industries led by Hollywood accounted for about $504 billion, or at least 3.2% of U.S. goods and services, the government said in its first official measure of how arts and culture affect the economy.” (hollywoodreporter.com)

Voters in places like the USA have shown they don’t think much of politicians who behave like grown ups and economies still seem to do OK but maybe we’re underestimating the importance of adults being in charge.

It could be a case of not knowing what we’re missing out on and ignorance might be bliss, except when your business is going broke and you’ve lost a job because politicians didn’t have the guts to deal with illegal aspects of digital disruption. And that’s no pun on Barnaby’s disruptive behaviour!