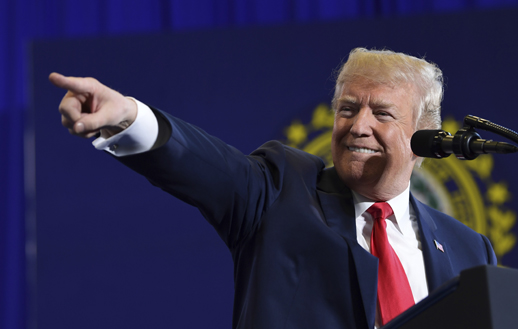 Donald tweets and stocks down... be careful what you wish for!

The usually very positive Peter Switzer started the day with the less than optimistic advice “be careful what you wish for, lest it comes true.”

My morning was greeted with the news that the Dow Jones index was down over 400 points, and this kind of news makes someone like me go chasing for the reasons for such market negativity.

Challenges for Facebook was one reason. A second was the meeting mid-week with the Fed, which is now headed up by a new boss — Jerome Powell. An interest rate rise is expected because the US economy is doing well, but what this guy says in his first post-interest rate meeting has stock players nervous. And then there’s the President many have wished for — Donald Trump — and apparently his twitter tirade over the weekend hasn’t been good for stocks!

My best guess is that the problems for Facebook, which has hurt the tech sector and the unknowns around the Fed meeting, look like the more important reasons for this sell off but Donald simply doesn’t help with his tweets and his conga line of fired ‘friends’ out of the White House.

The world is cheesed off at politicians, as the Italian election showed recently. The Yanks anti-pollie play showed up in Donald’s win over Hillary Clinton, with the latter seen as a product of the old world of ‘ignore the masses’ politics unless it’s election time.

Donald Trump was an ‘outside the square’ option and in a world where we all can be commentators via social media, the large number of pissed off voters is seriously looking at unpredictable options like the new and unusual President of the USA!

Over the weekend, Donald had been tweeting about the firing of Andrew McCabe two days before his scheduled retirement. It is thought that McCabe has incriminating documents on the President in the form of memos of conversations he had with Donald.

The President has labelled them “fake memos.” You have to admit that Donald use of the word

“Fake” has now given the world one of the funniest comebacks whenever you want to make light of accusations against you.

Unfortunately, the stock market doesn’t have a sense of humour and Donald’s tweets, his potential sacking, his tariffs, the trade war potential and the unknowns around China and Europe retaliating have all spooked the stock market.

I was never a fan of Donald Trump pre the election, mainly because Wall Street hated the idea of this maverick leading the free world, along with the US.

Then his acceptance speech was his best effort. I watched it on air, with a guest expert on my TV show and we both agreed Wall Street might give him a go. It did, and the Trump bump for stocks was a significant endorsement of the guy but the objective assessor would have to admit that Donald’s pluses — tax cuts, deregulation and plans for infrastructure spending and maybe some progress with that North Korean nutter — are now being whittled away by his less-than-wise tweeting, his Russian problems, his continual sackings and the uncertainty his Presidency lives with.

US voters wanted a maverick and they got it. So far economically and markets-wise, the punt has paid off but even his closest supporters, who are of sound mind, would like it if we saw more Presidential-style stability coming out of the White House.

If you don’t agree with my last point, then you are certifiably so pro-Trump that you can’t be objective. You are a fake commentator, who should be respected for having a point of view but you should be ignored.

All Trump fans have to hope he lifts his game politically. If you don’t, you must love anarchy because that’s what the US is getting — Trump’s version of his private version of anarchy.

If I didn’t care about wealth-building goals of my clients, my readers, viewers and listeners and their super balances, which are linked to stocks, I could simply have a laugh at Donald’s antics. But when he helps the Dow drop over 400 points, I really start wishing for a different Donald, who I’ll never regret wishing for!

For those who want an objective score on Donald and his impact on stocks and our material world, the S&P 500 was around 2085 before his great speech. It’s now 2709, so along with a good economy, which he has helped, his stocks are still 23% higher since becoming President.

However, if he gives us a trade war, thanks to his tariffs and tweets, then a lot of this stock market gain could go down the plughole, and Donald’s political stocks could go with it.

I just can’t bring myself to wish for that, for money purposes!