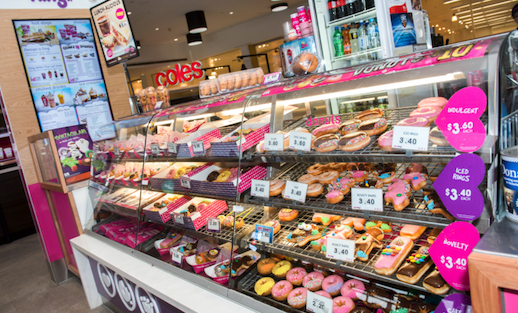 Here's one woman a company doesn't want to p*ss off!

Here’s one woman that you don’t want to get offside with and a publicly-listed company learnt this lesson when their share price fell 25% in one day!

Her name is Adele Ferguson, the Fairfax investigative journalist, who currently has the Retail Food Group and their treatment of their franchisees in her sights.

You might not know this company but you know their brands, which Tony Alford, the old CEO, collected together over a number of years. RFG, as the stock market codes the company, owns Donut King, Brumbies Bakery, Michel’s Patisserie, Gloria Jeans, Crust Gourmet Pizza and about five other food related companies!

Alford, an accountant, used to look after the finances of Michael Hutchence and INXS but his big starring role was building up RFG, whose share price last January was just over $10, but, after yesterday’s rout, is now at $3.30!

So at one stage, less than a year ago, the market was rating RFG an absolute winner but had any of the analysts ever gone out to talk to any of the franchisees?

Adele and her team at Fairfax reckon “hundreds of Donut King, Brumby's and Gloria Jeans stores were going to the wall” and while I can’t verify that number, this hard-nosed journalist named lots of franchisees, who said they were in trouble.

Adele says many are trying to sell their franchise on Gumtree, Seek.com.au and Chinese newspapers. To date, the company has not hit back but it has answered some of the criticisms.

“We reject this assertion and reiterate the fact that our success depends on the success of our Franchise Partners,” a press release said.

“If they thrive, so do we, and we are committed to finding ways to better support them, their staff and customers.”

I’m not prejudging anyone without all the facts but the stock market is not cutting RFG any slack, with its 25% smashing yesterday. And the whole affair raises two important points.

First, anyone considering going into a franchise has to really do their homework on the brand, the location of the store, the calibre of the shopping centre and their own capacity to work their butts off seven days a week.

Second, be wary of franchise operations run by public companies, unless they have a fantastic reputation for looking after their franchisees.

When this story broke, the founder of Brumby’s, Michael Sherlock, was poignant is pointing out that “a good franchise is based on happy franchisees.”

In the past, I have done speeches for Brumby’s and Gloria Jeans under their founders’ ownership and it was so obvious that the franchisor realised success was based on franchisees being happy and making money.

Sure, there were always unhappy franchisees in the past with new competitors, family problems, a shopping centre losing customer pulling power or even a poor employee performance of the franchisor explaining these money-killing issues, but the numbers were generally small.

If Adele’s right, and she generally is, then this company has a costly process ahead, restoring its name and the interest in potential franchisees buying into their systems.

But the company’s problems might not end there, as shareholders who have seen their share price halve in less than a year could easily be thinking about a class action, if the share price continues to plummet.

Over two decades ago, I wrote a piece in The Australian newspaper, when I was the paper’s small business editor, where I quoted an academic who worked with franchising to make it more professional. He said: “Once there was the wild, wild West but now there’s franchising!”

Over the past years, professionalism has crept into franchising but the big guy versus the little guy imbalance has resulted in the odd drama in a franchise system but never of this magnitude.

RFG has to get on the front foot and deal with their franchisees or this could cripple the company, which would be bad news for those franchisees not in trouble, and also shareholders. How the market reacts today will be vital. And how much ammo Adele has left to fire will also be important in this sorry saga.