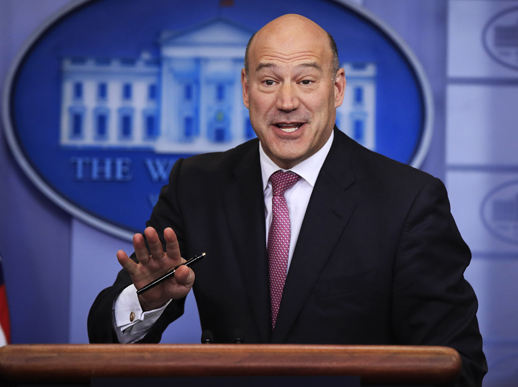 Who in the hell is Gary Cohn and why is he hurting out stocks and super fund balances? I was staggered yesterday when one of my bright colleagues admitted not knowing who Gazza was! This surprised me when you see his resignation from the Trump team in the White House has cost the Dow Jones index over 300 points before the close.

The irony of the stocks slide on Wall Street overnight was that before trading started in the US, European markets were higher on more serious talk that Europe would retaliate if Donald goes ahead with his tariffs that threaten a global trade war.

So who is the guy whose exit has created this Cohn collapse of stocks?

His very title quickly explains why Wall Street does not like his resignation. He is the President’s chief economic adviser! Tariffs are very much an economic issue and Cohn was reported widely as being against these trade war starters, so he’s basically said: “Enough is enough, I’m out of here!”

So why was Cohn rated so highly? Well, he was formerly the president and chief operating officer of Goldman Sachs from 2006 to 2017 and this outfit is seen as one of the smartest and most powerful investment houses on the planet. Many see him as a genius and that’s why Donald went after him. He’s credited with being crucial to getting the tax cuts through the Congress and now he’s gone.

I’m surprised no one has run with the Donald Trump-King Aerys II Targaryen comparison, when you see the exit of top aids from Donald’s team. This improbably named monarch is a mythical figure out of the blockbuster TV series called Game of Thrones. The mug in question is popularly called "the Mad King" and was the last member of House Targaryen to rule from the Iron Throne!

Excuse my graphic imagery for those who think in pictures as I do but who isn’t seeing the US President as an emperor with no clothes sitting on the infamous Iron Throne?

I’m sorry to do this but this picture borders on the ridiculous but it links up accurately with what seemingly is going on at the White House now.

So how nervous am I right now about the value of our stocks and inevitably your super balances, as a stock market slump could easily happen if this Trump tariff tantrum turns into a trade war?

The answer is more nervous than I was before Donald came up with this dumb idea. Sure he promised this economic madness before elected but politicians hopefully develop into real leaders when given the task to lead a country. What happens with great leaders is that they have the guts to realize that keeping a dumb promise that helped them get into power, which uninformed voters liked, would mean they would remain a politician rather than a great leader.

Great leaders become special human beings, while politicians on the hustings are often just like hustlers trying to make a sale. They will say anything to get the prize but real, memorable leaders come to know the errors of their ways when they are asked to consider the interests of an entire country.

This Cohn loss to his team is a problem as he is left with sycophants, who will tell him what he wants to hear. And so global trade and stock markets along with our stocks portfolios’ values and our super balances could pay the price unless the President starts acting and thinking like a President/leader rather than hustler/mad king!

What is needed right now is a ‘king slayer’ and undoubtedly special counsel Robert Mueller whose looking into the Trump-Russia connections pre-election could be the guy.

The latest news on that front is that a mystery man, who apparently was in a key meeting with Russians and Trump people, is now singing for Mr. Mueller.

“George Nader, a low-profile diplomatic go-between who has forged close ties to the Emirates, was stopped and questioned by the FBI at Dulles International Airport in January as he returned from an overseas trip, these sources say,” CNN says. “Since then, he has been talking to Mueller's investigators and providing information to the grand jury.”

This guy and the grand jury might one day be the king slayers who bring down the House of Trump.