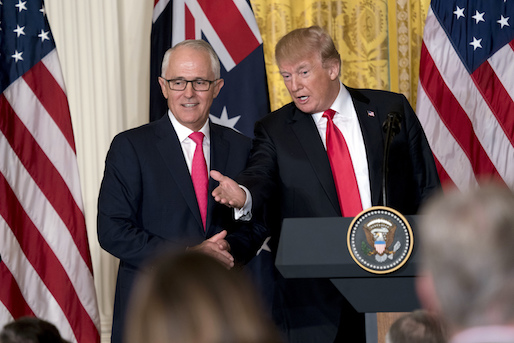 The IMF tells us to stop worrying about our trillion dollar debt!

One of the areas that normal Australians (as opposed to economists and other weirdo-types) worry about is our Government and foreign debt. I know some of my radio colleagues love to scare the pants off their audiences by telling them how much debt they rack up in a year, a month, a week, a day and even a minute!

The interest bill on our Government debt is expected to be $16.4 billion this year, which would be $1.37 billion a month! You do the maths if you want it scarier by the minute!

So, how come the weirdo economists are relaxed with this number?

Well, first there’s sufficient belief that our economy will grow pretty well over the next two or three years to bring the budget deficit down, which then reduces the Government debt to GDP figure.

The mainstream view of economists gets down to this official view that: “Australia's net government debt as a percentage of GDP in the 2016–17 budget was estimated at 18.9% ($326.0 billion); much lower than most developed countries. The budget forecasted that net government debt would increase to $346.8 and $356.4 billion in 2017–18 and 2018–19 respectively.”

On the foreign debt front, The SMH’s economics editor, Ross Gittins, today explains why the IMF is relaxed with our $1 trillion foreign debt.

This is what the world-watching debt checker said about our near trillion debt: “The external position of Australia in 2017 was assessed to be broadly consistent with medium-term fundamentals and desirable policies”.

Yeah but (as one of Little Britain’s comical characters loves to say) what if the ‘you know what’ hits the fan and our dollar dives?

In the 1980s, when foreign debt fears sunk our dollar, which increased our indebtedness to the world and helped home loan interest rates hit close to 18%, the fact that we owed so much to the world meant our lenders had to pay more for money and so did we.

Now that means if our dollar dropped, we’d still have the same Aussie dollar debt to foreigners. In fact, a lower dollar would give us a lot more local dollars when people from overseas paid us back in their own foreign dollars.

This was the opposite situation in the 1980s when we were more borrowed in US dollars and other currencies, so a depreciation blew out the debt and made us look more risky. As a consequence, we were made to pay more in interest.

And you have to love this from Ross: “The broader conclusion is that an indebted country able to borrow abroad in its own currency has a lot less to worry about. And the fact that foreigners are willing to lend to us in our own currency is a sign of their confidence in our good economic management.”

One area where we could be exposed is with our household debt, as the table below shows. 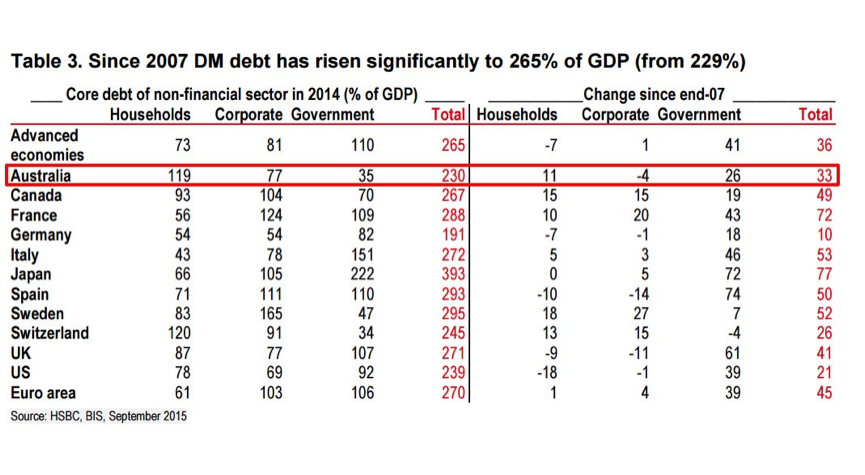 The table shows our gross Government debt is low compared to the rest of the world. And so is our corporate debt. However, households have gone for it at 119% of GDP. This worries doomsday merchants and could be a problem if a big global recession happens. But at least we’re on par with Switzerland!

By the way, we’re up again since these 2014 figures. We’re now at 120% and the IMF is a little worried about this debt. “Higher growth in household debt is associated with a greater probability of banking crises,” according to the IMF's latest Global Financial Stability Report.

And I’d be a little spooked if our economic and the global economic outlook wasn’t as positive as it is. So as GDP gets bigger as we borrow less, with the Sydney and Melbourne property booms going off the boil, then this 119% of GDP number gets smaller.

There is one bright spot and this comes from the IMF. “The IMF suggested that fallout from high household indebtedness could be softened if countries improve their financial regulation, reduced dependence on external financing, adopted flexible exchange rates and lowered income inequality,” the ABC’s Peter Ryan wrote on abc.net.au.

That’s exactly what’s happening. We are borrowing less in overseas currencies, we have a Royal Commission into our banks and wealth inequality has grown in the past but is lower now than in the years leading up to the GFC, if you believe work done by the ABS and the HILDA Survey conducted by The Melbourne Institute.

As you can see, economic growth is the key to not worrying about our debt. It’s the main reason why I continually test out whether our economy and the world economy are heading in the right direction.

Go the world and Aussie economy!