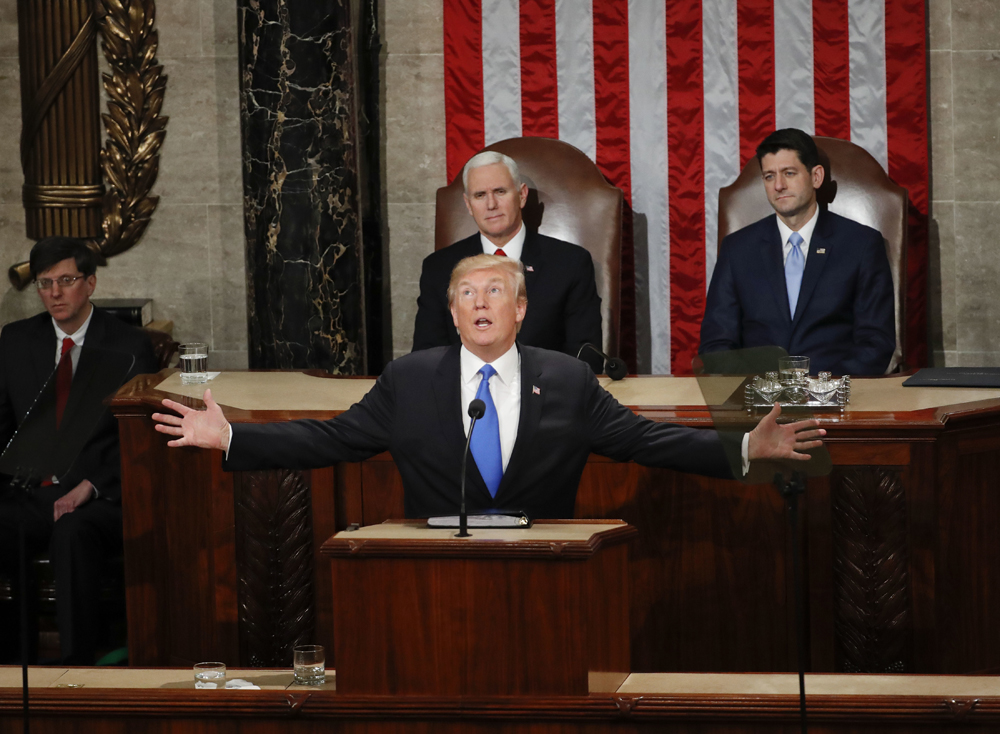 Trump proves if you've got it you don't need to flaunt it!

Fear and loathing on Wall Street, which has lasted exactly two days and took the Dow Jones Industrial Average down over 500 points, has disappeared and Donald Trump’s State of the Union speech was a big help to nervous market players.

Another speechmaker, the Fed boss Janet Yellen, also has made stock markets jumpy, this week as she makes her last post-interest rates powwow address ahead of her retirement.

Right now, the money markets have priced in only three interest rate rises for the Yanks this year but Yellen’s final farewell communiqué could change all that.

Throw into all this, that US stocks were up over 25% in 2017 and January, the rise was over 5%. And you have to think a stock market sell off for at least a few percent is way overdue.

It has led to a lot of smarties to argue that a market correction is overdue. The CEO of Swiss Bank Julius Baer, Bernard Hodler, expects a 15% correction of stocks this year and while he doesn’t have to be right, his bank manages about $US416 billion worth of assets, so he’s no nincompoop.

That said, he likes the economic and corporate stories right now but he’s a believer that stock prices have got ahead of themselves. This is linked to a great global economic comeback for the global economy and especially the USA. Also, the Chinese economy’s resilience and the spectacular arrival of Donald Trump has all added to the biggest reason for this passion for stocks — unbelievably low interest rates for a damn long time!

Bernie could be more of a disaster artist than he needs to be but it’s wise to warn any newcomers to investing that a significant sell-off some time this year is on the cards, simply because Wall Street has gone so hard.

As CNBC recently pointed out: “Prominent market commentators have noted that today's stock market is the most overvalued on record — more so than in 1929, 2000 and 2007.”

That said, I will be a buyer into any big sell off because this run up in stocks isn’t based on hot air, despite Donald’s best efforts to dispense heaps of the stuff. His tax cuts and deregulation efforts, on top of a US economy that was on an upswing, has helped the whole stocks story and the ‘fat lady’ is not about to stop singing on this fantastic money musical playing on Wall Street at least until 2020.

This was even the case made by the conservative Economist Intelligence Unit this week but others believe this bull market could run even longer. And the company reporting season in the US has helped this positivity.

According to Thomson Reuters: “Of the S&P 500 companies that had reported as of Tuesday morning some 80% have posted better-than-expected earnings, while 81% have beaten revenue forecasts.” This is a great story!

And when you have a great story as Donald Trump has with his US economy, he doesn’t have to mouth on about it.

His work speaks for itself!

In fact, overnight, the ADP private jobs sector survey reported 234,00 new jobs in January while the expert economists tipped only 185,000.

Interestingly, while Trump’s lower hyperbole State of the Union speech helped Wall Street go up, as I wrote this piece the very non-flaunting Janet Yellen was a little more concerned about inflation and the S&P 500 Index actually went from positive to negative.

Ah, the power of the word from the most powerful man and woman in the world can move markets. And you can do it without behaving like a sensationalist TV entrepreneur.

Gee I hope Donnie has learnt this lesson but I have my doubts.

Go the new and improved US President.