Here's my reply to some critics who could learn about playing the long game to build wealth. It's not a sprint. It's a marathon.

People just don't get how to build wealth!

Two emails have prompted this story today. One is from a viewer/reader who accuses me of cherry picking my dates when I say the market is up say 18% since early February. And then I received an email from a client who said she would’ve done better if she’d stayed in term deposits over the past year.

She wasn’t right but she could have been and I still wouldn’t have been all that disturbed. I’d prefer her to always make money every year but when you’re trying to build wealth the little more risky way but with the chance of making some good money, then there will be some bad years for your capital. That said, if you put together a good portfolio of assets, your income flow from your investments should be pretty good each year.

So in a year when the market went down 20% at one stage and alarmists wanted to say we were in a bear market, we actually lost 2%!

But that’s cherry picking, so why not let me pick a date such as the day when we were 6754 in October 2007, which means we’ve lost 17% of our capital but along those eight years (2008 to 2015) we should have picked up 6% in dividends and franking credits, if you have a good portfolio as good as the S&P/ASX 200 index. That’s a 48% gain and if you take away the 17% capital loss, then you’re up 31%, even allowing for the greatest stock market slump since the Great Depression! That’s about 4% a year. 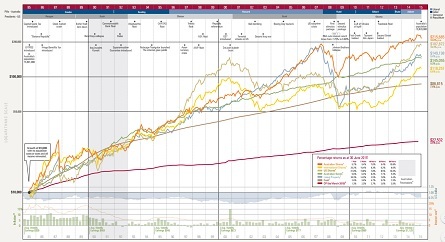 Yes, I know, I am cherry picking but the last example shows that, over time, if you’re in a good portfolio of shares, at least as good as the S&P/ASX 200 index, you can do pretty damn well out of stocks, no matter where I cherry pick from!

I fought hard on TV, radio, newspapers and here on Switzer Daily to make sure people didn’t rush to term deposits when the stock market collapsed in 2008 and early 2009. Those who stuck to quality stocks have done well. I’m a ‘keep the faith’ man when it comes to a good portfolio of stocks that pay a nice dividend. And this strategy has stood the test of time.

On the client who complained she would’ve been better in term deposits, the reality is she wouldn’t have been as she had drawn money out and forgotten that she had. She looked at her balance year to year and didn’t see it grow and was annoyed!

Looking at one year returns and complaining shows an inexperience that could really hurt your ability to grow wealth.

I invest in stocks that will return about 5-6% for dividends (maybe better). With franking credits, it can give me close to 7% per annum. If the market goes up, which it does around 7-8 years out of 10, then my portfolio does really well.

Normal people who decide to invest in stocks must understand that your capital can go up and down but if your flow of income is consistent and gives a good rate of return, then you can weather the bad times and enjoy the good times. And in those good times, you should siphon off extra income when the stock market booms and put it into a buffer bank account, in case your dividends are a little down on their average pay out to you. That said, when markets crash, dividends might fall but not crash, if you have the right stocks.

Playing stocks is more risky than term deposits. However, if you buy the stocks that stand the test of time and pay good dividends, you can really build wealth nicely, and you won’t have to work, say picking cherries in your retirement, unless you want to!