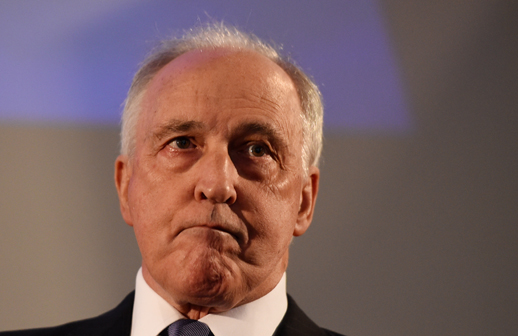 Paul Keating kept you from the poor house and here's how l'll keep you out of it!

As Wall Street struggles with the Trump tariff tantrum with stocks in and out of the red, a bigger story for average Americans (which could explain why a lot of Yanks liked Donald’s less conventional policies and thoughts) is the revelation that 42% of Americans are at risk of retiring broke.

A CNBC report into work done by a website called GoBankingRates, says 42% of Americans have less than $10,000 saved for when they retire!

This made me think of the average Aussie now whose potential nest egg is bound to be a damn size bigger because of one man — Paul Keating — and his hard-nosed policy of forcing us all into his compulsory super system.

The latest numbers I could access shows how better off we are.

The magical million number is thrown around as a good goal to have to create a comfortable retirement but, as you can see, lots of Aussies are miles away from that.

Other statistics out there tell us the following:

• 81% of retirees end up on the aged care pension.

• 40% of Australian workers are forced into retirement before they are financially ready to retire. This is due to illness, injury and many other factors.

A scary story from the SMH in 2016 said the average super balance for Aussies was $42,000 but that was a tale with some flaws, which the reporter, Jessica Irvine pointed out with the help of Challenger’s Jeremy Cooper.

He said: “Australians have more reasons to smile about their super balances than the average number suggests.”

As Jessica explained: “The first reason for reassurance is that the $42,000 figure is per account, not per person. There are nearly 30 million super accounts in Australia, meaning many Australians have access to more than one.

“According to the Tax Office, the average super balance – consolidated across all multiple accounts – of an Australian with super is a healthier $108,000.”

Another problem for retirement for Aussies is the fact that only 20% go to a financial planner. The industry website Professional Planner summed up a survey (Investment Trends 2015 Direct Client Report) that showed:

• Australians understand the benefits of financial advice, but many do not intend to turn to a financial planner for help.

• Three million Australians intend to conduct a financial activity without the help of an adviser in the next two years.

The first bit of news is worrying but I guess financial planners have not covered themselves in glory. And while I like the intention of three million of us to do something good for their finances sooner rather than later, I do worry about our inclination towards procrastination when it comes to money matters.

So I’m offering anyone who’ll listen the chance for me to become their money mentor. I’m asking people listening to my radio show, who would like to get richer, to send me an email to info@switzer.com.au and put in the subject heading “make me rich”. I will add you to a group who I’ll send out regular tips on how to build your wealth.

If people who’d rather be richer than poorer, if they were given a choice, won’t come to me for money help, I’m happy to come to them to ensure as many Australians as possible will retire wealthier.

When it comes to getting richer, I don’t think Australians plan to fail, they simply fail to plan.

There are absolutely easy things you can do to make sure your super grows faster, that you have more to put into super or more to pay off your home loan quicker but you’ll never know unless you decide to look for some great money inside information.

So if you reckon you agree with Sophie Tucker who once said: “I’ve been rich. I’ve been poor. Rich is better” and you don’t think you can get richer by yourself, email me at info@switzer.com.au and I’ll put you on my list.

Remember, you don’t get richer in a day but daily!