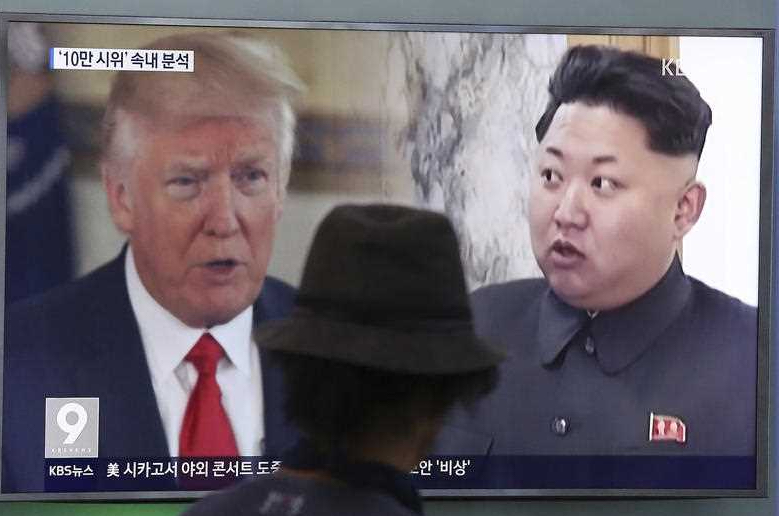 Our wealth is in Donny and Kimmy's hands!

News that North Korea has made a successful test of a hydrogen bomb has rattled European markets and because the Yanks are celebrating Labour Day, Wall Street is closed, so our market is left to its own devices. This isn’t ideal timing and given the European sell off overnight on the bomb-testing that had earthquake-like implications, it’s hard to see stocks rising today.

It’s terribly unnerving to think that our wealth via our super, our stocks-related wealth building and what happens to a world economy relies on the judgment calls of these two men.

It’s ironic that when you look at this international geopolitical scenario, you long for the day when the biggest worry was what Barack Obama and Vladmir Putin might decide to do. Sure, the latter had made some scary and negatively impactful international plays but he’s never left us thinking we could be on the eve of destruction.

Our vulnerability to decisions by politicians and governments was brought home clearly this morning when China ruled against new cryptocurrencies and the value of Bitcoin fell about $US200. I’m regularly asked about bitcoin and I asked the same question of one of Australia’s best fund managers, Hamish Douglas of Magellan, who came up with the same reply that if he doesn’t understand something, he can’t invest in it.

So, on that basis, should we get out of stocks because Kim Jong-un and Donald Trump are certainly very hard to comprehend?

This is an enormous test of Trump and his right-fit for the job as leader of the Western world and, simultaneously, it’s top global cop.

Words from the President are one thing but reactions from the likes of Wall Street are far more important to me. The Street doesn’t always get it right but if the underlying threat is bigger than we think, some smarties will have the inside information, so market movements can leave great clues.

The New York Times, which is fiercely anti-Trump, is critical of how the President is treating South Korea over this North Korean threat, which he sees as too appeasing to its northern neighbour.

Meanwhile, he’s keeping the pressure up on China to do something about their buddy to the east, with references over the weekend to North Korea being “an embarrassment to Beijing”, which looks to be more publicly condemning that it needs to be.

The President is playing a power game, considering a trade ban on any country trading with the rebel state, which again puts pressure on China.

Donald Trump’s 1987 book, The Art of the Deal, outlined his strategy when he was trying to pull off a business coup. It got down to the following
Trump steps:

So how helpful are these guidelines to him now, when trying to cut a deal with Kim Jong-un and China?

He couldn’t be having fun. My biggest fear, and that of the stock market, is that he doesn’t know his market.

This is a new world he’s playing in and, to date, we know he can win an election but his qualifications to lead the biggest economy in the world have enormous question marks over them.

Given that Wall Street was up on Friday and Europe’s sell off wasn’t dramatic, the bet right now is that the US won’t have to engage in military action. However this damn Labour Day delays us having the latest exposure to more clarity on the subject.

If this Donny and Kimmy show gets out of hand, stock markets will tumble and our super balances will be fried!

I’m betting that good sense prevails and markets will cope with geopolitical tensions (as I’ve done for decades) but Kim Jong-un with nuclear capabilities facing off with the most unconventional US President ever, makes me think, I don’t really understand all this!

And I hate my wealth/super to be in the hands of people I simply don’t trust and understand.