If Donald can avoid more bad trade talk, our top 20 should be set for a nice rebound.

Our top 20 stocks are being TRUMPED but will it last?

If we can ever see Wall Street and the world’s other stock markets (like ours), which all play follow the leader, get de-spooked by the leader of the free world i.e. Donald “the tweeter” Trump, then I reckon our top 20 stocks, as a group, should be set for a nice rebound.

I like investing in beaten up quality companies when I think the market has overreacted to more-temporary stimuli.

Right now, Donald’s tariff tweeting and the threat of a trade war, combined with our Royal Commission here, which has hurt the banks’ share prices, has collectively made the top 20 stocks perform terribly.

The following table shows all negative results for the March month and year-to-date. It’s not pretty and it’s mainly down to Donald.

The top 20 lost 4.7% and these stocks have been in the doldrums for at least two years. But when optimism takes over from negativity, driven by Donald’s tweets or maybe fears around fast-rising interest rates in the USA, then they fall like a stone.

If Donald and China can reach an agreement and the Fed is measured in its rate rising, then we could see stocks work higher.

The US economic outlook remains strongly positive and reporting season, which starts this week in the States, is expected to see an 18.4% spike in profits for the top 500 US companies in the S&P 500 Index.

Checking out the analysts’ view from FN Arena on the top 20 (current price –v- consensus target price and forecast dividend), I found: 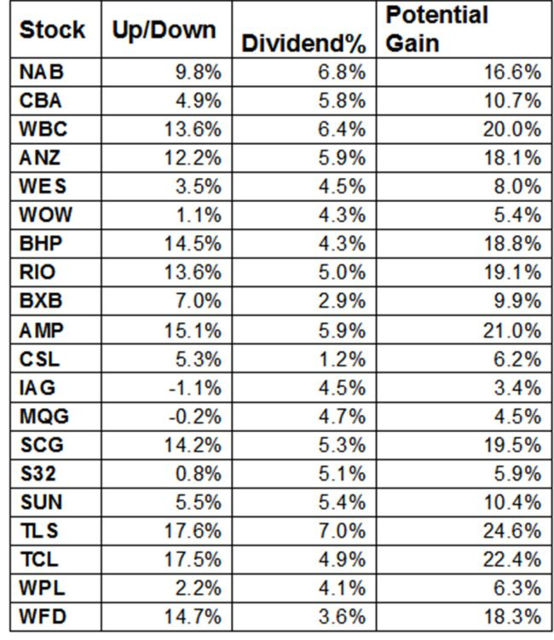 Apart from Macquarie and IAG, most of these companies look appealing from a capital gain plus dividend potential point of view. And BHP is believed to have a special dividend in store later in the year, after it sells off its shale assets.

And note you have to throw in the franking credits, which make the story even more attractive.

Of course, the capital gain predictions rest on the calibre of analysts to be right, and the dividends to stay pretty close to the past year, but the suggestion of investing in beaten up, quality companies looks pretty convincing.

If someone put $100,000 into these stocks (say allocating $5,000 to each), I calculated the capital gain would be around 10.5%.  Meanwhile, the dividend yield across the whole 20 stocks would be 4.87% before franking credits. So let’s say a 17% gain, betting on some of our best companies and businesses that would have a damn good chance of returning you good incomes, even if the stock market crashed.

I like this scenario because my Switzer Dividend Growth fund (or SWTZ) is heavily exposed to many of these companies and Donald’s tariff tweeting has coincided with the unit price falling from $2.57 on March 12.

When did the first hint of a Trump tariff play show up in the news? That was March 8. Since that time, the run of Aussie economic data has been great and there have been no new revelations from the Royal Commission.

If Donald can avoid more trade trouble talk with China and avoids a trade war, then the stock market will rebound. He should then concentrate on getting Wall Street onside before the mid-term elections in November. Our Royal Commission will end in September, and I expect more good economic, as well as corporate profit, news will be revealed locally.

It makes my bets on Australia’s top 20 companies a fairly persuasive and believable story.

But it does rest on Donald.

One final point, Rudi Filapek Vandyke came on my TV show on Monday and produced this chart, which could be good news for the top 20 stocks. 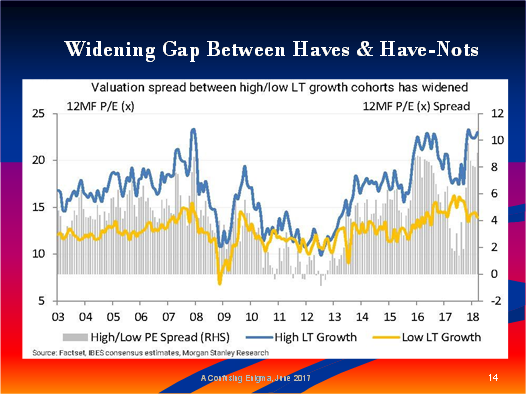 The blue line shows high performing growth companies and the yellow line shows stocks like the top 20 underperforming. The gap between the lines is what it was like in 2016, when a rotation out of growth stocks happened into the top 20 type stocks. Rudi says this big gap now could be saying that a rotation this year into the top 20 stocks is not such a wayout suggestion.

I hope for all of us and my fund’s sake that he’s right!