The Government was hyperventilating over its soon to arrive budget surplus. Economists were not as impressed, but theyâ€™re underestimating how hard it is nowadays to be fiscally responsible.

Our Budget is looking good - blame the vibe!

The one message that no one wanted to make clear yesterday when we saw our worrisome Budget Deficit shrink close to a surplus was the fact that it could have shown up sooner but Labor, the Greens and a troublesome Senate said no to more substantial changes.

This trio of groups became like that annoying prat in the TV show Little Britain, who tells a hopeful customer “computer says no!”. They became the ruination of the Coalition’s first Treasurer, Joe Hockey, who luckily escaped with a great job as Australia’s ambassador to the USA!

This opened up the job of being the country’s number one number cruncher to my old economics student, Scott Morrison, who now will not only became Australia’s 30th Prime Minister but should be able to boast that he put us on track to see a budget surplus.

Once again, while it is a laudable achievement, it has taken a long time and the troublesome Senate has got in the way of a better fiscal performance.

Fairfax economics guru, Ross Gittins, was less impressed today with the milestone of a MYEFO — Mid-Year Economic Forecast Outlook — revelation that says a surplus is nigh.

For those who missed it, the Federal Government is projecting a $5.2 billion underlying cash deficit (0.3 per cent of GDP) for the current financial year (2018-19). The May budget this year — only seven months ago — had forecast a deficit this year of $14.5 billion. A budget surplus of $4.1 billion is now expected in 2019/20 but provided we grow solidly, it could show up by the early Budget in April, which will be the Coalition’s springboard into the May election.

This is how Gittins assessed the story: “To be boasting about how much better the budget balance is looking is a bit rich, coming from a government that, five long years ago, talked its way into government by claiming we faced a "budget emergency" of debt and deficit that only the Liberals could fix because they had good economic management in their DNA.”

Ross can be a hard man to impress but given the intransigence of the Senate, I think we should cut the Government some slack.

This is how he explains the budget’s improvement: “Tax collections have strengthened in the past year or so because heavy infrastructure spending by the state governments and the rollout of the national disability insurance scheme have boosted employment and the number of people paying income tax.”

But I think it is more than that. It has been, as the lawyer in the movie The Castle would put it, “the vibe”.

And I believe this is more important than many economic experts think.

Gittins makes the correct point about the Government  breaking its fiscal promises. “Initially, the government resolved not to cut taxes until the budget was back to significant surplus,” he wrote. “Malcolm Turnbull ditched that in his first budget and the government has proposed tax cuts in every budget since.”

But looking at the facts and not remembering the history can distort the forgotten reality. The best way of being hard on the Government is to look at the growth of the net public debt, which went from $175 billion in 2013 when Tony Abbott took power and then compare it to the $355 billion it is nowadays.

This leaves out the fact that the mining boom ended around that time and so being really stingy with the Government’s coffers was never going to be a smart play.

This chart shows what happened to mining business investment: 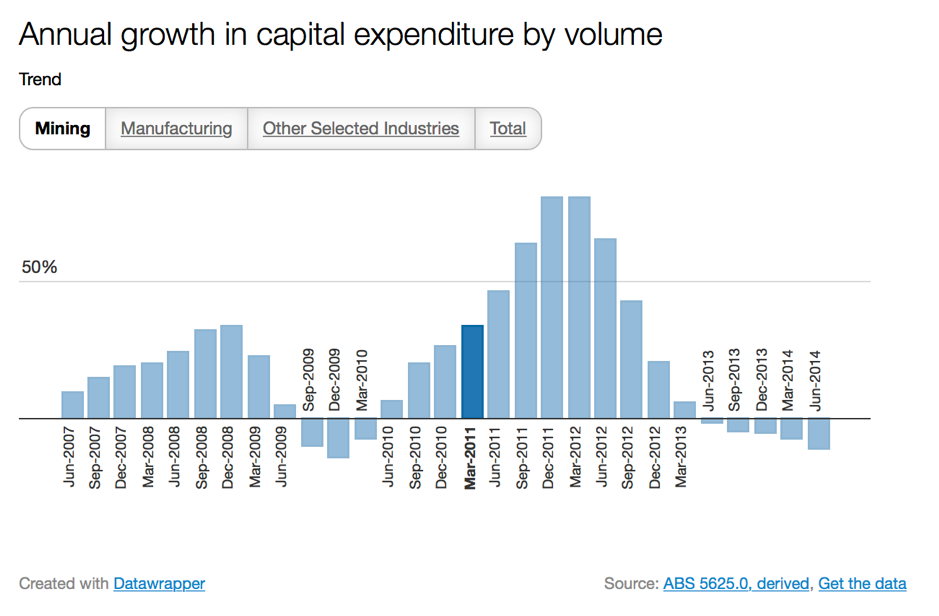 And as a consequence, economic growth faltered and unemployment increased. It went from 5.4% to a high of 6.4% and explains why the RBA cut interest rates and has kept them down ever since. We have lived through a really weird time for the Oz economy where inflation, wages and interest rates have defied history. This has come out of the post-GFC monetary world, where interest rates around the world went to zero and even lower in some countries and Amazon showed retailers that a new world was coming.

Uber changed the taxi world. Airbnb changed the hospitality world. OS airline fares became cheaper than inter-city train rides and bookkeepers in Sydney were competing with rivals in Bombay and the Philippines.

All of this happened with intensity over the past five or so years - and even though the arrival of a budget surplus  seems overdue - based on our historical memory of what Governments should do, these are strange and weird times best described by this chart of interest rates.

Once upon a time when economies grew at a 3 percent pace a central bank would raise interest rates to fight potential inflation, but this is not happening here in Australia now. And if you think the Government is to blame then you are a one-eyed commentator deserving of a radio gig as a shock jock.

We’re living in the strangest of times and I think a Budget Surplus is a nice gift but I just hope that the current stock market problems is not telling us a US recession is around the corner. Because if that happens, then this surplus could disappear before eve before it arrives!

The biggest achievement of the Abbott-Turnbull-Morrison Governments was to help businesses get confident enough to start employing Aussies. And while the jump in the terms of trade was more important for this story, the Coalition has helped the vibe and I hope a future PM Bill Shorten remembers the importance of the business vibe.

That was the test Bob Hawke and Paul Keating passed and explained why they were such a successful Labor Government that lasted from 1983 to 1996.

When you recall the actual history of a troublesome Senate, the end of the mining boom, the weird post-GFC interest rate world, the arrival of the disruptive online age and the fact that globalisation has made third world economies threats to first world rivals, you understand that creating budget surpluses are a lot harder than even smart economic experts would have you believe.