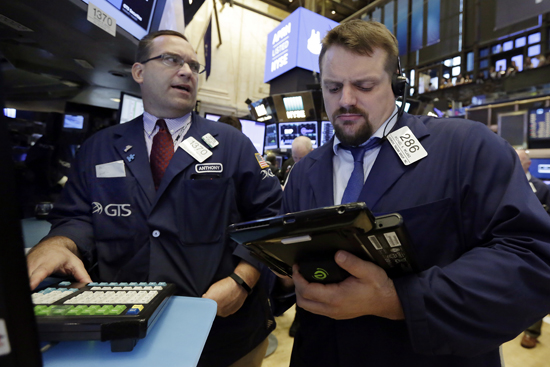 Optimists will make money this year. I'm betting on it!

After a relaxing month in Italy, where I did a lot to finish a money book that’s way overdue, I returned to TV last night and blew up!

I was furious at the stock market’s wimpy negative day, when there were good reasons for positivity. By the way, we were down early, sneaked up around lunchtime but lost 37 points by day’s end so that the S&P/ASX 200 Index finished at 5684.

The blow up was on the Final Count, which I do on Sky News Business at 5:30pm. It runs before my show at 7pm, so I had time to calm down before I went on to prove my point that market negativity, like the economic negativity out there towards our economy, is excessive.

Back to the Final Count, my colleagues — Carson Scott and Helen Dally — asked me why I was so hot under the collar after such a relaxing break.

Apart from the fear of Italian drivers on the autostradas (some drivers passed me going faster than 200 kms per hour!), the holiday was very calming. However, our market sell off and the cause (the concern about what central bankers said late last week) borders on the crazy.

It was a “well, der” moment, with the European Central Bank boss, Mario Draghi, linking a better growing Europe to interest rates having to rise one day! Yep, think about European official rates not being negative one day!

It’s as obvious as night follows day. And newspapers in Australia will have a Tony Abbott/Malcolm Turnbull story every day until some blow up happens.

Generally I railed against the gutless performance of stock players to sell, when buying makes more sense. And I made the point that if Wall Street was up overnight, I bet the wimps will jump into stocks today.

So there’s the test as the Dow put on 129 points, but was nearly 200 points higher earlier in the session.

Why so wimpy? Well, our banks are being battered by the likes of the bank levy, the proposed SA bank levy that was KO’d yesterday, the Moody’s bank downgrade, some fears about the housing sector going very negative and some soft economic data, but not much!

First, the chief economist of Morgans in Brisbane, Michael Knox, thinks there’s at least two more years where the US economy will underpin US stocks going higher. He allayed my fears about a 40% stock dumping, which was made by a forecaster who has been wrong for nine years but the media still listens to!

Finally, the AFR’s Christopher Joye, who’s also a money manager trading in government and corporate bonds with his Smarter Money Fund, did have some negative news for banks, with APRA set to make the banks hold a little more capital, which could explain some current softer share prices. That said, Joye gave me plenty of joy with his views on the Oz economy. He’s bullish.

Putting these three experts together says there’s a good reason to believe that overall stocks can go higher.

Working against this positivity are some predictions that a US stock market correction is overdue. One seriously worrying piece of news could lead to a notable sell off of stocks, but given what my three experts are saying, it would be another buying opportunity.

If nothing scary results, it’s worth noting that July is good for stocks in Australia, as AMP’s Shane Oliver’s chart below shows: 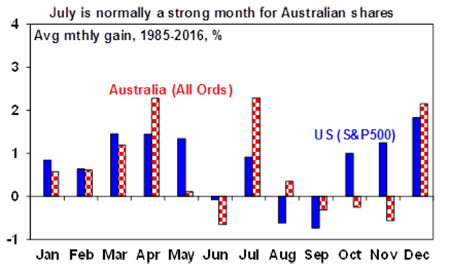 That big red and white bar over July makes me like my current positivity towards stocks.

Overnight, financial stocks did well again in the US, while tech stocks are losing friends again, after a year when they’ve surged.

When financials in the US go up, ours often follow suit, eventually, and the good old Yanks got some good manufacturing numbers, with Reuters headlining it as “US factory activity jumps to near three-year high…”

This is a good forward indicator and helps me be a proud, old optimist!

I hope the stock market today doesn’t make me go raving mad on TV tonight but, if it’s negative again, I could start to worry that I’m missing something.

It’s possible, but if I am, I’m doing it in illustrious company.

One final point. As I said, the market index is now at 5684. If my positivity is right, we should see the 6000 level this year. That means a 5.5% gain looks very possible over six months. With dividends and franking credits, this points to an 8% gain lying ahead.

I only pray that President Trump doesn’t do anything to ruin this pretty positive picture. On the other hand, if he gets his tax plans through Congress, my picture could end up being even prettier.