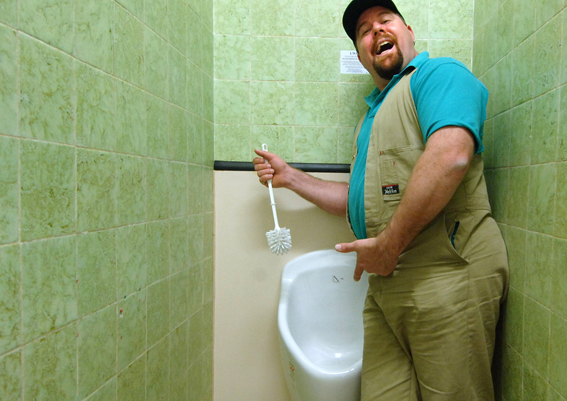 One month to B-Day. Will Joe and Tony avoid the toilet?

B-Day looms for the Prime Minister, with next month’s Budget on the second Tuesday set to be a make-it-or-break-it event for the Abbott Government and the Australian economy. The two pretty important entities have their futures entangled. If the assessment of the media is negative for the fiscal plan put forward by Treasurer Joe Hockey, then not only will he lose his job, undoubtedly his boss, Tony Abbott will be handing over the key to the Lodge to Malcolm, Julie or Scott. I bet it’s Malcolm.

Such a change would be the Coalition’s only hope to avoid being flushed down the political toilet of history as a ‘oncer’ government.

Last Tuesday, the RBA’s Glenn Stevens, basically told Tony and Joe “you’re on your own”, with no help offered to stimulate the economy via another rate cut, despite the market thinking it was only rational to do it, given how subdued our economy looks.

Even though I think Glenn was wrong not cutting, I hope he’s right and the economy is gradually sneaking back to a better pace of growth and just maybe it doesn’t need lower rates.

Tony and Joe will be hoping the RBA is right. If it backtracks and cuts rates in May, it will mean it no longer believes in the 3.5% growth rate it tipped for 2016. That will put a lot of pressure on Joe’s Budget but it also raises a big question over why he’s letting the likes of AFR run with headlines such as: “Super, pensions in Hockey’s sights”. The Australian has also been warning retirees to watch out for changes that will help the country’s bottom line but make their retirement plans a tad unsettled!

Joe's popularity as Treasurer has already fallen from a +20% approval rating to -25% in the Fairfax-Ipsos poll.

The AFR says Joe is worried about retirees sorting out their finances to get the health card and cheap medicines and that “integrity measures” in the Budget on super and pensions should be expected.

However, all these articles either don’t say (or bury deep in the story) that negative changes to super would be prospective, meaning current retirees/voters won’t be crushed in this Budget.

That said, the headlines are rattling retirees I talk to and others who want confidence to turn around to help the economy recover. Many in business, and even a prominent newspaper editor I spoke to recently, is surprised that the Coalition is allowing negative, confidence-crushing headlines to be left out there to do no good for the economy.

Of course, this could be an old budget stunt, where you let bad news out before and then surprise everyone by producing a fiscal document that’s not so hard and scary.

I don’t think the Government should be playing a risky game with the economy looking so vulnerable.

This Budget should be about putting spending cuts on hold and avoiding tax increases. It should be about getting economic growth out of the 2%-band and into the 3%-band, which would start bringing unemployment down.

Joe should be talking up infrastructure spending and job creation. He should be fighting negative headlines lest he becomes one himself, along with the PM.

PS: For market watchers, Wall Street went up, with the Dow up 98 points (or 0.55%) over the weekend. At least stock markets are working in with the Government and the economy. Imagine if Tony and Joe had to cope with a GFC-rerun! It also shows what a Fed or central bank that cares about stock markets can do for share prices and confidence!