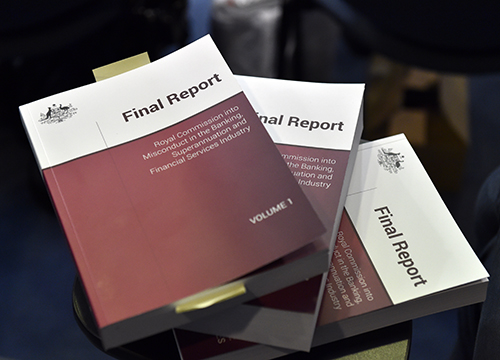 On mortgage brokers: the Royal Commission has this wrong

The Royal Commission into the finance industry has been a ripper but its plans for mortgage brokers is crazy and partly proves what a major law firm said about Ken Haynes — he’s good at the law but he might not be an expert of “community expectations”!

Commissioner Haynes has done a great job weeding out the problems in the finance industry that the greats of Australian politics have ignored — and that includes Paul Keating, Peter Costello, John Howard, Tony Abbott and even the one time Minister for Super and the Finance Industry, Bill Shorten!

One Labor pollie who can be proud of his work was Bernie Ripoll, who introduced the changes to financial planning called FOFA (or the Future of Financial Planning) that banned commissions and forced the advice industry to be more transparent. But as the Royal Commission has shown, the problems were deeper and wider than governments and public servants could imagine. It’s also possible that a lot of politicians treated the finance industry a bit like the mafia – they knew they were there doing wrong stuff but who really wants to stick their neck out to eradicate these nefarious ways?

Don’t kid yourselves when you see politicians pointing the finger at each other, as if they didn’t know what was going on. When I started my no-commissions financial planning business, I knew planners were accepting under the table commissions and recommending products because they were linked to certain financial institutions. They got kickbacks, overseas holidays/conferences, etc and conflicts of interest was rife.

Not wanting to damage my media brand, we rebated commissions and charged flat dollar fees but insurance companies made it nearly impossible for us to do a simple rebate of the commission, which in some cases could have been 120% of the first year’s premium.

This was 14 years ago and I learnt about these ways week one of operating, so I don’t know why it has taken politicians and an expensive Royal Commission to find out what was going on.

And how come the recently honoured AO journalist Adele Ferguson got the ball rolling for what turned into the Royal Commission with her work with Fairfax and the ABC? Well, that’s simple — she cared and did some work finding out what was going on.

One of the stories her whistle blower talked about was that of a bank financial planner whose behaviour was criminal and that guy got kicked out of planning for, wait for it, seven years, which means he’ll be able to practice next year!

That guy should have got life and ASIC and past governments have been too soft and too uncaring about the public they have belatedly decided to show enormous care for.

On mortgage broking, Michael Pelly from the AFR (and an ex-student of mine!) highlighted a possible flaw in Ken Hayne’s background. The crusade against this mortgage brokers by Ken and his RC team suggests that Michelle Levy, (writing in the law firm Allens’ newsletter, Unravelled) is on the money when she wondered whether Ken (who is a law expert) might not be an expert of us as normal Aussies. She didn’t exactly say that but she implied it.

When it comes to mortgage brokers, I think Ken has missed the point. He wants trailing commissions, which are 0.15% of the loan for the life of the loan, to be banned. He says this is “money for nothing” but has he really thought it through?

I’ve used these people for my loans  before I started my loan business and even though they are rivals to me (though I’m not a mortgage broker) they would get me loans cheaper than I could at the branch of a bank, and with much better service.

They can do the legwork for tricky loans when normal lenders say no and they can suggest you can refinance your loan to a lower rate. No one in ‘normal’ society really cares what they get paid so long as they go from a 5% bank branch loan to a 3.89% bank loan via a broker.

Undoubtedly, some brokers have done the wrong thing, so get a serious investigation process and deregister them. But don’t make brokers charge fees upfront that first homebuyers won’t be able to pay or fees that most of us don’t want to pay. Aussies aren’t great at paying upfront fees for advice.

This decision will force us back to the banks and it means it should be great for bank share prices!

Also when it comes to “money for nothing” normal Aussies think barristers, plumbers on the weekend, bars on Saturday nights, water-sellers at footie matches and piles of other businesses get money for nothing.

The biggest mistake highlighted by this Royal Commission has been the failure of governments, politicians and regulators to make people in the finance industry behave properly. The punished factor and the consumer investigating processes and the penalization of bad eggs is what is needed going forward.

If that doesn’t happen, the bad eggs will eventually resurface and consumers will be exploited again.

The Coalition is bound to tweak this mortgage broker recommendation but I hope our next most likely leaders — Bill Shorten and Chis Bowen — show that they can think outside of their usual square.

There are 20,000 small business mortgage brokers hoping that a better idea for their industry’s reform is out there and it will be conceived by leaders who are actually in touch with community expectations.