On Cup Day let's do the form on a real winner called stocks!

I love Melbourne Cup day and I could enjoy it more, like most Aussies, if I didn’t do a radio show at 4pm and a TV show at 7pm. But I love the way the nation gets over-excited about what the great author Frank Hardy called the “four-legged lottery!”

Last year, my very money-conscious media colleague and business partner, Paul Rickard, who was the founding boss of CommSec, said he “did the form” and came up with the winner Almandin.

Paul is a rank amateur when it comes to conveyances of a four-legged kind but is a very well trained and shrewd picker of stocks. He can do the form on Aussie companies/stocks and knows that while the Cup might be more exciting for one day a year, stocks are a much better bet.

So as my fellow Aussies spend their time trying to select a winner out of the quality nags in our big race, that Mark Twain called “the race that stops a nation”.

He said more in 1895 when he went to the Cup and what he said is a great insight into our history: “Cup Day, and Cup Day only, commands an attention, an interest, and an enthusiasm which are universal,” he said. “Cup Day is supreme. It has no rival. Nowhere in the world have I encountered a festival of people that has such a magnificent appeal to the whole nation. The Cup astonishes me.”

But stocks are better — not all stocks — however, combined in say the top 200 stocks or even better, a great portfolio of stocks that outperforms our best 200 companies, the returns are far more exciting than most of us can ever expect from the Cup.

Imagine a 21-year old called Bob who, in 1970, had saved up his pocket money and went to his first Cup with $5,000 and lost it all on wine women and slow horses.

Taking a line through my next graph — my favourite when it comes to praising stocks over alternative ‘investments’ such as horses at Flemington — his $5,000 would’ve grown into over $225,000!

The following chart looks at what happens to $10,000 invested in 1970 in the top 200 stocks and includes the stock price rises or capital gain and the income or dividends paid and re-invested in the same 200 companies. It ends after 2009, which I have selected as it is only one year after the 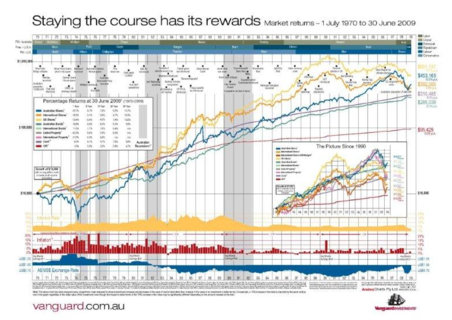 Yes I know saving each year is not as exciting as going to the Cup or Cup Day celebrations but imagine how much excitement you could have if you made an even bigger commitment to investing, not punting, in stocks.

Sure, people have lost money on stocks but they’ve tried to pick a winner and have punted too much and have ended up like Cup Day punters, who finish the day with their ‘arse out of their trousers!’

I also love stocks because, unlike gee gees, you could fail to win on price rises for some years but you still get a dividend every two months with many quality stocks. If your horse doesn’t run a place, you’ve done your dough.

Our stock market has not done as well as Wall Street since the GFC but we did better than the Yanks after the dotcom bust in 2001 and my chart shows how Bob’s money grew, despite those big market dips on the blue line, which indicate market crashes.

By the way buying property in 2009 in Sydney or Melbourne would have been greatly rewarding but I know someone who bought a house outside of Sydney in 2009 for $600,000 and with a $100,000 worth of extensions it is now worth over $1 million!

If you do the form, property is better than horses but stocks come without tenants, repairs and local councils!

Yep, do the form and select really good stocks and you’ll never have the arse out of your trousers, unless a Great Depression happens along and that’s when most investments go to custard.

Let’s not even think about that one.

For those who choose to ignore my words of wisdom, Tom Waterhouse came on my TV show last night and his mother likes her horse, Cismontane. He put a $1000 on it at 71/1 because he is a loyal son, who never underestimates his mother. His Dad, who is the student of form, likes Wall of Fire and Tom says a lot of money has come from the Irish raider called Rekindling.

The race looks so hard with so many chances I think I’ll stick to stocks such as my own SWTZ, which promises to pay dividends and a bit of capital gain most years.